The Latest: Djokovic into Australian Open final for 9th time 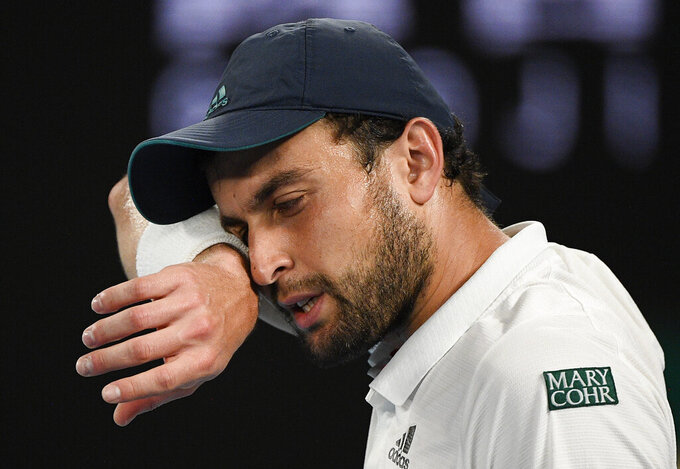 Russia's Aslan Karatsev wipes the sweat from his face during his semifinal against Serbia's Novak Djokovic at the Australian Open tennis championship in Melbourne, Australia, Thursday, Feb. 18, 2021.(AP Photo/Andy Brownbill)

The top-ranked Djokovic is 8-0 in his previous trips to the final at Melbourne Park. He is also unbeaten in all nine semifinals he has contested in Australia.

Karatsev was the first man to reach the semifinals on his debut in a Grand Slam but his remarkable run came to an end against the biggest obstacle there is to meet on the blue court at Rod Laver Arena.

The Russian qualifier was close for the first seven games and staged a comeback from 5-1 down in the second set but otherwise Djokovic was in command.

Djokovic has had an abdominal muscle problem since his second-round match but now says “this is the best as I’ve felt the entire tournament."

Barbora Krejcikova has set up a shot at an Australian Open doubles double over the next couple of days.

Krejcikova and her fellow Czech Katerina Siniakova will meet second-seeded Elise Mertens of Belgium and Aryna Sabalenka of Belarus in the women’s doubles final on Friday.

Krejcikova earned a spot in Saturday’s mixed doubles final by combining with American Rajeev Ram to win a semifinal against Australians Marc Polmans and Storm Sanders 6-3, 6-3.

Brady saved a trio of break points and converted her fifth match point when Muchova sent a forehand long to close out the 6-4, 3-6, 6-4 victory in the semifinals.

Brady will face three-time major champion Naomi Osaka for the title on Saturday.

It is a rematch of a U.S. Open semifinal won by Osaka last year.

Brady is an American who is seeded 22nd and went through a two-week hard quarantine when she arrived in Australia because someone on her flight tested positive for COVID-19.

The 25th-seeded Muchova is from the Czech Republic. She upset No. 1 Ash Barty in the quarterfinals.

Jennifer Brady and Karolina Muchova are heading to a third set in their Australian Open semifinal.

The winner will reach her first Grand Slam final and face Naomi Osaka for the title on Saturday.

Brady is an American who is seeded 22nd and had to go through a two-week hard quarantine when she arrived in Australia last month because someone on her flight tested positive for COVID-19.

Muchova is from the Czech Republic and seeded 25th. She upset No. 1 Ash Barty in the quarterfinals. ___

Osaka reached her fourth major final by beating Williams 6-3, 6-4 to stretch her winning streak to 20 matches.

Osaka broke Williams to begin the second set and was on her way.

Williams’ forehand was off the mark all match and she finished with totals of 24 unforced errors and just 12 winners.

Williams won her 23rd major championship at Melbourne Park in 2017 but remained one behind Margaret Court’s mark for the most in history.

Naomi Osaka has taken the opening set of her Australian Open semifinal against Serena Williams by a 6-3 score.

Williams broke right away and moved out to a 2-0 lead. But Osaka grabbed the next five games in a row.

Williams is trying to get closer to a record-tying 24th Grand Slam title.

Osaka is hoping to win her fourth major championship.

The winner will face Jennifer Brady or Karolina Muchova in the final on Saturday.

Serena Williams and Naomi Osaka have started their showdown in the Australian Open semifinals.

There are fans in the stands at Rod Laver Arena after the end of a local five-day COVID-19 lockdown that banned all spectators at the tournament.

Williams is hoping to get closer to what would be a record-tying 24th Grand Slam singles trophy.

Osaka is eyeing her fourth major championship. One came via a victory over Williams in the 2018 U.S. Open final.

Serena Williams will try to take another step toward a record-tying 24th Grand Slam singles title when she faces Naomi Osaka in the Australian Open semifinals.

The players are scheduled to be on court in about a half-hour at Rod Laver Arena.

Spectators are allowed back at Melbourne Park on Thursday (Wednesday night EST) after being banned for five days during a local COVID-19 lockdown.

The 39-year-old Williams already owns 23 major singles trophies, one away from Margaret Court's record for the most in tennis history.

Williams' most recent Grand Slam title came at the 2017 Australian Open, while she was pregnant. Since returning to competition after her daughter was born, Williams has reached four major finals and lost each.

The other women's semifinal is No. 22 Jennifer Brady of the United States against No. 25 Karolina Muchova of the Czech Republic.

One men's semifinal is on the schedule: No. 1 Novak Djokovic vs. Aslan Karatsev, a qualifier from Russia who is ranked 114th and playing in his first Grand Slam tournament.

Rafael Nadal — who lost in the quarterfinals to Stefanos Tsitsipas — and Roger Federer are tied for the men's record of 20.