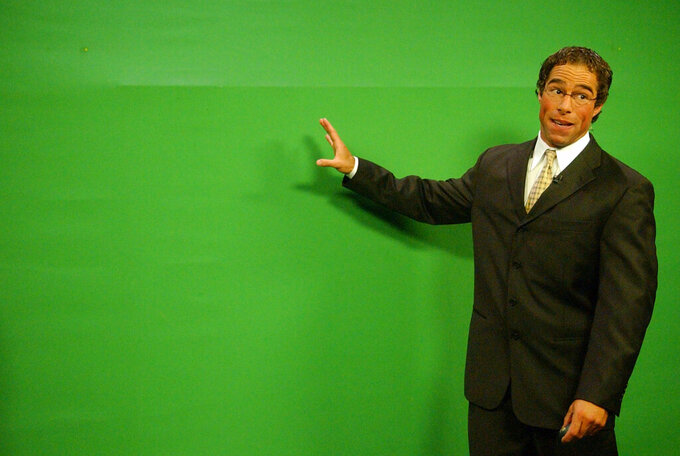 In this Oct. 5, 2006 photo, KRQE-TV Chief Meteorologist Mark Ronchetti stands in front of a "green screen" as he gives the weathercast at the KRQE studios in Albuquerque, N.M. Ronchetti announced Tuesday, Jan. 7, 2020, that he is joining the race for U.S. Senate in New Mexico. Ronchetti is jumping in the contest for the GOP nomination after stepping down for his job as chief meteorologist for the CBS affiliate in Albuquerque. (Jaelyn deMaria/The Albuquerque Journal via AP)/The Albuquerque Journal via AP)

Martinez was seeking a sixth term but his political future became uncertain after being convicted and jailed for drunken driving after rear-ending a car at a stoplight in Española last year. The Ojo Caliente resident had previously served as chairman of the powerful Senate Judiciary Committee.

Jaramillo, a Rio Arriba County Commissioner and Española resident, also has drunken driving conviction in his past.

Jaramillo will take on Republican Diamantina Storment of Chama in the heavily Democratic district.

Leger Fernandez was able to upstage Plame with support from a long list of advocacy groups for progressive causes and greater Latina representation in Congress. She landed prominent political endorsements from U.S. Rep. Debra Haaland of Albuquerque and U.S. Senator and former presidential contender Elizabeth Warren.

Leger Fernandez was making her first bid for public office as a professional advocate for Native American communities and voting rights issues.

She could become the first woman to represent the state’s 3rd Congressional District. Her nomination is likely to be decisive in the vast northern district where Democrats outnumber Republicans nearly 2-1.

Incumbent state Sen. Gabriel Ramos has lost his bid for the Democratic nomination to Siah Correa Hemphill in a district that covers much of southwestern New Mexico.

Ramos was appointed in 2019 to fill a vacant seat left by Lt. Gov. Howie Morales.

Drawing the ire of the more progressive wing of the Democratic Party and liberal advocacy groups, he opposed red-flag gun legislation signed by the governor in the wake of the August 2019 shooting in El Paso, Texas.

Ramos was among the incumbent Democrats targeted by liberal groups that have been working to push the party toward a more progressive agenda.

During the campaign, the candidates attacked each other for not supporting President Donald Trump enough.

The swing congressional race is one of many expected to draw national attention because it may help determine which party controls the U.S. House.

Garcia Holmes finished ahead of attorney Jared Vander Dussen of Albuquerque and businessman Brett Kokinadis of Santa Fe. She will face off against first-term U.S. Rep. Deb Haaland, who was one of the nation’s first Native American congresswomen.

Garcia Holmes was the Republican nominee for lieutenant governor in 2018 and had served as the chief of staff for former Attorney General Gary King, a Democrat.

She has touted her decades-long career in law enforcement, which included investigating violent crimes against women and children.

U.S. Rep. Ben Ray Luján of Nambé is the presumptive Democratic nominee, and the Libertarian Party is fielding Bob Walsch of Santa Fe.

Rochetti ran a campaign with upbeat slogans about the future and highlighted his support of President Donald Trump’s border wall in visits to the dividing line between Mexico and New Mexico. Martinez highlighted Ronchetti’s prior criticism of Trump.

Democrat Joe Biden has won the New Mexico presidential primary, his latest victory in Tuesday’s voting as he marches toward earning enough delegates to claim the party nomination before the summer convention.

New Mexico Gov. Michelle Lujan Grisham has pledged to help Biden connect with racial- and ethnic-minority voters in the state. She has also been talked about as a possible Biden running mate.

With no active opposition, Biden is already the party’s presumed nominee. But the former vice president’s haul of delegates from Tuesday’s voting pushes him closer to the 1,911 delegates he needs to claim the Democratic presidential nomination.

Voters in several states and the District of Columbia are participating in primary elections. They coincide with a time of crisis across the country. Voters have had to navigate both health concerns over the coronavirus and protests against racism and police brutality.

Polls are closing in New Mexico as major parties settle on nominees for open U.S. House and Senate seats.

New Mexico stopped accepting absentee ballots and closed its polls by law at 7 p.m. on Tuesday, with some allowances for any existing lines of voters.

New Mexico health officials are reporting an additional 227 confirmed coronavirus cases. The majority are among inmates at a detention center in southern New Mexico.

New Mexico is deciding on final contenders in open races for a U.S. Senate seat and 3rd District congressional seat that last changed hands a dozen years ago.

Statistics from the secretary of states office on Tuesday afternoon show that Democrats accounted for about 60% of primary ballots cast, amid a surge in Republican voting on Election Day.

Democrats were choosing from seven candidates in the 3rd Congressional District who hope to succeed U.S. Rep. Ben Ray Luján as he runs for U.S. Senate as the presumptive Democratic nominee. Sen. Tom Udall is retiring.

Republicans are deciding on nominees to challenge Luján for the Senate seat and first-term U.S. Rep. Xochitl Torres Small in a southern New Mexico swing district.