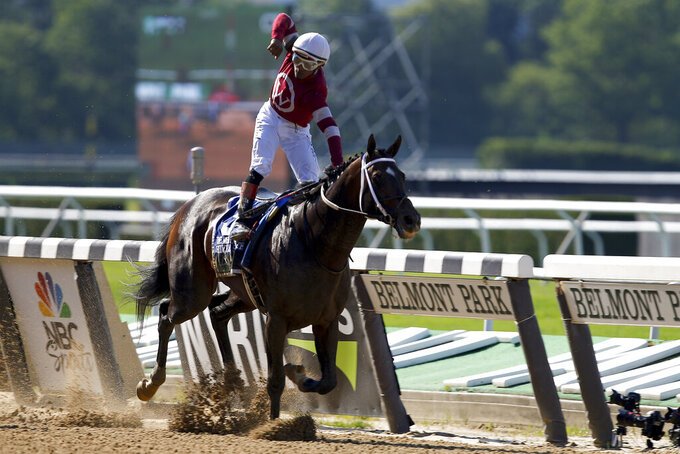 NEW YORK (AP) — The Latest on the Belmont Stakes (all times local):

Essential Quality wore down pacesetter Hot Rod Charlie in the stretch and crossed the finish line first in the Belmont Stakes.

The win was the sixth in seven career starts and gave trainer Brad Cox his first Triple Crown win.

It was also vindication for the colt, who was the favorite in the Kentucky Derby and finished fourth. Jockey Luis Saez got the colt home first this time, edging Hot Rod Charlie, who finished third in the Derby, by 1 1/4 lengths.

As opposed to a year ago when the COVID-19 pandemic forced changes in the Triple Crown races, the Belmont Park allowed 11,000 mostly maskless fans to attend the race and they reveled singing Frank Sinatra's “New York, New York” as the horses came on the track.

No fans were allowed June 20, when last year's ace kicked off the Triple Crown and was contested at 1 1/8 miles with Tiz the Law winning with Manny Franco aboard.

The race this year was run as the final jewel and returned to its traditional distance of 1 1/2 miles.

Ridden by Ricardo Santana Jr., the 4-year-old covered the mile in 1:35.45 in remaining perfect in four starts this year. The Steve Asmussen-trained colt got to the the finish line a length ahead of By My Standards.

Mischevious Alex finished third in the six-horse field, while heavy favorite Knicks Go was a disappointing fourth in his first start in the United States after running in the Saudi Cup in February.

Earlier on the undercard, Kentucky Oaks runner-up Search Results held off a late charge by Obligatory to capture the $500,000 Acorn for 3-year-old fillies

With Javier Castellano filling in for the injured Irad Ortiz Jr., Search Results covered the mile in 1:35.5 in scoring by a half length. The Chad Brown-trained Search Results paid $3.80, $2.60 and $2.10 in winning for the fourth time in five career starts.

Her only loss was in Kentucky by a neck to Malathaat, who has not raced since. Malathaat was a candidate to run in the Belmont Stakes against the colts before owners and trainer Todd Pletcher decided against undertaking that challenge.

Obligatory returned $4 and $3.10, while third-place finisher Make Mischief was $3.70 to show in the field of five.

The scene at the Belmont Stakes is a return to normalcy even if it isn’t quite the crowd of 100,000-plus that would attend if a Triple Crown were on the line. It's more quiet than usual.

Mostly maskless fans had no trouble finding room to walk around the vast grandstand hours before the running of the $1.5 million, 1 1/2-mile race. While New York State removed the cap on attendance amid easing of pandemic restrictions, officials expected a crowd of roughly 11,000 for the big race day.

There was no walkup crowd possible because fans were required to pre-purchase tickets.

A strong field of eight horses is set to run in the Belmont.

I rad Ortiz Jr. was injured in a nasty fall during a race Thursday when he was thrown off his horse in the stretch. He seemed to escape serious injury but is expected to miss some time after getting stitches on his left arm and head.

Jose Ortiz told The Associated Press on Friday that his older brother was doing well and he expected him back soon. Jose was hoping to pick up Irad’s mount and got the nod from trainer Todd Pletcher over Hall of Fame jockeys Mike Smith and Javier Castellano.

Pletcher and Jose Ortiz teamed up to win the 2017 Belmont with Tapwrit. Pletcher has three horses in the $1.5 million, 1 1/2-mile race: Known Agenda, Bourbonic and Overtook.