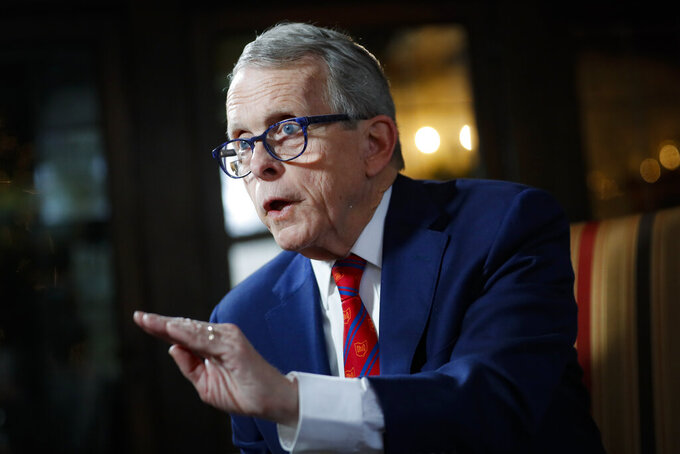 FILE - This Dec. 13, 2019, file photo shows Ohio Gov. Mike DeWine speaking about his plans for the coming year during an interview at the Governor's Residence in Columbus, Ohio. The Treasury Department on Monday, July 6, 2020, released the names of more than 650,000 companies that received funds from the government's small business lending program, a massive effort intended to support the economy as states shut down in April to contain the viral outbreak. A company owned by Ohio Gov. Mike DeWine is among those that have received loans. (AP Photo/John Minchillo, File)

NEW YORK (AP) — The Latest on the Treasury decision to identify hundreds of thousands of businesses that received funding through the Paycheck Protection Program, created to preserve jobs at smaller businesses during the coronavirus pandemic:

The list of borrowers includes a handful of banks, but the money mostly when to securities brokerages, financial advisers and hedge funds.

Real estate investment companies, which are grouped in with other financial services as part of the data, were also a big recipient of funds. And lastly, the payday loan and title loan industry, which revolves its business model around lending money at a high interest rate to distressed consumers, borrowed millions from the government — of which most will be forgiven, or have to be repaid at an interest rate of 2%.

Most of the financial services industry was not impacted as severely by the coronavirus pandemic as retail shops, restaurants, factories or the travel and entertainment industry.

A spokesperson for the Managed Fund Association, a trade group for hedge funds and other family offices, did not return a request for comment.

TGI Fridays and P.F. Chang’s China Bistro were among the big restaurant chains granted loans from the government’s Payroll Protection Program, according to data released by the Treasury Department on Monday.

Dallas-based TGI Fridays, which has around 500 restaurants in the U.S., obtained between $5 million and $10 million in loans from the program. TGI Fridays was bought by the New York private equity firm TriArtisan Capital Advisors in 2014. The firm also owns P.F. Chang’s China Bistro, which also obtained a loan through the PPP program.

The program was designed to help small businesses, but big hotel and restaurant chains were also allowed to apply. Under the PPP, Congress created $659 billion in low-interest loans that will be forgiven if employers use the money on payroll, rent and similar expenses. A message seeking comment was left with TGI Fridays.

P.F. Chang’s China Bistro says a loan from the government’s Payroll Protection Program helped it keep 12,000 workers employed and transition its restaurants to carryout during the coronavirus pandemic. Scottsdale, Arizona-based P.F. Chang’s, which has more than 210 restaurants in the U.S., received between $5 million and $10 million from the PPP program, according to the government data.

More than 4,100 oil and gas companies, including drillers, explorers, pipeline and oilfield service companies and natural gas distributors took in an estimated $2.07 billion to $4.91 billion in loans from the government's pandemic relief program.

The funds covered paychecks for more than 176,000 jobs. The American Petroleum Institute, which represents most major oil and gas companies, had said the industry was not asking for government aid or policy relief due the pandemic. But smaller operators did not hesitate to ask for help.

Kanye West’s clothing and sneaker brand Yeezy received a loan from the federal government's pandemic rescue fund worth between $2 million and $5 million, helping it save 106 jobs, according to data released by the Treasury Department on Monday.

Yeezy, best known for its $250 sneakers, just announced a major deal with Gap that will have the rap superstar designing hoodies and T-shirts that will be sold in the chain’s 1,100 stores around the world. A representative for Yeezy did not immediately respond to request for comment.

This weekend, West announced on Twitter that he was running for president.

Some other well-known fashion and retail names whose business was pummeled by store closings across the country also received loans.

The list included high-end designers Oscar de la Renta and Vera Wang and suit maker Hickey Freeman, all of which got loans in the $2 million to $5 million range.

Untuckit, a shirt retailer with 85 locations, had two loans between $5 million and $10 million. Iconix Brand Group, a publicly traded company that owns the Candie’s, Joe Boxer and Ed Hardy brands, received between $1 million and $2 million.

Retailers and manufacturers saw their revenue fall precipitously because of the shutdowns, and they were also left with a season’s worth of clothes they couldn’t sell.

A Northern California-based winery and hospitality company founded by California Gov. Gavin Newsom received a loan worth $150,000 to $350,000 from the Paycheck Protection Program, the federal rescue package aimed to help small businesses during the pandemic.

The company, PlumpJack Management Group, is part of a portfolio of brands that include an idyllic resort hotel near Lake Tahoe, five restaurants and bars, four Napa Valley wineries, a sports retailer and more.

Before taking office as governor in 2019, Newsom announced he would step away from his businesses and put his assets in a blind trust managed by Shyla Hendrickson, a family friend and attorney.

Hendrickson did not return emails from The Associated Press about whether Newsom’s businesses received any loans under $150,000, data the federal government did not release on Monday. Newsom’s office said they would get back to questions, including which jobs benefited from the low-interest loan, which the federal government will forgive if the money is used on payroll, rent and similar expenses. PlumpJack Management Group reported retaining 14 jobs thanks to the loan, which was approved on April 30.

Some elite prep schools say they have turned down loans from a federal rescue package meant to help small businesses during the coronavirus pandemic.

Choate Rosemary Hall in Connecticut was approved for at least $5 million in loans, according to Treasury Department data released on Monday. But the school said it withdrew its application after deciding the school “did not fit the organizations and businesses the program was designed to support.”

The school has an endowment of more than $370 million, according to public tax records.

The Collegiate School in New York, with an endowment of $24 million, was approved for at least $2 million in loans but also says it did not accept them.

Some other wealthy private schools, however, say they benefited from the loan program. Poly Prep Country Day School in New York was approved for at least $5 million in loans and says the money helped fund 10 weeks of employee payroll during the pandemic.

Treasury Secretary Steven Mnuchin said in May that wealthy private schools should not accept loans through the program.

The restaurant industry has been particularly hard hit during the pandemic and unsurprisingly many took advantage of the government's Paycheck Protection Program intended to preserve jobs.

M Crowd Restaurant Group, which owns 27 Texas restaurants including the Mi Cocina chain, received between $5 million and $10 million. Ray Washburne, one of the company’s founders, was vice chairman of the Trump Victory Committee in 2016 and donated $100,000 to the PAC last August.

Peter Luger, a famed New York steakhouse chain with locations in Brooklyn and Long Island, received between $2 million and $5 million. A message was left with the company seeking comment Monday.

Justice, a Republican, is considered to be West Virginia’s richest man through ownership of dozens of coal and agricultural businesses, many of which have been sued for unpaid debts. At least six Justice family businesses received the Paycheck Protection Program loans, including The Greenbrier Sporting Club, an exclusive members-only club attached to a lavish resort Justice owns called The Greenbrier.

The aid package is the centerpiece of the federal government’s plan to rescue an economy devastated by shutdowns and uncertainty. The data released by the Treasury Department presents the fullest accounting of the program thus far.

Justice, a billionaire, acknowledged last week that his private companies received money from the program but said he did not know specific dollar amounts. A representative for the governor’s family companies did not immediately return emails seeking comment.

The program was put into place to preserve jobs at smaller businesses.

CEO James Bodenstedt is also a major donor to President Trump. He has given $300,000 to the Trump Victory PAC since the start of this year, according to federal campaign finance records. A message seeking comment was left with Muy Brands.

Online lenders which often offer to consolidate loans in return for high fees also took government loans. Avant, Prosper Marketplace and Upstart were among them.

Creditcorp, a high interest-rate lender and debt collector, took out a loan of between $5 million and $10 million loan.

Private equity firms and portfolio managers were not an industry heavily impacted by the coronavirus pandemic. Their employees were largely able to keep working, and they were not industries that had to be shut down by state or local government orders. Investment managers and private equity firms also tend to be extremely well paid positions.

According to the data, those 583 companies reported saving roughly 14,800 jobs collectively with the funds from the program. That’a an average of 25 employees per company.

Rosenblatt Securites, one of the biggest names on the floor of the NYSE, took out a $1-$2 million loan.

Some familiar political names are showing up in data revealing who received funding for businesses during the outbreak.

Waterville Valley Holdings, an investment group led by the family of New Hampshire Gov. Chris Sununu, got a loan of between $350,000 and $1 million. The company is the principal investor in the Waterville Valley Resort, a ski area where Sununu, a Republican, served as CEO until just before he took office in 2017.

Vos’ spokeswoman, Kit Beyer, didn’t immediately respond to a message inquiring about why the company was seeking the money and how it’s been used.

A company owned by Ohio Gov. Mike DeWine is among those that received loans from a $600 billion-plus coronavirus aid program.

Data released Monday shows DeWine Seeds-Silver Dollar Baseball received a loan under the Small Business Administration’s Paycheck Protection Program for a range of $150,000 to $350,000. The company owns the Asheville Tourists, a minor league baseball team in North Carolina, which was purchased by the governor’s family in 2010. DeWine’s son, Brian DeWine, is the president of the baseball team.

The Treasury Department released the names of more than 700,000 companies that received funds from the government’s small business lending program.

That program was put into place to support businesses as states shut down in April to contain the coronavirus outbreak. The Treasury to date had identified just a fraction of all borrowers, naming only those companies that received more than $150,000.

But those firms made up less than 15% of the nearly 5 million small companies that received loans.