The Latest: Fla. lawyer in tobacco cases dies from COVID-19 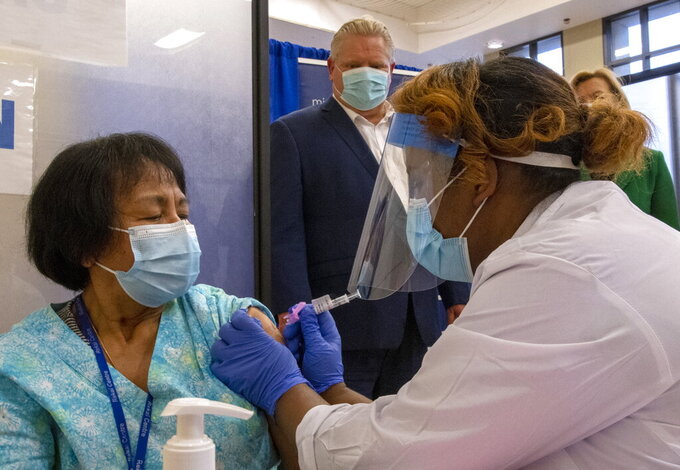 Ontario Premier Doug Ford looks on as the second dose of the Pfizer-BioNTech COVID-19 vaccine in Canada is administered to personal support worker Anita Quidangen by registered nurse Hiwot Arfaso at The Michener Institute in Toronto on Monday, Jan. 4, 2021. (Frank Gunn/The Canadian Press via AP) 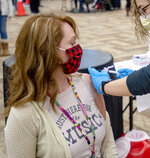 PENSACOLA, Fla. — Florida attorney Fred Levin, who won a major legal battle against the tobacco industry in the 1990s, has died several days after contracting the coronavirus. He was 83.

An attorney at the Levin Papantonio Rafferty legal firm says Levin died Tuesday from complications of COVID-19, the disease that can be caused by the virus.

The Pensacola News Journal says Levin’s career began in 1961 when he joined the law firm founded by his brother.

In the 1990s, Levin was able to get the Florida Legislature to change the state Medicaid law, allowing it to recoup money for the cost of treating lung cancer. That change helped Levin lead an effort to reach a $13 billion settlement with the tobacco industry.

The U.S. will allow more people to get coronavirus shots, including those 65 and older. China says the World Health Organization experts will begin their fact-finding visit this week in the central city of Wuhan where the coronavirus was first detected in late 2019. More lawmakers forced into the Capitol lockdown have tested positive. One lawmaker criticized Republicans who declined masks during the lockdown, calling it “selfish idiocy.”

Tokyo residents are questioning holding the Olympics in July because of the coronavirus pandemic. India has started shipping COVID-19 vaccine to cities. The EU regulator is considering the Oxford-AstraZeneca vaccine to be licensed to the 27-nation bloc.

BEIJING — Millions of Chinese are lining up in subzero temperatures to receive a second round of coronavirus tests in a city south of Beijing that is at the heart of China’s most serious latest outbreak of COVID-19.

Officials on Wednesday announced 90 newly confirmed cases in Hebei province, whose capital Shijiazhuang has accounted for the vast majority of recent cases. The Hebei outbreak is of particular concern because of the province’s close proximity to Beijing.

Travel to and from three cities — Shijiazhuang, Xingtai and Langfang — has been suspended and residents of some communities have been told to stay home for the next week.

All Shijiazhuang’s roughly 10 million people have been ordered to undergo a second round of testing as authorities seek to isolate the sources of infection.

MEXICO CITY — Mexico has posted another high for its daily increase in coronavirus cases, with 14,395 newly confirmed infections and a near-record of 1,314 more deaths.

The country has now topped 1.55 million total infections and has seen 135,682 deaths so far in the pandemic. Because of Mexico's extremely low testing rate, official estimates suggest the real death toll is closer to 195,000.

Mexico received a shipment of almost 440,000 doses of the Pfizer vaccine Tuesday, its biggest shipment to date but still inadequate for the 750,000 front-line health care workers.

Mexico has pinned much of its hopes on cheaper, easier-to-handle vaccines made by China’s CanSino. But that vaccine has not yet been approved for use.

PHOENIX — Arizona high school sports officials have voted to allow winter sports, reversing a decision made four days earlier to cancel the season because of the coronavirus pandemic.

The Arizona Interscholastic Association voted 5-4 to reinstate basketball, soccer and wrestling. The season is expected to start next week.

All students, coaches and officials will be required to wear a face covering during games and events. Each school also must complete a coronavirus monitoring form the day of every game and provide a copy to the opposing school.

Only two parents or legal guardians will be able to attend a child’s home games. The Arizona Republic reports that Association executive director David Hines says no general fans will be allowed, but that policy may be reconsidered at some point.___

BOISE, Idaho -- Idaho Gov. Brad Little says people 65 and over will be able to get the coronavirus vaccine starting Feb. 1.

The governor said Tuesday that he had adopted the recommendation of his COVID-19 Vaccine Advisory Committee.

State health officials also announced that they are immediately transitioning from limiting vaccinations to front-line healthcare workers to also vaccinating firefighters, police, K-12 teachers and staff, daycare workers and prison workers. Officials say the change is due to an expected boost in doses coming into the state.

The first group of front-line healthcare workers currently getting the vaccine numbers about 130,000. Nearly 40,000 doses of the two-shot vaccine have been administered.

WICHITA, Kan. — Students in Wichita, Kan., are resuming in-person learning, and bars and restaurants in the Kansas City area can stay open later while keeping limits on capacity because of the pandemic.

The Wichita school district is bringing elementary students back to classrooms Wednesday, after sending them home late last year because of a lack of substitute teachers and rising coronavirus cases.

The district plans for middle and high school students to begin later this month a hybrid mode of in-person learning part of the time and at home the rest. The older students have been remote learning since the start of the academic year.

Meanwhile, bars and restaurants in the Kanas City area are being allowed to remain open past midnight starting Wednesday as officials seek to help the businesses.

BATON ROUGE, La. — Louisiana Gov. John Bel Edwards is calling on the state’s employers to keep workers at home if possible, but the governor says he won’t tighten his current pandemic restrictions on businesses any further.

Edwards said Tuesday that he has renewed the same coronavirus rules that have been in place since late November. They had been scheduled to expire Wednesday.

Those rules include a statewide mask mandate and provisions limiting bars to outdoor and delivery service. They also include restrictions on the number of customers allowed in nonessential businesses such as restaurants and salons.

CHICAGO — Illinois’ top doctor has received a COVID-19 vaccine at a clinic in suburban Chicago.

Department of Public Health Director Dr. Ngozi Ezike gave an emotional address Tuesday before getting the shot saying she was getting vaccinated for her family and hopes vaccinations are soon widespread.

She calls the vaccine the next step toward “getting our normal lives back.”

SALT LAKE CITY — The owner and CEO of a Utah pharmacy has been accused of mislabeling large amounts of malaria drugs imported from China that outgoing President Donald Trump incorrectly touted last year as a “miracle” treatment for the coronavirus.

Dan Richards, the operator of Meds In Motion, was charged Monday with a misdemeanor for receiving large amounts of chloroquine and hydroxychloroquine from an unregistered manufacturer in China that were incorrectly labeled as Boswellia serrata extract, an herbal supplement.

The U.S. Food and Drug Administration revoked permission to use the drug to treat the coronavirus last year.

TUNIS, Tunisia — Tunisia’s government is imposing a nationwide four-day anti-coronavirus lockdown starting Thursday, which coincides with the anniversary of the toppling of the country’s autocratic leader 10 years ago.

Health minister Fawzi Madhi announced the measure, noting the lockdown through Sunday will include an overnight curfew from 4 p.m. to 6 a.m. Schools are also being shut for 10 days from Thursday.

Thursday marks the 10th anniversary of the ouster on Jan. 14, 2011, of former Tunisian President Zine El Abidine Ben Ali. The autocrat led Tunisia for 23 years before the eruption of nationwide protests that inspired what became known as the Arab Spring. The movement unleashed revolt across the Arab world, toppling several autocratic leaders. Ben Ali died in 2019.

NEW YORK — Gov. Andrew Cuomo expanded the vaccine eligibility requirements in New York to include anyone over the age of 65.

Cuomo said Tuesday the state is following new federal guidance issued by the CDC. On Monday, people age 75 and up and a much longer list of workers, including transit employees, grocery clerks, teachers, police officers, firefighters and others became eligible to get the vaccine.

Cuomo says it will take six months to vaccinate 7 million New Yorkers, less than half of the state’s 19 million residents, if the state keeps receiving only 300,000 vaccine doses a week.

He added he wants to open rapid testing sites in New York City and eventually other city centers throughout the state.

BOSTON — Massachusetts is preparing to open its first mass vaccination site this week at Gillette Stadium.

Starting Monday, the site will begin giving shots to first responders and administer up to 300 doses a day. Capacity will expand over time to up to 5,000 doses a day or more, eventually extending to the general population.

On Monday, the state began administering vaccine doses to first responders, including police, firefighters and EMTs. Vaccines are not expected to be available to the general public until April.

TORONTO — Canada’s most populous province of Ontario is issuing a stay-at-home starting Thursday, with exemptions for essential activities such as accessing health care or shopping for groceries.

Ontario reported 2,903 new coronavirus cases on Tuesday, including eight new cases of a variant from the United Kingdom. Ford says schools in many regions will remained close for in class in learning until Feb. 10.

MADRID — Spain is reporting 25,438 coronavirus cases and more than 400 deaths for the second day in a row.

However, the Health Minister Salvador Illa says the country is trying to avoid a strict lockdown that impacted the economy in March.

Spain has 2.1 million infections and at least 52,000 confirmed deaths.

ASPEN, Colo. — The Aspen area will close indoor dining at restaurants on Sunday as the county reports the highest incidence rate for the coronavirus in Colorado.

The Pitkin County Board of Health’s unanimous decision will limit lodging capacity in Aspen and Snowmass Village to 50%. Ski mountains will remain open without a reservation system.

Outdoor dining, takeout and delivery at restaurants will still be available. Tables can only contain people from within the same household.

CHICAGO — A Democratic congressman from Illinois who was forced to go into lockdown during last week’s deadly siege at the Capitol has tested positive for COVID-19.

U.S. Rep. Brad Schneider issued a statement Tuesday saying he was “forced to spend several hours” confined with other lawmakers and is criticizing Republican members of Congress who refused to wear masks that were offered during the lockdown.

He says he’s in strict isolation and worried about the health of family members. At least two other Democrats, Rep. Pramila Jayapal of Washington and Rep. Bonnie Watson Coleman of New Jersey, announced positive tests.

PHOENIX — Arizona set a one-day record for daily deaths at 335 and hospitalizations topped 5,000 for the first time.

With its health care system struggling to cope, the state had a record 5,082 COVID-19 patients occupying inpatient beds on Monday. That included a record 1,183 in intensive care beds.

The government this week must extend, lift or tighten restrictions that expire on citizens’ travel and on businesses such as restaurants and cafes.

Italy added 14,242 coronavirus infections on Tuesday, increasing the tally to 2.3 million cases. There have been nearly 80,000 confirmed deaths, sixth highest in the world.