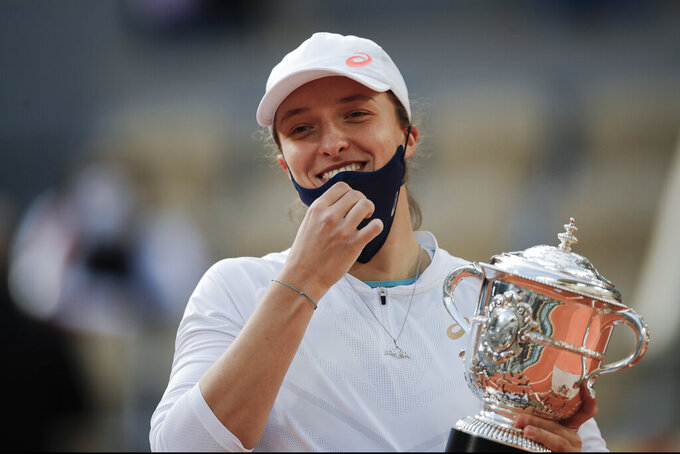 FILE - In this Saturday, Oct. 10, 2020 file photo, Poland's Iga Swiatek holds the trophy after winning the final match of the French Open tennis tournament against Sofia Kenin of the U.S. in two sets 6-4, 6-1, at the Roland Garros stadium in Paris, France. French Open champion Iga Swiatek said she will quarantine after meeting with Poland President Andrzej Duda. Duda's office announced Saturday, Oct. 24, 2020 that he tested positive for coronavirus. The 19-year-old Swiatek met with Duda on Friday. (AP Photo/Christophe Ena, File)

Duda’s office announced Saturday that he tested positive for the coronavirus. The 19-year-old Swiatek met with Duda on Friday.

The Polish player said on Twitter that she has no symptoms but that she'll quarantine due to protocols. She said she gets tested regularly and will be tested again in three days.

Duda’s spokesman said the leader feels well and is in isolation. Many of his duties are ceremonial.

Duda and the Swiateks wore masks and gloves but stood close and shook hands when the president pinned the awards on them.

The French women's basketball team owned by NBA great Tony Parker had its season stalled yet again by the coronavirus pandemic.

The Lyon team rescheduled its first five games of the league season because it had six COVID-19 cases.

Parker's team announced this week that its latest tests were all negative and that it would host Charleville-Mézières on Saturday.

But the visitors reported a positive case on their roster Friday after arriving in Lyon. They went into isolation and the game was called off.

Parker was a four-time NBA champion with the San Antonio Spurs. He retired in 2019.

His women's team won the French title in 2019. Last season was canceled because of the pandemic.