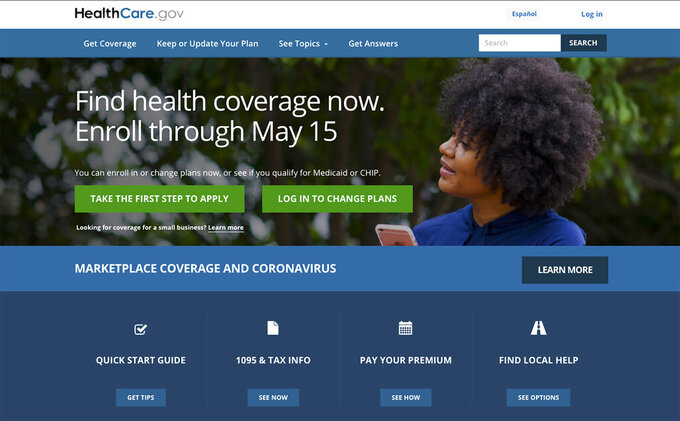 FILE - In this Feb. 15, 2021, file image shows the main page of the HealthCare.gov website. More than a half million Americans have taken advantage of the Biden administration's special health insurance sign-up window keyed to the COVID-19 pandemic, the government announced Wednesday in anticipation that even more consumers will gain coverage in the coming months. (HealthCare.gov via AP)

HELENA, Mont. — Montana Gov. Greg Gianforte has issued an executive order banning the development or use of vaccine passports in Montana.

Vaccine passports are documents that could be used to verify coronavirus immunization status and allow inoculated people to more freely travel, shop and dine.

The move by Gianforte on Tuesday comes as vaccine passports have drawn criticism as a heavy-handed intrusion into personal freedom and private health choices. Gianforte says in a statement that he encourages all Montana residents to get vaccinated but that it is “entirely voluntary.”

Vaccine passports have been implemented in New York but the White House has said there will not be any federal vaccine passport program.

CASES: The seven-day rolling average for daily new cases in the U.S. rose over the past two weeks 65,785.4 on March 29 to 68,959.6 on Monday, according to Johns Hopkins University.

DEATHS: The seven-day rolling average for daily new deaths in the U.S. did not increase over the past two weeks going from 1,001 on March 29 to 962.4 on Monday, according to Johns Hopkins University.

HOLLAND, Mich. — A western Michigan restaurant owner who spent four nights in jail for violating coronavirus-related orders is firing back weeks later with a demand that $15,000 in fines be refunded and contempt findings dropped.

An attorney for Marlena Pavlos-Hackney said her rights were violated during a contentious court hearing on March 19.

State regulators yanked Pavlos-Hackney’s food license in January for serving indoor diners and breaking other rules related to preventing the spread of COVID-19. But the restaurant, Marlena’s Bistro and Pizzeria in Holland, stayed open in defiance.

Pavlos-Hackney refused to turn herself in to face a contempt hearing. She was arrested and spent four nights in jail until authorities were convinced that her restaurant would stay closed.

Attorney Robert Baker, who wasn’t hired until Pavlos-Hackney was arrested, said a judge questioned her without recognizing that she had a lawyer. He said there was “no testing of any evidence” or an opportunity to cross-examine or produce witnesses.

A message seeking comment was sent to the attorney general’s office.

AMSTERDAM — The Dutch government has presented a roadmap for relaxing coronavirus lockdown measures, but caretaker Prime Minister Mark Rutte is stressing that it is still too early to ease restrictions.

In a nationally televised press conference Tuesday, Rutte said hospitals in the Netherlands are as crowded with COVID-19 patients now as they were during the first wave of the pandemic last year and that it would be irresponsible to relax the country’s months-long lockdown now.

The government had previously said it hoped the first relaxation could have started April 21, but Rutte said that was too soon.

Earlier Tuesday, the Dutch public health institute said the number of new coronavirus infections rose 6% over the past week to 51,240, with the largest increase in positive tests recorded among children aged 13-17 years.

The increase comes despite the months-long tough lockdown in the Netherlands including a nighttime curfew, closed bars and restaurants and shuttered public institutions like museums and zoos.

Some individual insurance customers could receive premium credits or rebates of nearly $300 on average, according to an analysis of government data from the non-profit Kaiser Family Foundation.

The Affordable Care Act requires insurers to give customers refunds or premium credits if they don’t spend certain percentages of the premiums they collect on care and costs related to it.

Kaiser’s analysis noted that last year hospitals and other care providers canceled surgeries and non-essential care early in the pandemic and then during subsequent COVID-19 spikes.

Kaiser Vice President Cynthia Cox said nearly half of customers in the individual market receive these annual rebates. Some people with employer-sponsored coverage also may get rebates that they share with their company.

Rebate totals will be finalized later this year. They generally are then delivered by the end of September. The totals will vary by market and depend on factors like whether an insurer has already offered premium breaks to counter the drop in care.

WASHINGTON — The nation’s capital city joined a growing list of states in suspending the Johnson & Johnson COVID-19 vaccine that’s become the focus of a federal examination of rare blood clots.

District of Columbia health director Dr. LaQuandra Nesbitt says she’s not aware of any cases of dangerous blood clots among the 16,000 Washingtonians who had received the J&J one-dose vaccine before the temporary halt recommended by federal health authorities.

“This pause means that the system is working properly,” Nesbitt says.

J&J said in a statement Tuesday it was aware of the reports of blood clots, but that no link to its vaccine had been established.

A CDC committee will meet Wednesday to discuss the cases. The FDA has launched an investigation into the cause of the clots and low platelet counts. There have been six reported clots among the 6.8 million shots administered.

U.S. health authorities cautioned doctors against using a typical clot treatment, the blood-thinner heparin. “In this setting, administration of heparin may be dangerous and alternative treatments need to be given,” the FDA and CDC say.

Washington state, Idaho, California, Alabama, Wisconsin, Colorado, Nevada and Alaska are among the states that have temporarily halted or have recommended pausing the use of the Johnson & Johnson shot amid the investigation.

BERLIN — South Africa has suspended giving the Johnson & Johnson vaccine as a “precautionary measure” following the FDA decision in the U.S. to pause the use of the vaccine while rare blood clots are examined.

All six cases were in women between ages 18 to 48, including one who died. The unusual clots occurred six to 13 days after vaccination.

South Africa has given more than 289,000 shots of the J&J vaccine to the country’s health workers without any reports of blood clots, Health Minister Dr. Zweli Mkhize says.

He says South Africa is halting the use of the J&J doses “out of an abundance of caution.” He expects the questions regarding the J&J vaccine should “be cleared within a matter of days.”

OTTAWA, Ontario — The Public Health Agency of Canada says it has received a report of an adverse event involving blood clots after someone in Canada received the AstraZeneca vaccine.

This is the first such reported case in Canada. The federal agency says the person is recovering at home. The vaccine was the one produced at the Serum Institute of India.

In a televised address following a Cabinet meeting, Erdogan says the government was re-imposing bans on intercity travel, barring people above age 65 and those below 18 from using public transport, re-adjusting public sector shifts and working hours, closing down sports and leisure centers and expanding nighttime curfew hours to combat the surge in infections.

Weddings, engagement parties and other crowded gatherings will be barred until after a holiday that follows the month of Ramadan. He warned of stricter measures should the new restrictions fail to bring the infections down.

BERLIN — Johnson & Johnson says it is delaying the rollout of its coronavirus vaccine in Europe amid a U.S. probe into rare blood clots.

The announcement came after regulators in the U.S. say they were recommending a “pause” in the administration of the single-dose shot to investigate reports of potentially dangerous blood clots.

The delay is another blow to vaccination drives in European Union member nations, which have been plagued by supply shortages, logistical problems and concerns over unusual blood clots in a small number of people who received the AstraZeneca vaccine.

The blood clot reports prompted several countries in the 27-nation bloc to limit the AstraZeneca vaccine to older age groups, who are more at risk from serious illness when infected with the coronavirus.

WASHINGTON — The Pentagon says it is immediately pausing the use of the single-dose Johnson & Johnson COVID-19 vaccine, amid reports of potentially dangerous blood clots.

The announcement came as Johnson & Johnson says it is delaying the rollout of its vaccine in Europe, and U.S. regulators recommended a “pause” in the administration of the shot.

Pentagon spokesman John Kirby says the department is reviewing its distribution of vaccines to address the issue and will continue to provide other shots to defense personnel.

In a joint statement, the Centers for Disease Control and Prevention and the Food and Drug Administration announced it was investigating clots in six women in the days after vaccination, in combination with reduced platelet counts. More than 6.8 million doses of the J&J vaccine have been administered in the U.S.

Dr. Janet Woodcock, the Food and Drug Administration's acting commissioner, said earlier Tuesday the agency "expects it to be a matter of days for this pause.”

Regulators say they want to educate patients and medical professionals about spotting and treating the clots. The clots were observed along with reduced platelet counts, making the usual treatment for blood clots, the blood thinner heparin, potentially “dangerous.”

PARIS — France suspended all flights from Brazil on Tuesday amid mounting fears over the particularly contagious coronavirus variant that has been sweeping the South American country.

Although France has seen comparatively few known cases of the P.1 variant striking Brazil, the ravages it is causing in Latin America’s largest nation are increasingly raising alarm bells in France.

Castex noted travelers from Brazil already needed to test negative for the coronavirus before their departure and upon arrival in France and quarantine for 10 days. But the government has been facing mounting calls from health experts for a flight suspension to further limit potential spread.

The country is struggling with another wave of coronavirus infections and hospitalizations that is straining hospitals in Paris and elsewhere.

NEW DELHI — India is experiencing its worst pandemic surge, with average daily infections exceeding 143,000 in the past week.

The spike is particularly alarming because India is a major vaccine producer and a critical supplier to the U.N.-backed initiative that aims to help distribute shots fairly. Already the rise in cases has forced India to focus on satisfying its domestic demand and delay deliveries elsewhere.

When infections began plummeting in India in September, many concluded the worst had passed. Masks and social distancing were abandoned, while the government gave mixed signals about the level of risk. Then cases began rising again in February.