The Latest: Greg Norman in hospital after father-son tourney 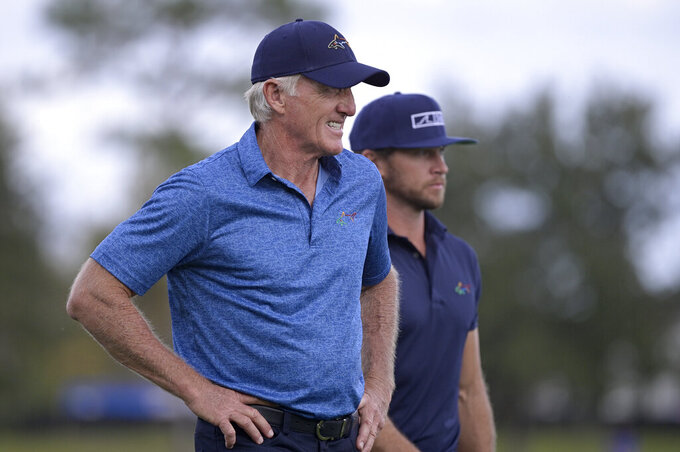 Greg Norman, left, of Australia, walks with his son Greg Norman Jr. on the 18th fairway after hitting their tee shots during the first round of the PNC Championship golf tournament, Saturday, Dec. 19, 2020, in Orlando, Fla. (AP Photo/Phelan M. Ebenhack)

Golf Hall of Famer Greg Norman shared photos on social media Friday suggesting he has been hospitalized with COVID-19.

The 65-year-old Australian posted a video on Instagram on Thursday night saying he was experiencing coronavirus symptoms, then posted photos Friday showing himself in a hospital bed.

Norman’s son, Greg Norman Jr., also said on social media that he and his wife, Michelle, have tested positive. The Normans played in the father-son PNC Championship in Orlando, Florida, last weekend.

The elder Norman said Thursday that he had flu-like symptoms, including a mild fever, a cough, aches and pains, and a mild headache. He said he took a virus test Tuesday that came back negative, but he was in self-quarantine anyway.

He was apparently admitted to a hospital Friday, sharing a photo of himself in a hospital bed and another of a medical professional in head-to-toe personal protective equipment.

Jefferson, who also oversees wide receivers for the team, has been deemed a high-risk close contact with someone who tested positive for COVID-19.

This is Jefferson's second season with the Jets after being hired by head coach Adam Gase. He's a former NFL receiver for the Chargers, Patriots and Falcons.

The person spoke to The Associated Press on Friday on condition of anonymity because the school has not publicly announced the decision.

The team said two staff members also tested positive and that all four are self-isolating in accordance with Premier League and government protocols.

Gabriel Jesus has been slowed by injuries and has just four goals this season in all competitions. The Brazil forward scored 23 goals in 53 games last season.

England defender Walker is in his fourth season with City.

The club said it wished all four “a speedy recovery over the Christmas period ahead of their return to work, training and competition.”