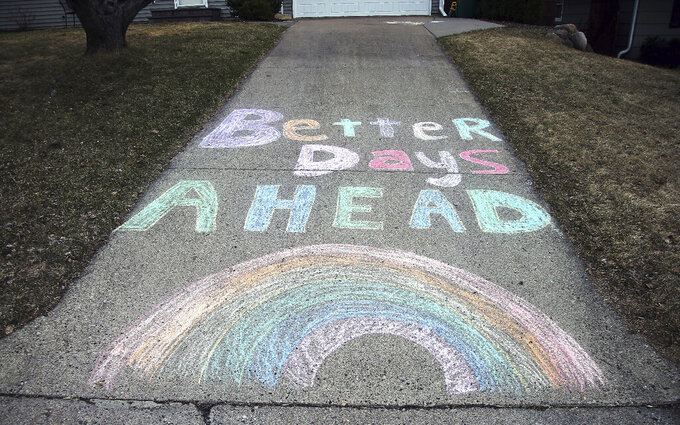 A chalk message and rainbow adorn a driveway with a positive message in the fight against the coronavirus at a Bloomington, Minn. home Wednesday, April 1, 2020, The new coronavirus causes mild or moderate symptoms for most people, but for some, especially older adults and people with existing health problems, it can cause more severe illness or death. (AP Photo/Jim Mone)

The Latest on the coronavirus outbreak in Minnesota (all times local):

The Guthrie Theater in Minneapolis has canceled the rest of its season because of the coronavirus pandemic.

The Guthrie previously had canceled performances through April 5. But the theater announced Thursday that “ever-evolving health and safety information” prompted the decision to cancel programming through the summer.

For now, the Gurthrie plans to open its 2020-21 season with a production of Noel Coward's “Private Lives” in mid-September.

Artistic director Joseph Haj says the Guthrie determined "this is the only viable and responsible path forward.”

Ticket holders have the option to donate their tickets, place the value of their tickets on account for future use or request a refund. The Guthrie building will remain closed to the public until further notice.

One more Minnesota resident has died from COVID-19, raising the state’s total to 18, the Minnesota Department of Health reported Thursday,.

The state’s confirmed cases continued to rise, with 53 new cases for a total of 742 since the outbreak began. But 373 of those patients have recovered. Officials caution that those numbers are low because not everyone qualifies for testing.

Seventy-five patients were hospitalized Thursday, a jump of 21 since Wednesday, with 38 in intensive care, up 11 from Wednesday.

The largest share of cases in Minnesota is attributed to community spread at 31%, followed by exposure to a known case at 22%, and people who’ve recently traveled to another state with no known exposure at 20%. Fifteen percent were linked to international travel and 3% to cruise ships. The likely source is unknown in 10% of cases.

For most people, the virus causes mild or moderate symptoms, such as fever and cough that clear up in two to three weeks. For some, especially older adults and people with existing health problems, it can cause more severe illness, including pneumonia, and death.