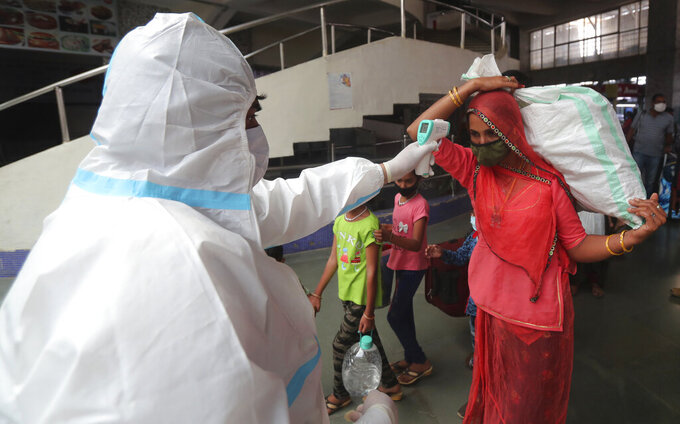 A health worker checks the temperature of a passenger at Bandra train station in Mumbai, India, Wednesday, Feb. 17, 2021. Health officials have detected a spike in COVID-19 cases in several pockets of Maharashtra state, including in Mumbai, the country's financial capital. (AP Photo/Rafiq Maqbool)

The relaxation that took effect Thursday is a huge relief for the city’s service sector, which has been hammered by periodical closure orders and strict limits on dining out.

Under the new rules, indoor dining is permitted until 10 p.m. with no more than four people allowed at a table. Other outlets allowed to reopen include video arcades, fitness centers, beauty and massage parlors, amusement centers, karaoke bars and sports facilities. Staff at such facilities must undergo a coronavirus test every 14 days.

Public gatherings of more than two people remain prohibited and mask-wearing in public is mandatory until March 3.

— COVID-19 bill would scale up ability to spot virus mutations.

— Latinos in U.S. face fear and other barriers to getting COVID-19 vaccines

— Pandemic stresses take a huge toll on college students, who struggle to pay for food and housing as jobs and internships dry up

The 621 new cases reported Thursday brought the national caseload to 85,567, including 1,544 deaths. The country reported 621 new cases Wednesday, which was the highest daily jump in more than a month.

More than two-thirds of the new cases were in Seoul area, home to half of South Korea’s 51 million people. A plastic factory near the capital has emerged as a major cluster of infections, linked to more than 110 cases so far since a Cambodian worker first tested positive Saturday.

DENVER — The Denver Board of Ethics has unanimously dismissed an ethics complaint that was filed after the city’s mayor flew to Texas for Thanksgiving despite urging Denver’s residents to avoid holiday travel because of the coronavirus pandemic.

Michaels says the mayor disappointed and angered the city’s residents. But he says the board found that the mayor had not specifically violated the city’s code of ethics.

Michaels adds: “This board certainly does not condone that travel.”

It’s the result of an ongoing investigation into counterfeits sold in at least five states to hospitals, medical facilities and government agencies.

Officials say the most recent seizures occurred Wednesday when Homeland Security agents intercepted hundreds of thousands of counterfeit 3M masks in an East Coast warehouse that were set to be distributed.

Investigators also notified about 6,000 potential victims in at least 12 states including hospitals, medical facilities and others who may have unknowingly purchased knockoffs, urging them to stop using the medical-grade masks.

Officials encouraged medical workers and companies to go to 3Ms website for tips on how to spot fakes.

RALEIGH, N.C. — North Carolina is shifting its vaccine distribution guidance to dissuade people from traveling long distances to receive a COVID-19 shot in the state.

Under updated guidance from the Centers for Disease Control and Prevention clarifying travel policies, North Carolina has enacted stricter vaccination policies to improve North Carolinians’ access to the vaccine.

The move aims to give greater preference to in-state residents who have struggled to book appointments and come in for shots due to the high demand, but loopholes still allow for people to travel into the state without having to provide ID, proof of residency or proof of employment.

People living out of state could also explain to vaccine administrators that they are eligible for shots because they work or spend a significant time in North Carolina or continue to receive ongoing health care in the state.

The lawsuit from New York Attorney General Letitia James comes just days after Amazon preemptively sued to block it from happening. In its own lawsuit filed Friday, Amazon said that unannounced inspections by the New York City sheriff’s office found its New York warehouse went above and beyond safety requirements.

On Wednesday, Amazon spokesperson Kelly Nantel added that the attorney general’s lawsuit doesn’t present an accurate picture of Amazon’s response to the virus.

In the suit filed late Tuesday, New York claims Amazon showed a “flagrant disregard for health and safety requirements” and retaliated against employees who raised alarms.

The lawsuit involves two Amazon facilities in New York City that employ more than 5,000 workers. It alleges that Amazon failed to disinfect those facilities when infected workers had been present; didn’t contact workers when they were exposed to the virus; and made employees work so much that they didn’t have time to disinfect their workstations or stay socially distant.

TORONTO — Canada’s largest city is asking the province of Ontario to extend a lockdown order for at least two more weeks instead of having it expired as planned on Monday.

Dr. Eileen de Villa, Toronto’s Medical Officer of Health, said she has never been as worried about the future as she is now because of coronavirus variants.

Canada is poised to receive millions of vaccine does this spring.

HARRISBURG, Pa. — Pennsylvania is facing a temporary shortage of booster shots of the Moderna vaccine because providers inadvertently used them as first doses, setting back the state’s already stumbling vaccine rollout.

Acting state health secretary Alison Beam said between 30,000 and 60,000 people who need the booster shot will have to wait one to two more weeks. Another 30,000 to 55,000 of the initial dose of the Moderna vaccine will also have to delayed.

The second-dose shortage does not affect the Pfizer vaccine.

Second doses of the two-shot Pfizer and Moderna vaccines are typically administered 21 and 28 days apart, respectively, but the U.S. Centers for Disease Control and Prevention recently updated its guidance to allow the time between shots to be delayed up to six weeks.

MADRID -- Spain will place those arriving from Brazil and South Africa in quarantine for 10 days in a new bid to stem the propagation of coronavirus variants from those countries.

Health Minister Carolina Darias said Wednesday Spain has registered 613 cases of the British variant, six of the South African type and two of that from Brazil.

Spain has already restricted arrivals from all three countries to Spanish nationals and foreign residents in Spain. It also insists on negative PCR tests from within the previous 72 hours as well as anti-body tests on arrival.

The ministry Wednesday said Spain’s COVID-19 pandemic figures continued their positive downward trend, with the 14-day incidence rate falling to 349 per 100,000 inhabitants, down from 385 a day earlier and far below the near 900-case high at the end of January.

WASHINGTON — The Biden administration says it will spend more than $1.4 billion to boost testing supplies and coordination as U.S. officials aim to return more students to the classroom.

The White House says it will spend $815 million to increase U.S. manufacturing of testing supplies that have been subject to frequent shortages for months, including materials used in laboratories and for rapid point-of-care tests.

The U.S. failure to provide fast, widespread testing is one of the most enduring stumbles in the federal government’s response to COVID-19. As a candidate, Biden said his administration would deliver free, comprehensive testing at a national scale. He has asked Congress to provide $50 billion for testing in the stimulus bill before lawmakers.

ALBANY, N.Y. — New York is set to let amusement parks open in early April and overnight camps open this summer as long as they submit reopening plans to the state.

Gov. Andrew Cuomo said Wednesday that arcades and other indoor family entertainment centers can open with 25% capacity starting March 26. Outdoor amusement parks can open with a third of their normal capacity by April 9, while day and overnight camps can start planning for reopening this summer.

New York is seeing a drop in infections statewide, though at a slower pace than the nation. But the governor said the overall statewide drops are enough to allow New York to bring back recreational industries.

WASHINGTON — The U.S. is vaccinating on average 1.7 million Americans per day for the coronavirus, up from under 1 million a month ago.

New figures from the White House show the steady increase in the pace of vaccinations over President Joe Biden’s first month in office.

Much of the increase, according to data from the Centers for Disease Control and Prevention, comes from people receiving their second dose of the approved vaccines from Moderna and Pfizer.

The pace of first dose vaccinations has been largely steady over the past several weeks, hovering around an average of 900,000 shots per day.

Biden is on track to blow past his goal of 100 million injections in his first 100 days in office — though the pace must pick up even further to meet his plans to vaccinate nearly all adults by the end of the summer.

WASHINGTON — The White House says drugmaker Johnson & Johnson has just a “few million” doses of its COVID-19 vaccine in inventory ready to be distributed, should the Food and Drug Administration grant it emergency approval.

Coronavirus coordinator Jeff Zients is looking to lower expectations for the impact of approval for the promising, one-dose vaccine, which could happen in the next several weeks. The company has contracted to provide 100 million doses — enough for 100 million Americans — by the end of June.

Zients says, “We’re going to be started only with a few million of inventory.” He adds the Biden administration is working to expedite the vaccine deliveries as much as possible.

RIO DE JANEIRO -- Rio de Janeiro halted new vaccinations against COVID-19 for a week starting Wednesday due to a shortage of doses, one of a growing number of Brazilian cities that have run low on supplies and are demanding help from Brazil’s federal government.

City officials said they will continue to deliver second doses to those who have already been injected once, but have paused new shots for the elderly.

Officials say vaccines for new recipients ran out partly because they had pushed forward their schedule by one week after receiving a fresh lot of doses. Rio Mayor Eduardo Paes said on Monday that additional shots won’t be delivered before next week.

“We are ready and we have already vaccinated 244,852 people,” he said on his official Twitter profile. “We just need the vaccine to arrive.”

ATLANTA — Snowy and icy weather across much of the nation has “significantly” delayed shipments of COVID-19 vaccine to Georgia, state health officials said Wednesday.

Both Pfizer and Moderna vaccines that normally would have arrived the first part of this week were held back by the manufacturers due to the winter weather, The Georgia Department of Public Health said in a statement.

As a result, health departments and other vaccine providers have been forced to reschedule appointments, the agency said. When those shots can be administered will depend on when vaccine shipments resume and when they arrive in Georgia, health officials said.

Delays are expected to continue through the week, officials said.