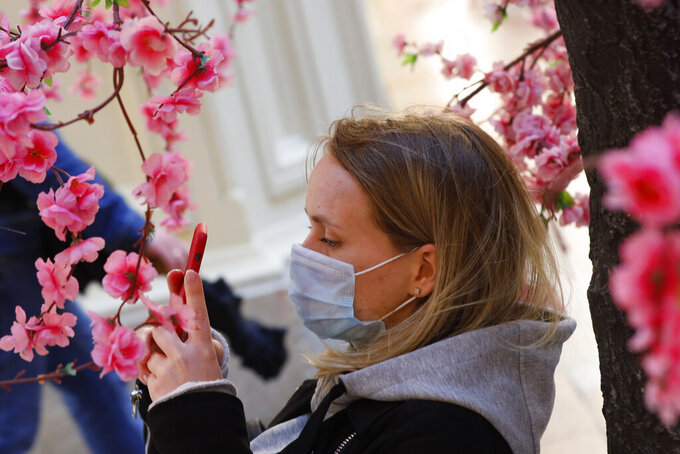 A woman wearing a face mask to help curb the spread of the coronavirus takes photo of fake flowers at the GUM, the State Department store, near Red Square in Moscow, Russia, Thursday, June 10, 2021. The Russian authorities reported a spike in coronavirus infections on Thursday, with new confirmed cases exceeding 11,000 for the first time since March. (AP Photo/Alexander Zemlianichenko)

CHICAGO — Illinois is lifting all capacity limits on bars, restaurants, businesses and other venues Friday, nearly 15 months after the first stay-at-home order during the coronavirus pandemic.

Businesses still can have their own rules for capacity, masks and social distancing. Masks are still required on public transportation and in airports, schools and hospitals.

Gov. J.B. Pritzker said Thursday that “as we take this next step forward, let’s do so with a renewed commitment to empathy, to community, and to making each day together count.”

State health officials say more than 68% of Illinois residents who are 18 or older have received at least one dose of vaccine against the coronavirus, and 51% of adults are fully vaccinated.

— Biden lays out vaccination play, asks G-7 leaders to do the same

WASHINGTON — U.S. health officials are investigating what appear to be higher than expected reports of heart inflammation in male teens and young adults after they get a second dose of the Pfizer and Moderna vaccines.

It’s not clear if the inflammation is caused by the shots and the reports still are rare, the CDC says. It urges everyone 12 and older to get vaccinated.

A CDC official said Thursday that as of May 31, the agency had 275 preliminary reports of such inflammation in 16- to 24-year-olds,.That’s out of more than 12 million second-dose injections of the vaccines.

The official says the cases seem to occur more often in men and in younger people, and most already have fully recovered.

DENVER—Colorado Gov. Jared Polis has announced the first five winners of $50,000 scholarships in a program designed to encourage students to get vaccinated against COVID-19.

The state is offering 25 student scholarships for students ages 12 to 17 who have received at least one vaccine dose.

Winners selected in random drawings can use the scholarships at the post-secondary educational institutions of their choice. That includes colleges and technical, occupational and credential programs inside and outside Colorado.

Five winners will be chosen each week through July 9. Colorado also is offering a $1 million lottery program for five adults who get at least one shot.

ATLANTA — Georgians receiving unemployment benefits will once again be required to look for work and will be able to earn less before unemployment payments drop beginning June 27.

Georgia announced last month that beginning June 27 it would cut off federal programs that provide a $300-a-week pandemic boost to people on the jobless rolls as well as programs that pay federal money to people not usually eligible for state unemployment.

Butler earlier signaled he would reinstate work-search requirements, a move underway in more than three-quarters of states.

Sununu first declared a state of emergency over the coronavirus on March 13, 2020. He renewed it every three weeks until two weeks ago, when he indicated he would let it expire at midnight June 11.

In the governor’s words: “We’ve kind of checked all the boxes and we feel very confident that moving away from it tomorrow still keeps us in a very strong position.”

Sununu thanked public health officials as well as citizens for volunteering during the pandemic, balancing safety with maintaining a strong economy and getting vaccinated.

ST. IVES, England — President Joe Biden is calling on global leaders to follow his lead in sharing coronavirus vaccines with struggling nations around the world.

He promised the U.S. would donate 500 million doses to help speed the pandemic’s end and bolster the strategic position of the world’s wealthiest democracies.

In Biden's words: “In times of trouble, Americans reach out to offer help."

Speaking before the meeting of the Group of Seven, Biden announced the U.S. commitment to vaccine sharing, which comes on top of 80 million doses he has already pledged by the end of the month.

He says the other G-7 nations will join the U.S. in outlining their vaccine donation commitments Friday.

WASHINGTON — Johnson & Johnson says U.S. health officials have extended the expiration date for millions of doses of its coronavirus vaccine by an extra six weeks.

The drug maker says the FDA approved a longer shelf-life for the one-dose shots. State officials recently warned that many unused doses would reach their original three-month expiration by the end of June.

The extension comes as the rate of new U.S. vaccinations continues to slip. The U.S. averaged about 800,000 injections per day last week. That’s down from a high of nearly 2 million per day two months ago.

President Joe Biden’s goal is 70% of American adults partially vaccinated by July 4. The CDC says about 64% of Americans 18 and above have received at least one dose.

ANKARA, Turkey — Turkey is expanding its vaccination drive to include restaurant workers, barbers and hairdressers.

Health Minister Fahrettin Koca announced on Twitter that food production and distribution sector workers as well as employees of cafes and restaurants will be included in the inoculation program starting Friday.

Turkey is currently vaccinating those 45 and older as well as people in the health sector, police, teachers, journalists and tourism sector workers. Earlier this week, musicians, other performers and academics were added to the list of priority occupations.

The country of 84 million has administered some 32 million shots since starting its vaccination campaign on Jan. 14. Some 13.5 million have received two doses.

CHICAGO — United Airlines says more than 830,000 people have entered the contest it started last month to encourage people to get vaccinated against COVID-19.

People who upload pictures of their vaccination card to the airline have a slim shot at free flights.

The airline says the largest bloc of contest entrants are people in their 50s, and about one in eight are between 18 and 28.

Their second such reversal in a week gives them time to consider a rule that more closely aligns with Gov. Gavin Newsom’s promise that the state will fully reopen from the pandemic on Tuesday.

But some business leaders on Wednesday kept up their pressure on Newsom to override the board. The California Occupational Safety and Health Standards Board’s rule would have allowed workers to forego masks only if every employee in a room is fully vaccinated against the coronavirus.

That contrasts with the state’s broader plan to do away with nearly all masking requirements for vaccinated people.

NEW DELHI — India is asking China to facilitate essential two-way travel between the countries and grant visas to Indian nationals working and studying there.

The Chinese Embassy in India in March issued a notification about facilitating visas for those who have taken Chinese-made vaccines. The Indian ministry says several Indian nationals have applied for Chinese visas after getting vaccinated in that manner, but they are yet to be issued visas.

LONDON -- British Health Secretary Matt Hancock is defended his handling of the coronavirus pandemic following a series of allegations from a former top adviser to Prime Minister Boris Johnson.

Facing questioning from lawmakers, Hancock says he has “no idea” why Dominic Cummings has a dispute with him.

Two weeks ago, Cummings told the same lawmakers investigating the coronavirus outbreak in the U.K. that Hancock “should have been fired” for a series of alleged lies and litany of errors during the pandemic.

After a devastating winter surge of infections, deaths have recently fallen sharply after months of strict lockdown and the rapid rollout of vaccines. However, the U.K. reported 7,540 new infections Wednesday, the biggest daily increase since Feb. 26.

The U.K. has recorded nearly 128,000 confirmed coronavirus-related deaths, more than any other nation in Europe.

BERLIN — Germany has started rolling out a digital vaccination pass that can be used across Europe as the continent gears up for the key summer travel season.

The country’s health minister says starting this week vaccination centers, doctors practices and pharmacies will give out digital passes to fully vaccinated people.

The CovPass will allow users to download a proof of their coronavirus vaccination on an app to their smart phones, which will allow them to easily enter restaurants, museums or other venues that require proof of vaccination.

Health Minister Jens Spahn says the vaccination passport should be available to everyone in Germany who is fully vaccinated by the end of this month.

Two hundred million doses — enough to fully protect 100 million people — will be provided this year, with the balance donated in the first half of 2022, according to the White House.

The U.S. will work with the U.N.-backed COVAX alliance to deliver the shots. Some have noted that since the Pfizer vaccines require extremely cold storage, they present an extra logistical challenge for countries with struggling health systems and poor infrastructure.

U.S. President Joe Biden is expected to talk about the plan later Thursday in a speech on the eve of the Group of Seven summit in Britain.

The World Health Organization’s Europe director warned that the highly transmissible COVID-19 variant first identified in India is “poised to take hold in the region,” as many countries prepare to ease restrictions and allow more social gatherings and travel across borders.

During a press briefing on Thursday, WHO’s Dr. Hans Kluge said the variant also known as the delta variant, has shown signs of being able to evade some vaccines and warned that many vulnerable populations, particularly those over age 60, remain unprotected.

“We have been here before,” warned Kluge, WHO’s European regional director. “Over the course of last summer, cases gradually rose in younger age groups and then moved into older age groups, contributing to a devastating resurgence,” he said. Kluge said that spike in COVID-19 ultimately led to more lockdowns and deaths in the fall and winter of 2020. “Let’s not make that mistake again.”

Kluge didn’t say people shouldn’t travel, but urged any travelers to do so wisely. He also called for vaccination and other public health measures to be stepped up across the continent, saying even immunization coverage “is far from sufficient to protect the region.”