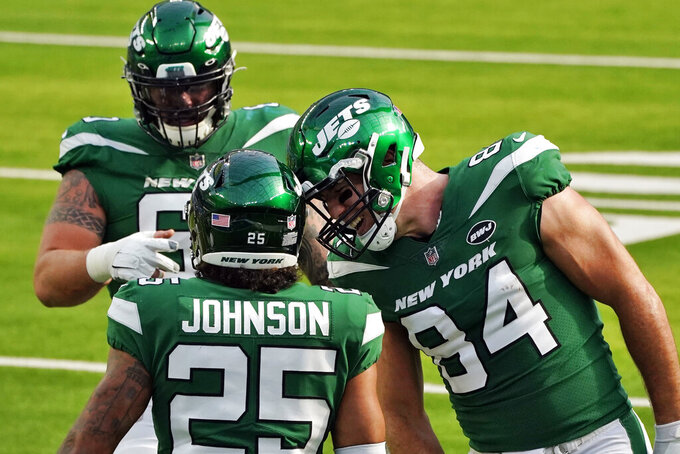 New York Jets running back Ty Johnson (25) celebrates his touchdown catch with Ryan Griffin (84) during the first half of an NFL football game against the Los Angeles Rams Sunday, Dec. 20, 2020, in Inglewood, Calif. (AP Photo/Ashley Landis)

The New York Jets have placed tight end Ryan Griffin on the reserve/COVID-19 list, likely keeping him out of the 1-13 team’s home game against Cleveland on Sunday.

Griffin is the second Jets player in as many weeks to be placed on the list. Defensive lineman Folorunso Fatukasi missed New York’s win over the Los Angeles Rams last weekend when he was deemed a close contact of someone outside the organization who tested positive.

Fatukasi was activated from the list Tuesday and will be available to play against the Browns.

Griffin, in his second season with the Jets, has nine catches for 86 yards. The 30-year-old tight end had 34 receptions for 320 yards and a career-high five touchdowns last season, and he received a three-year, $10.8 million extension with $4 million guaranteed.

The Big West Conference is moving the men’s and women’s basketball tournaments from the Honda Center in Anaheim, California, to the Mandalay Bay Events Center in Las Vegas.

The tournaments are set for March 9-13. The conference said that because of the cancellation of conference games, all 10 schools will compete.

The Big West said it will continue to monitor the COVID-19 pandemic and the possibility of allowing limited crowds at the events.

UCLA’s men’s basketball game at No. 25 Oregon has been postponed because of COVID-19 testing and contact tracing protocols involving a game official.

Initially, Wednesday's scheduled noon tipoff was pushed back by two hours, but before that window expired, word came that the game was off.

It’s the third game for UCLA that has been postponed because of the coronavirus. The Bruins’ next game is Dec. 31 at home against Utah. But that may be in doubt because the Utes are dealing with a confirmed case of COVID-19 in their program.

The Ducks’ next game is set for Dec. 31 at home against California.

The Pac-12 will work with both Oregon and UCLA to try to find a mutually agreeable date to reschedule.

Syracuse’s men’s basketball game against No. 17 North Carolina that was scheduled for Jan. 2 has been postponed as the Orange remain on pause.

Syracuse stopped all basketball activities after members of Buffalo’s program tested positive for COVID-19 following the Orange’s overtime win Saturday against the Bulls.

New York state has a mandatory 14-day quarantine period for those who are considered close contacts with someone who tested positive for the coronavirus.

Detroit Lions interim coach Darrell Bevell, defensive coordinator Cory Undlin and some other members of the coaching staff won't be on the field when the team resumes practice on Wednesday.

Bevell says he has not tested positive for COVID-19, but he is among the coaches affected by contact tracing.

The Lions closed their training facility on Tuesday because two people within the organization tested positive for the coronavirus. The team says no one else has tested positive as of Wednesday morning.

Detroit (5-9) is scheduled to host Tampa Bay (5-9) on Saturday and the banged-up team might be without its interim coach, defensive coordinator and other assistants. The Buccaneers can clinch a spot in the playoffs with a win.

— This item has been corrected to show that Bevell spent his 28th, not 20th, wedding anniversary alone.

The NHL has postponed the outdoor Stadium Series game in North Carolina that was expected to be played in February.

The announcement was made Wednesday as the league firms up its full schedule for a season that will be shortened to 56 regular-season games for each team because of the pandemic. The Carolina Hurricanes had been scheduled to host the annual Stadium Series game on Feb. 20 at Carter-Finley Stadium in Raleigh.

The NHL says the game will be played in North Carolina at another time.

The Detroit Lions are practicing outdoors on Wednesday, a day after closing their training facility because two employees tested positive for COVID-19.

The Lions say no one else has tested positive. However, several coaches will stay away from the team until further notice due to contact tracing. The team met virtually Wednesday morning.

Detroit is scheduled to host Tampa Bay on Saturday. The Buccaneers can clinch a spot in the playoffs with a win at Ford Field.

Georgia Tech’s men’s basketball game at UAB scheduled for Wednesday night has been canceled because of positive COVID-19 tests and subsequent contact tracing within the Blazers’ program.

The game to be held at Bartow Arena in Birmingham, Alabama, won't be rescheduled.