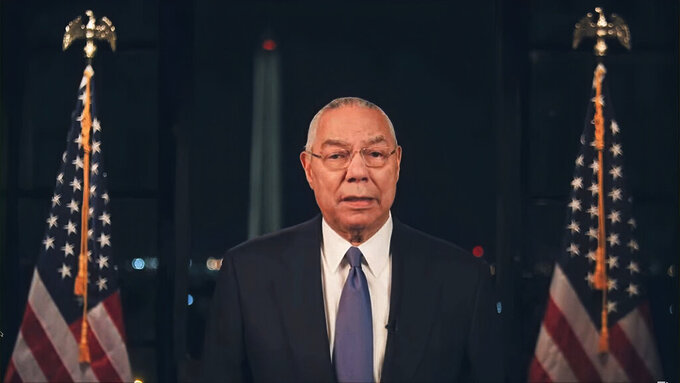 Jill Biden offered a deeply personal and hopeful endorsement of her husband as a man who can lead the nation through adversity during the Democratic National Convention.

On Tuesday night, she pledged to the nation that if her husband is elected president, America’s classrooms “will ring out with laughter and possibility once again.”

Speaking from the Wilmington, Delaware, high school classroom where she taught English years ago, Jill Biden described “the anxiety that echoes down empty hallways” and the uncertainty that’s come as schools grapple with whether to resume in-person teaching as the coronavirus pandemic rages on.

“The burdens we carry are heavy, and we need someone with strong shoulders,” Mrs. Biden said. “If we entrust this nation to Joe, he will do for your family what he did for ours: Bring us together and make us whole, carry us forward in our time of need, keep the promise of America, for all of us.”

Mrs. Biden drew parallels with her husband’s experience leading his family through personal adversity and what she described as his ability to lead the nation through its current crises.

— Some key takeaways from Day 2 at Democratic convention

— At DNC, Jill Biden gets personal about family's struggles

Former Secretary of State Colin Powell is endorsing Joe Biden, saying with him in the White House, “We will never doubt that he will stand with our friends and stand up to our adversaries — never the other way around.”

In taped remarks during the Democratic National Convention on Tuesday night, Powell sought to draw an implicit contrast between Biden and President Donald Trump, without naming Trump.

Powell also lamented that “today we have a country divided, and we have a president doing everything in his power to make us that way, to keep us that way.”

Powell served as secretary of state under Republican President George W. Bush from 2001 until 2005, and served as chairman of the Joint Chiefs of Staff under both Bush and Democratic President Bill Clinton.

Kerry, the 2004 Democratic presidential nominee, said Tuesday at the Democratic National Convention: “This moment is a fight for the security of America and the world.”

He said the Obama administration left U.S. foreign policy in good order when he left office. They stopped the Ebola virus before it could become a pandemic, defeated the Islamic State group and entered into an accord to reduce emissions that cause global warming.

Kerry accused Trump of failing to stand up to Russia and doing nothing to confront Russian President Vladimir Putin after some intelligence officials concluded the country placed bounties on U.S. soldiers in Afghanistan.

He also referenced Trump being escorted to a White House bunker during recent protests.

“Our troops can’t get out of harm’s way by hiding in the White House bunker,” Kerry said.

Prominent Republicans who oppose President Donald Trump have been awarded prominent speaking roles at the Democratic convention. But some progressives, who make up a large share of the party’s base, say they are being unfairly overlooked.

Sen. Bernie Sanders was given a prominent slot on Monday. And Sen. Elizabeth Warren will appear later in the week.

But progressives have been angered that the DNC event has slighted others, including Rep. Alexandria Ocasio-Cortez, who spoke for roughly 90 seconds on Tuesday.

Julián Castro, the only Latino in the historically diverse primary field, wasn’t given a speaking slot at the convention after some tense moments with Biden during the campaign. Instead, a brief clip of his keynote at the 2012 convention appeared as part of a video presentation.

The Democratic Party has formally made Joe Biden its presidential nominee, a position he has sought for more than 30 years and through three White House bids.

Delegates from each state took a roll call vote during the second night of the virtual Democratic National Convention on Tuesday, awarding Biden the position. Usually, each state calls out the number of delegates that different candidates won there during the primary in a dramatic fashion in a sports arena or large hall -- but the count was all done online this time.

Biden actually clinched the nomination in early June. His other challengers in the once-crowded Democratic presidential primary had left the race, and the votes of seven states and the District of Columbia gave him the 1,991 delegates to the convention needed to lock it up.

A former senator from Delaware and vice president, Biden first ran for president in 1988 and tried again in 2008 before launching his 2020 campaign last year.

President Donald Trump faced only token opposition in his party’s primary and will formally be renominated as his party’s candidate during the virtual Republican National Convention next week.

A cornfield in Iowa, a cattle range in Montana, the California coastline.

Those were the scenes behind Democratic delegates as they formally cast their votes in the presidential nominating process. Most delegates went to Joe Biden, but some went to Vermont Sen. Bernie Sanders, the runner-up.

Typically the nominating process is held in a convention hall with all the delegates gathered together.

But the videos submitted to the virtual convention provided more picturesque scenes from around the nation. In Michigan, the delegates stood in front of cars representing the state’s auto industry. In Louisiana, they spoke from an art studio with colorful murals on the wall. In Nebraska, the woman nominating Biden wore a face mask as she talked about essential workers battling the pandemic.

Two politicians from Joe Biden’s home state of Delaware and a security guard who met Biden in an elevator have formally nominated him as the Democratic presidential nominee.

Jacquelyn Brittany met Biden when he went to The New York Times for an interview last year, and a video of their interaction went viral. She says he was unlike many of the powerful people with whom she shares the elevator.

She says, “I could tell he really saw me, that he actually cared.”

Rep. Lisa Blunt Rochester, also of Delaware, says future schoolchildren will learn about the pain and grief of this time in America but also about how a “President Biden” restored decency and integrity to American democracy.

Rep. Alexandria Ocasio-Cortez has described the progressive movement started by Bernie Sanders as “a mass people’s movement” that’s working to move the country toward guaranteed health care and higher education.

Ocasio-Cortez is widely seen as the successor of Sanders’ progressive flank of the party.

She says Sanders ran a historic grassroots campaign that realized that turns away from an American history checkered by violence, xenophobia, racial injustice and more and “that realizes the unsustainable brutality that rewards explosive inequalities of wealth for the few at the expense of long-term stability for the many.”

Bill Clinton has delivered a stinging attack on President Donald Trump, saying the nation knows what he’d do with four more years in the White House: “Blame, bully and belittle.”

The former president addressed the second night of the virtual Democratic National Convention on Tuesday and said Trump “defines the job as spending hours a day watching TV and zapping people on social media.”

Clinton said, “Denying, distracting, and demeaning works great if you’re trying to entertain and inflame. But in a real crisis, it collapses like a house of cards.”

He also praised Democratic candidate Joe Biden but spent far more time on the offensive against Trump, who defeated his wife, Hillary, to clinch the presidency in 2016.

Bill Clinton played a major role in conventions for four decades but was limited to five minutes on Tuesday.

But even abbreviated, his appearance is tricky for Democrats. In the #MeToo era, as the party is focused on overt appeals to female voters, putting Clinton on stage is problematic for Democrats, given the numerous accusations of sexual misconduct against him.

Caroline Kennedy is portraying Joe Biden as a public servant in the spirit of her father, who once challenged Americans to look at what they can do for their country.

The daughter of President John F. Kennedy spoke Tuesday at the all-virtual Democratic National Convention about helping Barack Obama choose Biden as a running mate while on his vetting team and then seeing him in action as vice president.

Kennedy served as the U.S. ambassador to Japan during the Obama administration and said she saw Biden as a leader who was tough but fair and commanded the trust and respect of other nations.

She appeared in a video speaking alongside her son Jack Schlossberg as they attempted to bridge a generational span across the party.

Senate Democratic leader Chuck Schumer made a pitch at the Democratic National Convention not just for Joe Biden, but for flipping control of the Senate to Democrats.

Schumer said Tuesday: “If we are going to win this battle for the soul of our nation, Joe can’t do it alone. Democrats must take back the Senate.”

The New York Democrat outlined a potential 2021 agenda on making health care “affordable for all” and tackling income inequality, climate change and other issues, including the COVID-19 crisis.

With the Statue of Liberty as a backdrop, he said President Donald Trump has “demeaned” everything it stands for.

“America, Donald Trump has quit on you,” he said.

“We need a president with dignity, integrity, and the experience to lead us out of this crisis, a man with a steady hand and a big heart who will never — ever — quit on America,” he said. “That man is my friend Joe Biden. He will be a great president.”

Yates spoke Tuesday on the second night of the Democratic National Convention.

She said she never expected to be speaking at a convention but the future of the country was at stake. She said Trump’s Democratic opponent, Joe Biden, represented the best of the country and said America needed a president who respected its laws and “would restore the soul of America.”

A diverse group of Democratic leaders is delivering the keynote address on the second night of the party’s convention, appearing in a montage of spliced together clips to deliver a stinging critique of President Donald Trump’s leadership.

The keynote address is a moment that has often been seized by political up-and-comers to deliver a soaring message. That includes Barack Obama, who rocketed to stardom in 2004 when John Kerry was the nominee.

But because the pandemic led to the cancellation of an in-person convention, Democrats opted to showcase a diverse group of local leaders in one video message on Tuesday.

“It didn’t have to be this bad. In the early days of the virus, Donald Trump didn’t listen to the experts,” said Nikki Fried, Florida’s agriculture commissioner.

Long Beach, California, Mayor Robert Garcia added: “We are facing the biggest economic and health crisis in generations because our president didn’t -- and still doesn’t -- have a plan.”

The speakers contrasted Trump’s leadership with that of Biden and their own, presenting the Democratic ticket as a safe choice for those who are worried.