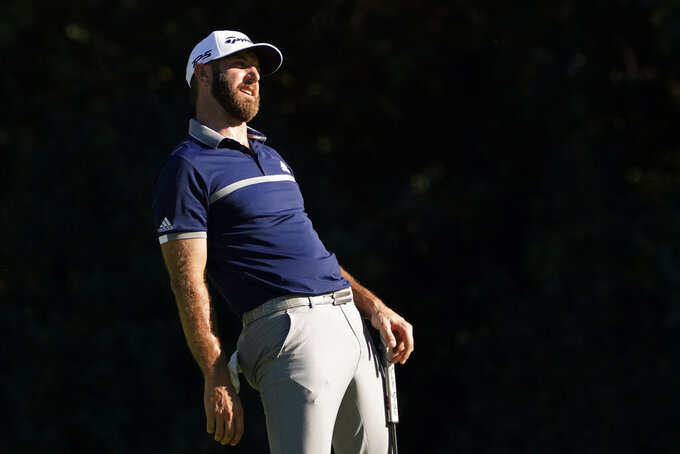 Dustin Johnson reacts to a missed putt on the fifth hole during the second round of the Masters golf tournament Friday, Nov. 13, 2020, in Augusta, Ga. (AP Photo/Charlie Riedel)

Play has been suspended in the second round of the Masters, with 48 players yet to finish.

Dustin Johnson shot a 2-under 70 for a share of the lead with Justin Thomas, Abraham Ancer and Cameron Smith at 9 under.

Patrick Cantlay and Sungjae Im were a stroke back. So was Jon Rahm, who only made it through 12 holes. Defending champion Tiger Woods was even on the day and 4 under for the tournament when darkness stopped play after 10 holes.

Bernhard Langer is positioned to become the oldest player in Masters history to make the cut.

The 63-year-old Langer finished up the opening round with a 4-under 68 in the morning — his best round at Augusta National since 2001. He held on to shoot 73 in the afternoon, putting him at 3-under 141 midway through the tournament.

While the second round won’t be completed until Saturday morning, Langer is assured of getting through. He will break the record set by Tommy Aaron, who was 33 days younger when he made the cut in 2000.

Of course, this is nothing new for Langer, who is still a leading player on the PGA Tour Champions and keeps himself in top physical condition. This will be the third year in a row he has made the cut at the Masters. In 2014, Langer tied for eighth at the age of 56.

The Masters leaderboard is awfully crowded at the top.

Dustin Johnson, Justin Thomas, Cameron Smith and Abraham Ancer all have a share of the lead after finishing the second round at 9-under 135.

None of the four have won a green jacket. In fact, Ancer is playing in the Masters for the first time, looking to become the first rookie since Fuzzy Zoeller in 1979 to claim the championship on his first try.

Ancer posted a 5-under 67 in the second round. Smith shot 68, Thomas 69 and Johnson 70 as the course continued to provide inviting conditions for going low on a sunny, unseasonably warm fall day.

Patrick Cantlay is one shot off the lead after a 66 gave him a two-day total of 136.

No rookie jitters for Abraham Ancer.

Playing in his first Masters, Ancer has a share of the lead after a dazzling 5-under 67 left him at 9-under 135 midway through the tournament.

The 29-year-old from Mexico has yet to win on the PGA Tour, but he's moved up in the world rankings with a pair of runner-up finishes in 2020.

Experience is always a key factor at Augusta National, but the conditions are much more inviting because of rain this week that saturated an already-soft course. The tournament is being played in the fall rather than the spring because of the coronavirus pandemic.

Ancer took advantage, bouncing back from a bogey on his first hole to make six birdies the rest of the way. That came on the heels of a 68 in the opening round, when he closed with four birdies on his final six holes.

The odds are against Ancer, however. Outside of the first two Masters in the 1930s, the only time a player won in his first appearance was Fuzzy Zoeller in 1979.

The 33-year-old Englishman turned in his best round at the Masters since winning in 2016, shooting a 6-under 66 in the second round.

Willett rolled in a birdie putt at No. 9, his final hole, and headed to the clubhouse just two shots off the lead — a far cry from his last three Masters appearances.

Since winning the green jacket in a tournament best known for Jordan Spieth's collapse, Willett has missed the cut three straight years, failing to break par in any round.

But this year, he opened with a 71 and followed up with the best score of his Masters career. Until Friday, his lowest round was a 67 that carried him to victory in the final round four years ago.

There's a three-way tie atop the leaderboard in the second round of the Masters.

Dustin Johnson came back to the pack with bogeys on Nos. 14 and 15. That left him at 8 under for the tournament through eight holes, tied with Justin Thomas (through nine) and Sungjae Im (through six).

Thomas started out slowly but then birdied four consecutive holes before making the turn at No. 18. Im, a 22-year-old Masters rookie from South Korea, has four birdies and a bogey on the day.

Overnight leader Paul Casey (7 under) has yet to tee off. Four players are tied for fifth at minus-6, including amateur John Augenstein.

Dustin Johnson is pulling away from the field in the second round of the Masters.

The 2019 runner-up birdied three of the first four holes in the second round on Friday. He was at 10 under for the tournament before a bogey on the 14th hole dropped him to minus-9, two strokes ahead of Sungjae Im and Paul Casey.

Casey had yet to tee off on Friday.

Masters rookie Erik van Rooyen has withdrawn from the tournament with an unspecified injury.

Organizers made the announcement at the end of his first round. The 30-year-old South African shot 76, finishing up with two double bogeys and a bogey in his last five holes.

Van Rooyen earned his invitation to the Masters for being in the top 50 in the world at the end of last year. He finished tied for eighth in the 2019 PGA Championship — his best showing in a major.

Two-time champion Bernhard Langer is making a bid to be the oldest player ever to make the cut at the Masters.

The 63-year-old German shot 68 in the rain-delayed first round, finishing up on Friday morning. He was back on the course for Round 2 almost immediately. He opened with a bogey to fall to 3 under and a tie for 17th place.

Tommy Aaron was 63 and a couple of months when he made the cut in 2000. Langer would be about a month older.

The first round at the Masters ended with Paul Casey, Dustin Johnson and Dylan Frittelli all tied at 7 under after shooting 65s.

Casey was the overnight leader, but Johnson and Frittelli had to return to the course Friday morning after darkness halted Thursday's round. Frittelli and Johnson were back on the course almost immediately. Frittelli bogeyed the first hole and dropped to minus-6.

The second round is underway at the Masters, and the first round hasn't quite finished up yet.

About two dozen golfers were still on the course after being unable to complete 18 holes before darkness fell on Thursday night. Among them was Dylan Frittelli, who played just nine holes on the first day. He spent the night at 4 under, then improved to minus-7 Friday morning, through 17 holes. That put him in a tie with overnight leader Paul Casey.

The first fall Masters was delayed seven months by the coronavirus pandemic. Then the tournament got in only about a half-hour of play before a three-hour delay for lightning on Thursday morning.

Dylan Frittelli is tied for the lead in the first round of the Masters.

The 30-year-old South African picked up three strokes as he completed his rain-delayed first round. He is at 7 under through 15 holes and tied with Paul Casey. The Englishman was able to finish 18 before darkness fell on Thursday.

Also making a move are Justin Thomas and Sungjae Im. They are at 6 under and still on the course finishing their first rounds. Justin Rose, Webb Simpson and Xander Schauffele were at minus 5.

Frittelli was part of the Texas Longhorns team that won the 2012 NCAA championship. He has one win on tour from last year's John Deere Classic.

Dylan Frittelli is making his move up the leaderboard as the twice-delayed first round of the Masters nears completion.

The tournament was postponed from April because of the coronavirus pandemic. When the first fall Masters began on Thursday it lasted only about 30 minutes before heavy rain and lighting forced marshals to clear the course.

Paul Casey had the overnight lead after shooting a 7-under 65. Frittelli was at 4 under through nine holes when darkness came. He came out Friday morning with a pair of birdies to move to minus 6.

The second round was scheduled to begin at around 9:30 a.m.