The Latest: Kansas to begin fall sports without fans 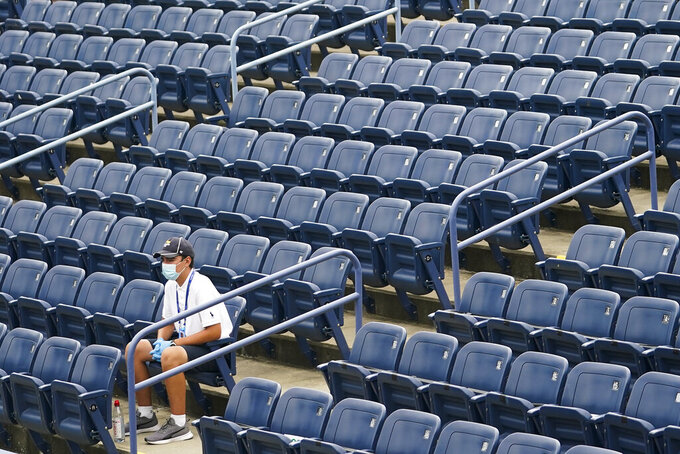 A member of the USTA crew watches a match during the first round of the US Open tennis championships, Monday, Aug. 31, 2020, in New York. (AP Photo/Frank Franklin II)

The University of Kansas announced Monday that it will begin its fall sports season without fans upon the recommendation of its pandemic medical advisory team.

That includes the Jayhawks’ football season-opener against Coastal Carolina on Sept. 12, along with volleyball, soccer and cross country contests.

The prohibition of fans includes tailgating for football at Memorial Stadium and games at the Horejsi Family Volleyball Arena, Rock Chalk Park and Rim Rock Farm through September.

The school plans to revisit the situation before its football game against Oklahoma State on Oct. 3.

Kansas Chancellor Doug Girod said “this is the right decision for our community at this time.”

North Carolina State will open the football and other fall sports seasons with no fans in attendance for home competitions in September.

The school announced the decision Monday, which came as it was resuming football workouts after a weeklong pause on all athletics activities due to a coronavirus cluster. The plan is to be re-evaluated for October at a later date.

The football program had to postpone its season-opening game against Virginia Tech for two weeks to Sept. 26. That made the Sept. 19 home game against Wake Forest the new opening date, though the school said tailgating will not be permitted.

Other sports affected by the decision include men’s soccer, volleyball and cross country.

The NFL’s Carolina Panthers will not have fans in the stands at Bank of America Stadium for their Sept. 13 home opener against the Las Vegas Raiders due to the coronavirus pandemic.

The state of North Carolina remains in Stage 2 of reopening, and further updates from the Gov. Roy Cooper are expected next week.

The Panthers are hopeful at least a limited number of fans will be allowed in for the Oct. 4 home game against the Arizona Cardinals, although much of that could depend on if Cooper moves the state out of Phase 2.

In a statement Monday the team said it has worked “tirelessly” since March to develop and implement a responsible, comprehensive plan to ensure fans and enjoyable and safe game day experience. The Panthers said they were confident they could safely host a limited number of fans, adding that “this is not a choice between a full stadium or an empty stadium. We have offered compromises and alternatives.”

The first four World Cup speedskating events of the 2020-21 season have been canceled because of COVID-19.

The International Skating Union announced Monday that stops in Poland, Norway, Canada, and Salt Lake City, were shelved along with short-track events in Montreal and Laval, Quebec. The canceled events were scheduled for November and December.

The ISU says it is evaluating a hub concept in the Netherlands as an alternative to the first four World Cups.

The ISU says it's still evaluating whether to go ahead with short-track events in Seoul, South Korea, and Beijing in December.

Boca Juniors says it has COVID-19 cases in its squad, threatening preparations for its first Copa Libertadores match on Sept. 17.

The Argentine club did not say how many players were infected, but added they are in good shape.

Boca says all of its players are quarantined in a hotel outside Buenos Aires.

It has suspended training for the next 72 hours.

The Iowa athletic department is pausing workouts for all sports until after Labor Day following a major uptick in the number of coronavirus cases.

The department says there were 93 positive results out of 815 COVID-19 tests taken between last Monday and Sunday. Since the return-to-campus protocol began May 29, there have been 176 positive results and one inconclusive out of more than 2,700 tests.

The Hawkeyes are members of the Big Ten Conference, which announced three weeks ago that it would postpone fall sports until the spring.

The NFL has been conducting daily testing for players throughout training camp and plans to do so through Saturday.

"In the spirit of adaptability, expect the NFLPA to push for modifications or updated recommendations — such as the continuation of daily testing — as the season progresses and new information becomes available,” Tretter, the starting center for the Cleveland Browns, posted on the union website. “We will continue to rely on scientific data to inform our approach for combating this virus. As the science evolves, we will evolve with it.”

Tretter added he was pleased with the protocols the NFL and NFLPA agreed on for training camps. The league has reported few positive cases in the past month, though it did have 77 false positives a week ago that resulted from contamination at the testing lab.

The San Francisco 49ers have placed linebacker Fred Warner on the reserve/COVID-19 list.

Warner didn’t practice on Sunday and then was placed on the COVID-19 list the following day. The list is used for NFL players who either test positive for the coronavirus or have been in close contact with an infected person.

Warner is the third 49ers player to be placed on the list this summer. Receiver Richie James Jr. and running back Jeff Wilson Jr. each had short stints on the list early in training camp.

Paris Saint-Germain says two of its players are suspected of being infected with COVID-19.

The French champion cites a “reassuring” state of health for the players, who were not identified. They are said to be following the required health protocols.

Eight days after losing the Champions League final to Bayern Munich, PSG is not due to start the French season until Sept. 10.

The French league granted PSG’s request for extra days of rest, and the team’s scheduled opening game at Lens was postponed until next week.

Iowa State will allow about 25,000 football fans into Jack Trice Stadium for the Cyclones’ opener against Louisiana-Lafayette on Sept. 12.

Athletic director Jamie Pollard wrote in a letter to fans on Monday that the crowd will be made up of season ticket holders only. Fans will be required to wear face coverings at all times and no tailgating will be allowed. Pollard asks that fans respect others’ wishes for physical distancing.

“An important factor in the decision to allow fans is our belief that Cyclone fans are willing to adhere to our mitigation measures,” Pollard wrote. “The purpose of this letter is to ask for your support in helping create a safe environment while also providing our team an impactful home field advantage. This is an incredible opportunity for Iowa State University to showcase its ability to successfully navigate the challenges associated with large outdoor events during a pandemic.”

Pollard said if mitigation actions are successful, Iowa State will allow season ticket holders to attend the game against Oklahoma on Oct. 3. He said if it’s determined mitigation measures were not followed adequately at the first game, no fans will be allowed the rest of the season.

In a statement Monday, the school said the decision was due to a “depleted roster, the combination of injuries and not all members of its roster returning to Raleigh this semester.” It said N.C. State has notified the Atlantic Coast Conference of its decision.

Players will continue to train with a focus on playing in 2021, or for spring competition if that becomes an option.

Champions League quarterfinalist Atalanta says three of its players have tested positive for the coronavirus.

The Serie A team says in a brief statement that all three players show no symptoms after the preseason tests and have been isolated.

Reserve goalkeeper Marco Sportiello was the only Atalanta player who tested positive during the lockdown.

The Italian league starts on Sept. 19.