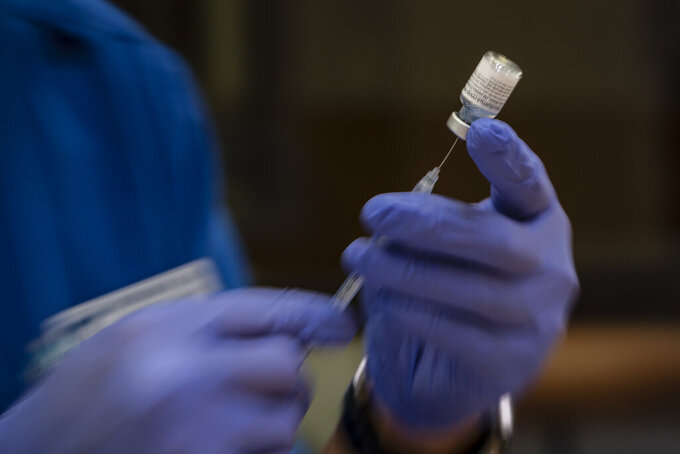 But some restrictions will remain and the 5 million residents of Melbourne won’t be allowed to travel to regional centers in surrounding Victoria state.

State officials say the lockdown is being ended after two weeks following only one new coronavirus case being detected in the latest 24-hour period linked to the Melbourne cluster. The new case brings the number of infections in the cluster to 68.

Children will be able to return to school Friday and travel restrictions will be changed to allow Melbourne residents to travel up to 25 kilometers (16 miles) for non-essential reasons rather than 10 kilometers (6 miles).

— Preparations around Olympic venues, virus cases down for Tokyo Games

— Master Card Foundation to spend $1.3B to vaccinate 50 million Africans among population of 1.3 billion

— India’s daily coronavirus infections dip below 100,000 for the first time in more than two months

UNITED NATIONS -- The U.N. General Assembly has overwhelmingly approved a declaration calling for urgent action to end AIDS by 2030. It notes “with alarm” that the COVID-19 pandemic has exacerbated inequalities and pushed access to AIDS medicines, treatments and diagnosis further off track.

The declaration adopted Tuesday commits the assembly’s 193 member nations to reducing annual new HIV infections to under 370,000 and annual AIDS-related deaths to under 250,000 by 2025. It also calls for progress toward eliminating all forms of HIV-related stigma and discrimination and urgent work toward an HIV vaccine and a cure for AIDS.

The assembly says the coronavirus pandemic has created setbacks in combating AIDS, “widening fault lines within a deeply unequal world and exposing the dangers of under-investment in public health, health systems and other essential public services for all and pandemic preparedness.”

BEIJING — The southern China metropolis of Guangzhou has ordered the closure of cinemas, theaters, nightclubs and other indoor entertainment venues as authorities seek to contain the country’s latest coronavirus outbreak.

The controls announced Wednesday are even stricter in parts of the city where the risk of infection is categorized as high or moderate. Guangzhou has isolated several neighborhoods where cases have been detected and barred people from leaving the city or the surrounding province of Guangdong unless absolutely necessary.

Guangzhou has reported more than 100 cases of local transmission since May 21, with eight more announced Wednesday.

China has largely eliminated local transmissions elsewhere, with a total of 91,316 virus cases and 4,636 COVID-19 deaths reported in the country.

LITTLE ROCK, Ark. — Arkansas will no longer require students exposed to the coronavirus to quarantine so long as they are fully vaccinated against the virus.

People are considered fully vaccinated two weeks after their second shot of the Pfizer or Moderna vaccine or their only shot of the Johnson & Johnson vaccine.

The CDC says about 40% of Arkansas’ population has received at least one dose of the vaccine and nearly 32% are fully vaccinated against the coronavirus.

WASHINGTON — The U.S. is on pace to fall short of President Joe Biden’s aim to have 70% of Americans at least partially vaccinated by July 4.

The White House has launched a month-long blitz to combat vaccine hesitancy and a lack of urgency to get shots, particularly in the South and Midwest. But it is increasingly resigned to missing the president’s vaccination target.

Dr. Anthony Fauci told reporters at a briefing on Tuesday that he still hopes the goal will be met “and if we don’t, we’re going to continue to keep pushing.”

So far 14 states have reached 70% coverage among adults, with about a dozen more on pace to reach the milestone by July 4. But the state-to-state variation is stark.

Cardona said Tuesday of the clinic at Henry Ford College in Dearborn that “this is a great example of how colleges can do their part to bring people in to get them vaccinated.”

Cardona also talked about the Biden administration’s COVID-19 College Challenge, in which colleges and universities commit to working to get their communities vaccinated. The challenge is part of President Joe Biden’s effort to get at least one vaccine dose into 70% of American adults by July 4.

JOHANNESBURG—South Africa’s health minister has been placed on special leave over a corruption scandal involving an irregular government contract.

Zweli Mkhize has been spearheading the COVID-19 response in South Africa, which has the most cases and deaths in Africa.

The contract saw $11 million paid by the health department Mkhize heads to a company connected to two people who used to work for him.

The move was announced by President Cyril Ramaphosa in a statement from his office Tuesday. It said Mkhize was placed on special leave “to attend to allegations and investigations” around the irregular contract.

MILWAUKEE — A former pharmacist in Wisconsin who intentionally ruined more than 500 doses of COVID-19 vaccine has been sentenced to three years in prison.

Steven Brandenburg, of Grafton, was sentenced Tuesday after pleading guilty in February to two felony counts of attempting to tamper with a consumer product. He had admitted to removing the doses manufactured by Moderna from a refrigerator for hours at Aurora Medical Center in Grafton, located just north of Milwaukee. Brandenburg said in a statement before receiving his sentence that he felt “great shame” and accepted responsibility for his actions. The Milwaukee Journal Sentinel reports he apologized to his co-workers, family and the community.

Prosecutors asked for a sentence of three years and five months. Brandenburg faced a maximum penalty of 10 years of imprisonment and $250,000 in fines for each felony count.

Brandenburg is an admitted conspiracy theorist who believes vaccines are a product of the devil. Brandenburg also secretly substituted saline for flu vaccine that he was mandated to receive and persuaded several co-workers to secretly swap saline for their flu vaccine as well, according to court filings.

NEW YORK — Pfizer says it is expanding testing of its COVID-19 vaccine in children younger than 12.

After a first-step study in a small number of young children to test different doses, Pfizer is ready to enroll about 4,500 young volunteers at more than 90 sites in the U.S., Finland, Poland and Spain.

The vaccine made by Pfizer and its German partner BioNTech already is authorized for emergency use in anyone 12 and older in the U.S. and European Union.

Enrollment of 5- to 11-year-olds began this week. Those youngsters will receive two vaccine doses of 10 micrograms each -- a third of the teen and adult dose -- or dummy shots. Enrollment of children as young as 6 months will start in a few weeks using an even lower dose, 3 micrograms per shot.

COLUMBUS, Ohio — Ohio Gov. Mike DeWine is trying to persuade citizens to get vaccinated as the state rushes to administer around 200,000 doses of the Johnson & Johnson vaccine set to expire in two weeks.

The Republican governor, like his counterparts across the country, is facing slowing vaccination rates as health officials say the majority of individuals who wanted the vaccine have already received it and the rest are either vaccine-hesitant or unwilling to receive it.

The state is also working against the clock to push the one-shot Johnson & Johnson to vaccine providers and asking them to distribute as many doses as possible. The doses are set to expire on June 23.

DeWine said Ohio and other states don’t have legal options for sending the vaccine elsewhere, either to other states or other countries.

COLUMBIA, S.C. — South Carolina Gov. Henry McMaster on Tuesday announced a cash infusion for the state’s technical colleges, aimed at training the jobless in new skills as they re-enter the workforce.

The Republican says he’s allocating $8 million in federal coronavirus relief aid to a partnership between the state’s 16 tech schools and the Department of Employment and Workforce.

Starting this week, the agency will contact the 87,000 South Carolinians already eligible for jobless benefits to advise them of tuition-free, short-term training classes designed to quickly prepare them for jobs like welding and truck driving, according to Tim Hardee, president of the state’s technical college system.

The funds come from a total of more than $48 million provided under the Coronavirus Aid, Relief and Economic Security Act, to be used at the governor’s discretion.

TOKYO — Roads are being closed off around Tokyo Olympic venues for the event scheduled to begin July 23.

With six weeks to go, the roadblocks are appearing around the new $1.4 billion National Stadium, which will host the opening ceremony.

This is a sign that Tokyo Olympic planners and the International Olympic Committee are moving forward despite public opposition and warnings about the risks of the games becoming a coronavirus spreader event. New infections rates are going down in Tokyo. But the city and other parts of Japan remain under a state of emergency until June 20.

The number of hospitalizations and the seriously ill have also decreased, but the levels are still higher than last fall when COVID-19 variants were not prevalent in Japan.

Japan has registered 13,500 confirmed deaths to the coronavirus.

BERLIN — Germany officials say it will exempt people accredited for soccer’s European Championship from quarantine when they arrive in the country.

The Interior Ministry says the Cabinet will approve the exemption this week. It says it will apply to everyone accredited by the organizing committee involved in the tournament, which opens on June 11. Munich is one of the venues for the tournament, which is taking place at venues in multiple countries this year.

The exemption is particularly relevant for people coming from Britain, the only country in Europe currently on a German list of “virus variant areas.” All arrivals from such areas are currently required to spend 14 days in quarantine, and airlines and others are restricted to transporting German citizens and residents.

Those restrictions will be dropped for Euro 2021 participants. But the Interior Ministry says they’ll still have to abide by rules such as daily testing. The exemption will last until July 28.

TORONTO — The Mastercard Foundation says it will spend $1.3 billion over the next three years to acquire and deliver coronavirus vaccines for more than 50 million people in Africa.

The first-of-its-kind initiative from the Mastercard Foundation is aiming to bolster Africa’s lagging vaccination campaign amid widespread fears of a third wave of infections on the continent.

The foundation will purchase single-dose Johnson & Johnson vaccine at the discounted rate negotiated by the African Union during its 220 million-dose deal with the company. A spokeswoman says the doses will become available in August.

The announcement Tuesday from the Toronto-based Mastercard Foundation comes days after the World Health Organization said Africa is encountering an alarming spike in virus cases and “a near halt” of vaccine shipments.

NEW ORLEANS — Louisiana lawmakers have taken aim at coronavirus vaccines, sending Gov. John Bel Edwards two bills that would keep state and local government agencies from requiring individuals to be immunized in order to be eligible for certain services.

Edwards has championed vaccines against the coronavirus and regularly urges Louisiana residents to get shots. He hasn’t taken a position on the legislation that passed Monday.

No state agency in his administration has publicly proposed mandating vaccination for services.

KATHMANDU, Nepal — Nepal has resumed its stalled coronavirus vaccination campaign with 1 million doses given by China after the Himalayan nation made international pleas for help.

Thousands of 64-year-old people lined up at vaccination centers even before they opened Tuesday. People ages 60-63 are scheduled to be eligible for shots in coming days.

Nepal’s vaccination campaign began in January but stalled when neighboring India suffered a coronavirus surge and banned exports of the AstraZeneca vaccine it produces. Nepal had received 1 million AstraZeneca doses donated by India and paid for 2 million more but never received half the shipment.

That left 1.4 million people over age 65 who had received an initial dose of AstraZeneca vaccine uncertain if they would receive their second shot.