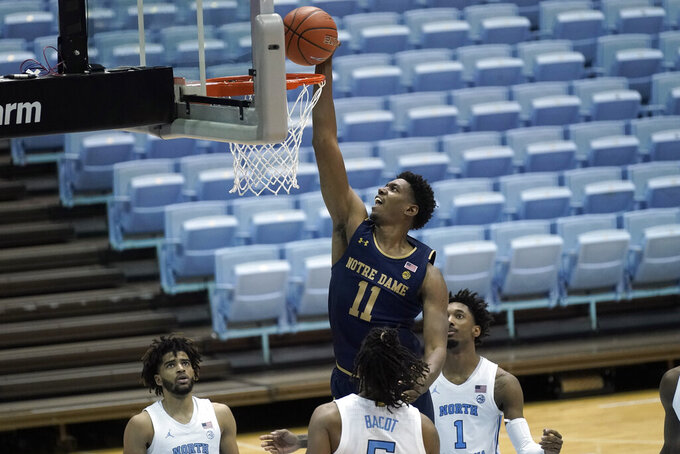 The Memphis women’s basketball game against USF scheduled for Sunday has been canceled. The Tigers have elected not to compete due to health and safety concerns.

It's the sixth game this season the team has been affected by health and safety concerns. The Tigers also had matchups against Southern Illinois in late November, UCF in late December, and Wichita State earlier this week postponed and all games against SMU canceled.

The Tigers are next scheduled to play Wednesday at Cincinnati.

The men's basketball game between Notre Dame and Howard scheduled for Monday has been canceled because of COVID-19 concerns in the Howard program.

The Bison had been set to host Notre Dame on Martin Luther King Jr. Day.

“We are all incredibly disappointed by this cancellation,” Howard athletic director Kery Davis said. “This was a tremendous opportunity to bring national exposure to our basketball team and the university. However, it goes without saying that the health and welfare of our student-athletes is our priority first and foremost.”

The coach of Canadian tennis star Bianca Andreescu has tested positive for COVID-19 after arriving in Melbourne for the Australian Open.

Andreescu will begin a 14-day quarantine at her hotel, her agent, Jonathan Dasnieres de Veigy, told The Canadian Press in a text message.

Coach Sylvain Bruneau said in a statement he followed all safety protocols and procedures, tested negative within 72 hours of departure and felt “perfectly fine” when boarding a flight in Abu Dhabi.

“I am extremely saddened and sorry for the consequences now on everyone’s shoulders sharing my flight,” said Bruneau, who helped guide Andreescu during her breakout 2019 season. “The rest of my team is negative and I sincerely hope that any further disruption is kept to a minimum.”

Andreescu was planning to return at the Jan. 31-Feb. 6 Melbourne Summer Series, a warmup event for the Australian Open. It will be her first competitive tournament in about 15 months.

The Winnipeg Jets canceled practice Saturday because of potential exposure to COVID-19.

The NHL team did not provide details and said information regarding plans for Sunday will come later. The Jets are to play at Toronto on Monday.

Jets forward Nikolaj Ehlers was held out of practice Wednesday while in COVID-19 protocol but played in Winnipeg’s season opener, a 4-3 overtime victory against visiting Calgary on Thursday.

The NHL started its season Wednesday amid a spike in COVID-19 cases in both Canada and the United States. The Dallas Stars’ first four games were postponed after 17 players tested positive for the novel coronavirus.