The Latest: Most of a Mississippi city is without water 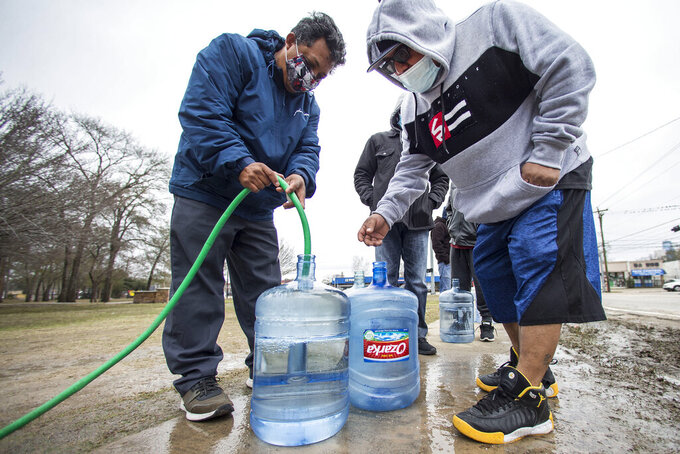 Victor Hernandez, left, and Luis Martinez fill their water containers with a hose from a spigot in Haden Park, Thursday, Feb. 18, 2021 in Houston. Texas officials have ordered 7 million people to boil tap water before drinking it following days of record low temperatures that damaged infrastructure and froze pipes. (Brett Coomer/Houston Chronicle via AP)

JACKSON, Miss. — Almost all of Jackson, a city of around 150,000 people, is now without water, Mayor Chokwe Antar Lumumba said.

Lumumba said public works crews are working to pump as much water as they can to refill the city’s tanks. The city is approaching a critical shortage in chemicals used to treat the city’s water, the mayor said. Road closures are making it difficult for distributors to make needed deliveries.

“We are dealing with an extreme challenge with getting more water through our distribution system,” he said. “This becomes increasingly challenging because we have so many residents at home, and while the residents are at home, that means that people are utilizing or attempting to use the water at a higher rate.”

Linda Weathersby, an administrative assistant for the mayor’s office in Jackson, lives in an apartment building for seniors in the city.

There are 85 seniors who have been living in her building without water since Monday, Weathersby, said. The assistant manager at her building bought bottled water and was bringing to residents door-to-door.

Weathersby said she’s spent part of the day outside with a bucket collecting ice to melt and use to flush her toilet.

“I’ve been out there getting water, and my back’s hurting now,” she said.

PORTLAND, Ore. -- More than 100,000 customers remained without power Thursday in Oregon, a week after a massive snow and ice storm swept into the Pacific Northwest and brought the most dangerous conditions seen recently by utility workers.

Maria Pope, the CEO of Portland General Electric, said during a news conference Thursday that she expects power to be restored to more than 90% of the remaining customers who are still in the dark by the end of Friday. Pope says many of the places without power are in more remote areas or have extensive damage.

As for when the remaining customers in the dark will receive power again, Pope says that the timeline is still being determined, but updated information can be found on Portland General Electric’s website.

MAXWELL, Neb. — A Nebraska man was found dead in his home Monday night when the temperature inside the home was 14 below zero.

The Lincoln County Sheriff’s Office said Wednesday it’s not clear exactly when 65-year-old Danny Effenbeck of Maxwell died. He was last seen Feb. 9 when his brother took him grocery shopping. Test results that will determine how Effenbeck died are pending.

Members of Maxwell’s Volunteer Fire Department found Effenbeck’s body when they went to check on him.

“They were doing random checks of people around Maxwell who live alone, and they knew (Effenbeck) had a history of not having utilities,” Lincoln County Sheriff Jerome Kramer said Wednesday afternoon.

Kramer said Effenbeck had relied on a propane heater to warm his home for several years, but the home was frigid when he was found.

ABILENE, Texas -- Six people have died of the cold in a West Texas county, including a 60-year-old man found dead in his bed in a frigid house.

Abilene Fire Chief Cande Flores said three people have died of the cold in the city. A homeless 67-year-old man died Monday. Two other people died Wednesday, including the man found dead in his bed. Flores said the freezing temperature was the same in the house as outside. The man’s wife was found nearby near death and has been hospitalized.

Another man died at a health-care facility after a lack of water pressure made medical treatment impossible.

DEL RIO, Texas —- As some parts of Texas began to slowly warm up from this week’s winter weather, other areas dealt with another round of snowfall on Thursday.

Del Rio, located along the U.S.-Mexico border in the southwestern part of the state, had received nearly 10 inches (25.4 cm) of snow on Thursday, surpassing the city’s record for snowfall in one day, according to the National Weather Service. With snow still falling, that number was expected to grow.

While power was being restored to many parts of Texas, officials in Del Rio asked residents to conserve electricity or risk having the local system lose power.

About 150 miles (241 km) east of Del Rio, residents in San Antonio also dealt with snowfall and frigid temperatures. Forecasters called for up to 3 inches (7.6 cm) of snow in the city.

San Antonio Mayor Ron Nirenberg, in a Facebook post, asked residents to stay home as local roadways were becoming treacherous due to the snowfall.

Meanwhile, power was restored to more homes and businesses in Texas on Thursday. But the crisis was far from over, with many people still in need of safe drinking water.

DALLAS — The head of the Texas power grid operator says the agency removed the names of its board members from the website after they received threats during power outages that affected millions of Texans stuck in a brutal winter storm.

“Threats were being made to board members,” Bill Magness, president and CEO of the Electric Reliability Council of Texas, said Thursday. “We were very concerned about both employee and board member safety because of the things we have been receiving the past few days.”

Magness said the agency will put the directors’ contact information back on the website in the next few days because it is public information. ERCOT has caught the wrath of Texans stuck in dark, freezing homes after the agency ordered utilities to cut back service when power demand outstripped supply.

LITTLE ROCK, Ark. — Southwest Power Pool says it’s no longer under an emergency alert for the utilities it covers in 14 states.

The 14 states in the central United States have seen intermittent, rolling blackouts this week as utilities face surging demand for energy during frigid, wintry weather. The states stretch from the Texas Panhandle to the Dakotas, and it does not include the majority of Texas.

Southwest Power Pool, a group of utilities covering 14 states from the Dakotas to the Texas Panhandle, says customers should still conserve energy until at least 10 p.m. Saturday but that rolling blackouts are not needed under current conditions.

DETROIT — Crews are unlikely to safely rescue a man who fell through ice on the Detroit River, a U.S. Coast Guard spokesman said.

The man was with a couple of other people when he walked out onto the ice just off Belle Isle about 5 p.m. Wednesday and began “jumping up and down,” Lt. Jeremiah Schiessel said. It was “not likely” that the search would end in a rescue, he said.

“It’s not looking like this will have a good outcome,” he said. Crews were unable to get to the spot where the man was last seen because the ice was too thin, Schiessel said.

The Department of Health and Human Services is now asking clinics to plan to postpone appointments because of the delays fueled by severe winter weather.

None of the more than 163,000 first and second doses of the Moderna vaccine scheduled to arrive this week have been delivered by President Joe Biden’s administration, the state health department said. The state also noted that only a limited number of the nearly 127,000 expected Pfizer vaccines have been shipped.

North Carolina health officials said they are working with the U.S. Centers for Disease Control and Prevention to reduce the consequences of the delay.

HOUSTON —- The winter storm had various hospitals in the Houston area on Thursday working through problems due to having no water or low water pressure at their facilities, forcing the cancellation of some surgeries

At Houston Methodist, two of its community hospitals were working without running water but still taking care of patients, said spokeswoman Gale Smith.

Low water pressure is resulting in the canceling of most nonurgent surgeries and procedures for Thursday and possibly Friday and pipes were bursting across Methodist’s hospitals but being repaired as they happened, Smith said.

Meanwhile, Mayor Sylvester Turner said he expects that residents in the nation’s fourth-largest city will have to continue boiling their tap water before drinking it until Sunday or Monday because of damaged infrastructure and frozen pipes from this week’s winter storm.

Turner said Thursday the city’s water system has to be properly pressurized and stabilized and then water samples have to be lab tested before it can be determined it is safe to drink.

To help residents in need of drinking water until the city’s system is deemed safe, officials planned to start distributing bottled water to residents at locations throughout the city starting Thursday afternoon.

Integris Baptist lost water pressure at two of its hospitals, according to city utilities director Chris Browning. The water loss affected the ability to consistently heat a hospital building, said Integris spokesperson Brooke Cayot, and surgical procedures were moved to another of its hospitals while heat has been restored.

The drop in water pressure was due largely to customers running faucets to prevent frozen and burst water lines, and nearly tripling the amount of water used, according to city utilities director Chris Browning.

“Last (Wednesday) night our demand was over 140 million gallons at it’s lowest point,” Browning said. “The typical late night demand during this time of year is 50 million gallons.”

NEW YORK -- Snow is falling in the northeastern United States, with up to 8 inches expected in the New York and New Jersey through Friday. The winter storm also is bringing ice and rain in some areas, prompting authorities to shutter at least three of New Jersey's coronavirus vaccination sites.

AUSTIN, Texas -- Texas Gov. Greg Abbott said Thursday that the managers of the state’s main electrical grid failed on each of its responsibilities to prepare for the winter and the winter storm that left millions in the dark and in the cold.

The Texas Republican repeated that the performance of the Electric Reliability Council of Texas “was unacceptable” and reforms are needed. He also said that, in addition to a thorough investigation of the council’s performance, he is asking the Legislature to mandate the winterization of all generation and transmission facilities and to offer funding for that work.

“It is absolutely acceptable and can never be replicated,” Abbott said.

All of the power blackouts resulting from a lack of electric generation capacity and the need to shed customers are over, Abbott said. All remaining power outages result from lines being downed or the need to manually reconnect the customer to service, he said. Those are not the state responsibility.

However, he warned that state residents “are not out of the woods” when it comes to energy generation capacity as temperatures remain well below freezing statewide and south central Texas was still threatened by a winter storm.

BIRMINGHAM, Ala. — More than 320,000 homes and businesses were without power in Louisiana, Mississippi and Alabama early Thursday after a wave of storms dumped as much as 4 inches of snow and ice across a region that still had some remnants of wintry precipitation left over from earlier in the week.

Dozens of school systems canceled classes, switched to online learning or opened late, and conditions might not improve much in some places until Friday afternoon, when temperatures are finally supposed to rise above freezing for a few hours.

The largest concentration of outages was in a band across central Mississippi. Much of the rest of the Deep South was spared the worst weather.