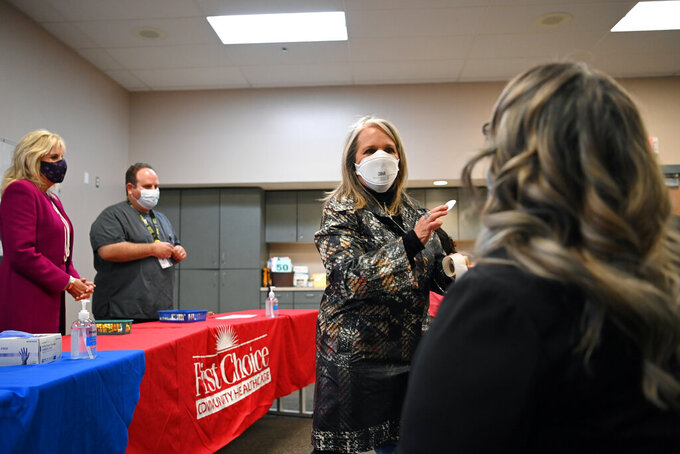 SANTA FE, N.M. -- New Mexico health officials say they are preparing to respond to pockets of vaccine hesitancy in some communities as overall interest increases in receiving the vaccine for COVID-19.

State Health Secretary Tracie Collins said Wednesday that statistics on those trends are being reviewed this week. New Mexico is among the top states for immunization rates with nearly 40% of the population fully vaccinated.

Collins said the state is exploring the recruitment of “community champions” — trusted residents of regions with vaccine hesitancy who can address concerns about safety and efficacy. Question-and-answer style town halls are also a possibility. And video testimonials about coronavirus vaccines already have been recorded.

“We’ve got a lot of work we’re going to be doing these next few weeks to really get ahead of this vaccine hesitancy,” Collins said.

Human Services Secretary David Scrase added that physicians and other direct medical providers also have a crucial role to play in allaying fears.

“It really is more, I think, about giving people the opportunity to have a conversation about what their concerns are ... and work through those,” Scrase said.

— Biden pushes tax credit, vaccines for all over age 16

— Greece to reopen tourism services on May 15

ANNAPOLIS, Md. — Maryland Gov. Larry Hogan says the state is stepping up efforts to get people vaccinated against the coronavirus.

The governor said Wednesday that the “No Arm Left Behind” initiative will involve all state agencies and a variety of private companies.

The governor says demand for shots is still high but the state is having to get more creative in using its vaccine supply.

ROME — The Italian government is opening cinemas, theaters and concert halls to limited numbers of spectators in regions with the lowest level of contagion starting next Monday, while confirming the opening of outdoor restaurant dining for lunch and dinner.

Limits were set with a maximum 500 people indoors and 1,000 outdoors.

This is the first national loosening of restrictions since the fall surge and the arrival of quick-spreading variants of the novel coronavirus. The level of contagion has slowed as the vaccine campaign progresses, but virologists are warning that the government is sending a message of “everything open” before the situation is under control.

Cabinet ministers meeting Wednesday also confirmed the current 10 p.m. curfew. That drew ire from the right-wing League, which said it would abstain when the measures come to parliament for a vote.

MIAMI — One of Florida’s largest hospital networks announced Wednesday it would no longer administer first vaccine shots to the public after the end of the month because of a “decrease in demand.”

The Seattle Times reports that state Health Secretary Dr. Umair Shah said Wednesday the state’s new goal is 90,000 vaccines daily if the federal government can provide them. Earlier this year, the goal was 45,000 shots daily.

Shah also said the state is hearing some concerns about the willingness of Washington residents to seek vaccines, with many scheduled appointments going unfilled. Everyone over age 16 is now eligible for vaccination and a third of the state’s residents have received at least one dose.

JOHNSTON, Iowa — Gov. Kim Reynolds implored Iowans on Wednesday to get vaccinated for COVID-19, but she refused to acknowledge that slowing demand for the shots is greatest in Republican parts of the state or that there’s a political aspect to the trend.

After 43 of Iowa’s 99 counties this week declined additional shipments of vaccine because of a decrease in demand, Reynolds, a Republican, promoted the vaccination effort by sharing the stage at her weekly news conference with National Guard Adjutant General Ben Corell, who is still recovering from a COVID-19 infection last winter. She also noted that Republican Lt. Gov. Adam Gregg would be vaccinated later this week in Sioux City.

Of the 43 Iowa counties to decline vaccines, the Centers for Disease Control and Prevention has identified 12 as having high rates of coronavirus transmission. Voter registration information shows that all 12 are heavily Republican counties

The latest study looked at recent infections in about 75 Chicago skilled nursing facilities. Nearly 8,000 residents and nearly 7,000 staff received two doses of vaccine at the facilities. In those fully vaccinated, health officials detected 22 breakthrough infections. Most experienced no symptoms, but two were hospitalized and one died.

Other statistics have suggested breakthrough rates are significantly lower. However, residents of nursing homes and other skilled nursing facilities tend to be older and more frail than the overall population, and some studies have suggested vaccine effectiveness can be lower in that group.

The Centers for Disease Control and Prevention on Wednesday posted the study online.

Last week, federal officials reported about 5,800 breakthrough infections have been seen in about 40 states that have reported such data. That count included 74 deaths.

MISSION, Kan. — About three-quarters of Kansas counties have turned down new shipments of coronavirus vaccine at least once over the past month and several have done so for four straight weeks, state data show.

The numbers, however, don’t account for doses that may have been shipped through the federal government to pharmacies and some clinics.

Data show that Just 37% of the state’s residents are at least partially vaccinated. That percentage is far from where the state needs to get to reach a level of herd immunity that would make it difficult for the virus to spread.

The country should continue with its vaccination drive since the issues were temporary and treatable, said Dr. Kulkanya Chokpaibulkit, a member of the committee investigating the cases.

The six health workers were vaccinated earlier this month and had a reaction five to 30 minutes after getting their shot, Thai health officials said at a news conference Wednesday.

More than 300,000 doses from the same lot have been given to others nationwide and there were no other reports of stroke-like symptoms elsewhere, officials said.

Reactions included dizziness, weakness in limbs, facial paralysis and sleepiness. The Thai cases are nothing like the rare blood clots linked to the AstraZeneca and Johnson & Johnson vaccines, which occurred days to weeks after vaccination.

Scientists expect some serious health issues and deaths to be reported with mass vaccinations, simply because millions of people are receiving the shots and problems would be expected to occur randomly in a group so large. The vast majority of these end up not being connected to the vaccine.

Sinovac’s director of brand management and public relations told The Associated Press it will investigate the Thai cases.

MADRID — Spain is set to administer its first doses of Johnson & Johnson’s COVID-19 vaccine after European regulators gave it their approval while deeming it had a “possible link” to extremely rare cases of blood clots.

Central authorities on Wednesday distributed the lot of 146,000 shots that had been kept in storage to regional healthcare managers for their immediate use.

Health Minister Carolina Darias said authorities will stick to their plan of using the single-dose J&J vaccine first on those between 70-79 years old, while not placing any official age limits on the vaccine.

Spain has limited the AstraZeneca vaccine, which is also linked to extremely rare blood clots, for those over 60.

Hampered like the rest of Europe by shipment delays during the first three months of the vaccination program, Spain has picked up the pace recently as the vaccines start to flow into the country.

ATHENS, Greece — Greece’s prime minister says the country’s tourism industry will open on May 15 when a ban on travel between different regions in the country will be lifted.

Prime Minister Kyriakos Mitsotakis made the announcement in a televised address Wednesday, adding that restaurants and cafes will be allowed to reopen in outdoor areas starting on May 3. Restrictions, many of which have been in effect since early November, will remain in place over the Orthodox Easter on May 2.

Despite the lockdown measures, Greece has struggled to contain a flare-up in cases that started in late January. Its mortality rate remains above the European Union average.

The total confirmed death toll in Greece reached 9,713 on Wednesday.

ANKARA, Turkey — Turkey recorded another daily record of COVID-19 deaths at 362 in the last 24 hours, according to the Health Ministry.

The country has been placed under a partial lockdown since April 13, which involves an extended evening curfew on weekdays, a return to online education and a ban on unnecessary intercity travel. President Recep Tayyip Erdogan has said the government will impose stricter measures if the infection and death rates fail to decline.

Officials have blamed the faster-spreading variants for the rising number of cases and deaths.

TUCSON, Ariz. — A plan to establish a large federally supported mass vaccination in metro Tucson is being shelved and Pima County is instead asking for mobile vaccination sites.

The county is pivoting to ask the Federal Emergency Management Agency for mobile sites capable of providing about 300 shots daily to reach populations that could use help getting vaccinated, said County Administrator Chuck Huckleberry.

CAIRO — Egypt’s health minister says a southern province has seen a “slight but continuous” spike in confirmed cases of coronavirus, amid calls to impose restrictions to contain the spread.

Authorities have reported 400-450 cases per week amid a third wave of the pandemic in Sohag province. That compares to an average of 600 cases weekly at the peak of the first wave last summer, Health Minister Hala Zayed said in a statement.

Zayed’s report came as the head of the doctors’ union in Sohag, Dr. Mahmoud Fahmy, called for authorities to impose a curfew across the province to stem the spread.

Fahmy said this week that hospitals designed to treat COVID-19 patients in Sohag were full, and there was a shortage of ventilators.

WASHINGTON — President Joe Biden met the goal of administering 200 million coronavirus doses in his first 100 days in office. More than 50% of adults are at least partly vaccinated and about 28 million vaccine doses are being delivered each week.

“We’re entering a new phase of our vaccination efforts,” Biden said in a White House speech on Wednesday, noting the first months of the rollout were aimed at older people and essential workers. “Now our objective is to reach everyone, everyone over the age of 16 in America.”

Biden added: “Vaccines can save your own life, but they can also save your grandmother’s life, your co-worker’s life, the grocery store clerk or the delivery person helping you and your neighbors get through the crisis. That’s why you should get vaccinated.”

Also, the White House announced its trying to overcome diminishing demand for COVID-19 shots by offering businesses a tax incentive to give employees paid leave to get vaccinated.

NEW YORK — U.S. regulators say a Baltimore factory contracted to make Johnson & Johnson’s COVID-19 vaccine was dirty, didn’t follow proper manufacturing procedures and had poorly trained staff. The problems resulted in contamination of a batch of material that was going to be put in the shots.

The Food and Drug Administration on Wednesday released a 13-page report detailing findings from its recent inspection of the now-idle Emergent Biosciences factory. J&J and Emergent say they’re working to fix the problems.

The nearly 8 million doses of J&J vaccine that have been used in the U.S. came from European sources.

Agency inspectors said a batch of the bulk drug substance for J&J’s single-shot vaccine was contaminated with material used to make COVID-19 vaccines for another Emergent client, AstraZeneca. That batch, reportedly enough to make about 15 million J&J vaccine doses, had to be thrown out.

Nothing made at the factory for J&J has been distributed yet. The Baltimore factory halted production late last week at the request of the FDA. The agency hasn’t given emergency approval to the factory, which is needed before any vaccine material made there can be distributed.