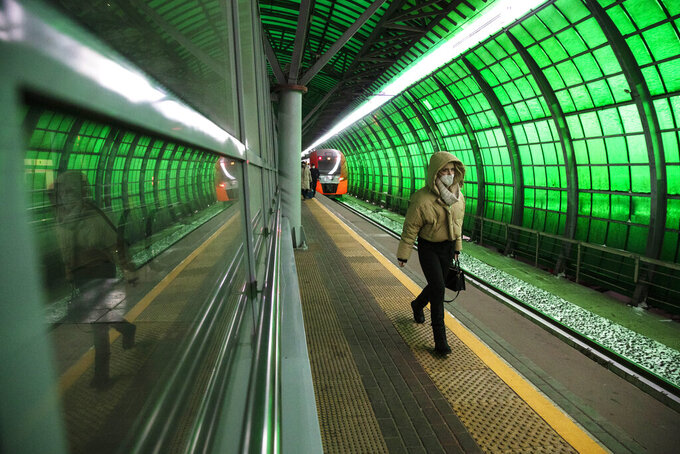 A woman wearing a face mask to protect against coronavirus walks at a train station in Moscow, Russia, Monday, Jan. 11, 2021. (AP Photo/Pavel Golovkin)

WELLINGTON, New Zealand — New Zealand will soon require that travelers from most countries show negative coronavirus tests before they leave for New Zealand.

COVID-19 Response Minister Chris Hipkins says New Zealand is in a fortunate position to have stamped out community spread of the virus, but takes nothing for granted.

The new rules will require travelers to have a negative test within 72 hours of departure.

The rules will be imposed on travelers from the U.S. and the U.K. beginning Friday and most other countries soon after. Travelers from Australia and some Pacific nations will be exempted.

Until now, New Zealand has relied on placing new arrivals into a mandatory two-week quarantine.

— President-elect Joe Biden faces challenge in guiding America past the Trump era, but success on virus, economy may help

CARSON CITY, Nev. — Nevada is making changes to its distribution plan for coronavirus vaccines in an effort to get shots into residents’ arms more quickly.

The state received its first vaccine shipment four weeks ago but has been struggling to get people inoculated at the rate officials initially anticipated.

The plan also lowers the age threshold for priority distribution from 75 to 70.

WASHINGTON — U.S. health officials have created a website to help people find where they can get antibody drugs for COVID-19, medicines that may help prevent serious illness and hospitalization if used early enough after infection occurs.

Two of these drugs — from Eli Lilly and Regeneron Pharmaceuticals — have been authorized for emergency use in the U.S. but red tape, health care staff shortages and other problems have prevented many patients and doctors from getting them.

Department of Health and Human Services officials said Monday that only 25% of the more than 641,000 treatment courses distributed to states and local health sites have been used as of last week.

A big problem has been finding a place that has the drugs. The web site includes a tool where people can find locations administering the treatment within 50 miles. Doctors will determine if patients meet the criteria. Treatment must start within 10 days of first symptoms.

The drugs are free, although people may be charged a fee for the IV infusion, a one-time treatment that takes about an hour.

HARTFORD, Conn. — Connecticut will open its first mass COVID-19 vaccination site at the University of Connecticut’s football stadium within the next 10 days as the state prepares to administer shots to residents ages 75 and older, Gov. Ned Lamont said Monday.

Rentschler Field in East Hartford will be providing mass vaccinations along with about a half-dozen other large sites that will open over the next two weeks to provide the shots, the governor said.

Vaccinations also will be available at private providers’ offices and health clinics. Connecticut also plans to offer the shots through mobile vaccination units for poor and other underserved communities.

Health care workers have been among the first to be vaccinated in Connecticut, and the state recently finished vaccinating nursing home residents.

Advanced registration for vaccinations for people 75 and older is scheduled to begin Thursday, with the group receiving shots beginning next Monday, Jan. 18.

ARLINGTON, Texas — Gov. Greg Abbott said Monday that Texas will be able to rapidly increase the rate of COVID-19 vaccinations by using new mass hubs for getting shots, but the effort is still limited by the supply of medicine coming from the federal government.

The state has seen a surge in newly confirmed coronavirus cases, hospitalizations and deaths. State health officials report more than 13,000 coronavirus patients currently in hospitals statewide, and nearly 30,000 deaths since the pandemic started.

The site will fully transition to an around-the-clock operation at midnight. The goal is to vaccinate 6,000 people per day, Christ said.

“Today as we mark the opening of this facility, it’s my privilege as a medical doctor to administer some of the first doses of vaccine,” said Christ, who previously received both doses herself and reported no side effects.

ATLANTA — Georgia’s plan to expand access to the coronavirus vaccine for people over 65 is off to a rocky start.

The websites of at least two public health districts crashed Monday, and other districts reported overwhelming demand for appointments. The state was already struggling with its vaccine rollout before the latest woes.

Coastal Health District Director Lawton Davis said he understood people were frustrated, but health departments were stretched thin. Gov. Brian Kemp said Friday he wasn’t happy with the state’s progress in administering the vaccine, and officials had to “keep moving the needle.”

The state has now opened up vaccine access to law enforcement, firefighters and first responders in addition to people over 65.

BATON ROUGE, La. — Louisiana is boosting its distribution of coronavirus vaccines to the elderly.

The state on Monday increased the number of doses available to people ages 70 and older this week and expanded the locations where they can get the shots to include every parish of the state.

The Department of Health’s list of pharmacies offering the vaccine to the elderly numbered 107 last week. It has grown to 209 pharmacies and health clinics this week.

Gov. John Bel Edwards’s administration also is steering thousands more doses to the facilities for vaccinations of people 70 and older.

Demand remains certain to exceed supply. People need to make an appointment to get vaccinated.

SAN DIEGO — Several gorillas at the San Diego Zoo Safari Park have tested positive for the coronavirus in what is believed to be the first cases among such primates in captivity.

Lisa Peterson, the park’s executive director, told The Associated Press on Monday that eight gorillas at the park are believed to have the virus and several have been coughing.

It appears the infection came from a member of the park’s wildlife care team that also tested positive for the virus but has been asymptomatic. Veterinarians are closely monitoring the gorillas who are all together in their habitat at the park, north of San Diego.

DETROIT — Detroit’s call center was jammed with more than 100,000 calls Monday as the city took appointments for shots at a downtown convention center, starting Wednesday. Officials planned to schedule 20,000 appointments over the next month for people 75 and older.

Police officers and bus drivers can start to get vaccinated at a downtown convention center at the end of the week.

“We do not have the capacity to answer questions from people under 75 or non-Detroiters about vaccinations in general,” chief operating officer Hakim Berry said.

AMMAN, Jordan — Jordan has received its first shipment of the Pfizer coronavirus vaccine before its vaccination drive kicks off this week.

The doses arrived at the country’s Alia airport on a Royal Jordanian Airlines flight on Monday following an earlier shipment over the weekend of Chinese drugmaker Sinopharm’s vaccine.

Officials have not said exactly how many doses arrived Monday and more shipments are expected in the coming weeks. Jordan’s health minister has said that the kingdom expects to secure enough vaccine to inoculate 20% of its 10.5 million people and that additional doses would be obtained as needed.

Jordan begins vaccinating its population on Wednesday, starting with front-line workers and vulnerable groups. More than 150,000 people have registered to receive the vaccine so far.

The kingdom has recorded more than 4,000 virus-related deaths and 308,600 confirmed cases since the start of the pandemic.

PHOENIX — Coronavirus hospitalizations in Arizona reached another new high as the state ramps up its vaccine efforts, including converting an NFL stadium into an around -the-clock vaccination site.

The Arizona Department of Health Services reported Monday that a record 4,997 people were hospitalized because of the virus. Among them, more than 1,100 were in intensive care units.

Those numbers are significantly above what the state now considered a hotspot experienced during its last surge in July.

INDIANAPOLIS — Indiana state health officials say a more contagious variant of the coronavirus that was first identified in the U.K. late last year has been found in the state.

The Indiana State Department of Health said the variant was identified through testing by the state agency’s laboratory and the Centers for Disease Control and Prevention, but Monday’s announcement included no additional information on its discovery in the state.

State Health Commissioner Kris Box said in a statement the variant “does not cause more severe infections, but it is much more easily spread.”

She said its discovery means that “it’s more important than ever” for residents to continue wearing masks and taking other precautions.

GENEVA — The World Health Organization’s chief scientist warned that even as countries start rolling out vaccination programs to stop COVID-19, there will be no chance of herd immunity this year.

Dr. Soumya Swaminathan said on Monday it was critical countries and their populations maintain strict social distancing and other virus restrictions for the foreseeable future. Countries including Britain, the US, France, Canada, Germany, Israel and the Netherlands have started inoculating millions of their citizens against the virus in recent weeks.

Dr. Bruce Aylward, an adviser to WHO’s director-general, said the U.N. health agency was hoping vaccinations in poorer countries might begin in late January or February.

He said the WHO needed the cooperation of vaccine manufacturers alongside money and logistical help to start immunizing poorer populations and aims to have a “a rollout plan” next month.

WARSAW, Poland — Poland’s health minister said Monday he is expecting the resignation of the rector of Warsaw Medical University after an inquiry showed that almost half the vaccines it has administered went to celebrities and opposition politicians instead of university hospital medics.

Health minister Adam Niedzielski said it was an intentional act by the university hospital and that the rector, Zbigniew Gaciong, should take responsibility and offer his resignation.

The university hospital was fined roughly $95,000.

The mostly elderly celebrities say they believed they were taking part in a promotion of the national inoculation program when they were vaccinated in late December — a vaccination window designated for health care employees and their families.

Niedzielski said some 30 university employees were not vaccinated thanks to the celebrities.

The celebrities whose names have been revealed by local media are strong critics of the right-wing government.

THE HAGUE, Netherlands — A Dutch municipality is planning to test all of its residents two years of age or older following a coronavirus outbreak at an elementary school that included cases of the more transmissible variant first discovered in the United Kingdom.

Lansingerland municipality’s decision to test nearly all of its 62,000 residents marks the first time such a mass test has happened in the Netherlands since the pandemic began.

The local health authority said last week that a cluster of some 75 virus cases linked to a school in the town of Bergschenhoek included 30 positive tests of the new variant.

The mass test aims to study the spread of the new variant and quell its spread in the municipality close to the port city of Rotterdam.

All elementary schools in the Netherlands are closed as part of a strict five-week lockdown that is widely expected to be extended this week.