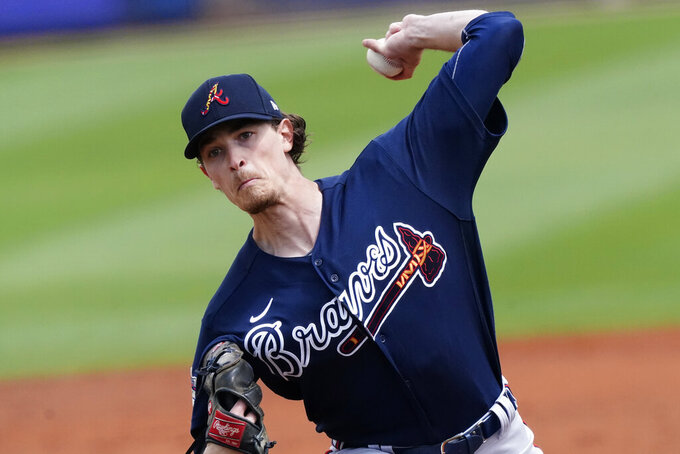 Forward Adam Gaudette, defenseman Travis Hamonic, and a member of the Canucks coaching staff are in NHL COVID-19 protocol.

Canucks games at Edmonton on Saturday, and at Winnipeg on Sunday and Tuesday, have been postponed. That’s in addition to the home game against the Calgary Flames that was postponed Wednesday.

Rescheduled dates have not been announced.

Pending test results in the coming days, it’s expected the Canucks will be able to resume their game schedule next Thursday, but the team can’t practice before Tuesday.

Washington Nationals general manager Mike Rizzo says the team has three players who have tested positive for the coronavirus and a fourth considered a “likely positive.”

The Nationals’ season-opening game against the visiting New York Mets that was scheduled for Thursday night was postponed.

Rizzo said it was not known when that game will be made up — other than that it would not be played Friday.

He did not identify any of the players involved.

Rizzo announced an initial positive test Wednesday, saying it resulted from testing done Monday while the Nationals were still in Florida.

At the time, he said four other players were considered to have been in close contact and were quarantining. Now, two of those players resulted positive after being tested Wednesday and another had an inconclusive sample that is being treated as a likely positive.

Carson-Newman has opted out of the rest of the spring football season because of the health and safety of the Division II program.

The Eagles in Jefferson City, Tennessee, had played only one game this season. They won in four overtimes last month over UVA Wise. But COVID issues with their opponent canceled a game March 20, and Carson-Newman’s own injuries and COVID issues canceled a game last weekend.

Clowney says they all worked hard over the past nine months trying to make this unprecedented spring season work. But he says now it’s time to turn their attention to the next season this fall.

Coastal Carolina’s baseball team has paused activities for the next seven days due to COVID-19 concerns within the program.

The school said Thursday that its three-game series with Appalachian State and games with UNC Wilmington on Tuesday and College of Charleston on Wednesday have been postponed.

The New York Mets season opener at Washington has been postponed because of coronavirus concerns.

The Nationals issued a statement saying “ongoing contact tracing involving members of the Nationals organization” was the reason for scrapping Thursday night's game at Nationals Park. The game has not yet been rescheduled.

Nationals general manager Mike Rizzo said Wednesday that one of the team’s players had tested positive for COVID-19 on Monday, before the team left spring training camp.

Rizzo said four other players and one staff member were following quarantine protocols after contact tracing determined they were in close contact with the person who tested positive.

Rizzo did not identify any of those involved.

The Atlanta Braves will expand capacity at Truist Park to 50% for their second homestand beginning April 23 against the Arizona Diamondbacks.

The Braves are permitting 33% capacity at their initial homestand to allow for ample social distancing, limiting the crowd to about 13,500. Those standards will be in place for the first seven home games, beginning with the April 9 opener against the Phillies.

The capacity will increase to 50%, or roughly 20,500, for at least the ensuing seven home games. The Braves have said they will review their seating policies before each homestand.

The Braves’ capacity will be among the highest in the big leagues. They will join Houston at 50%, which is only surpassed by the Texas Rangers’ plans to allow full capacity at the start of the season.

President Joe Biden has called the Rangers’ plan a mistake, joining health officials in warning of a possible fourth surge in COVID-19 cases while urging states to keep restrictions in place until more of the population is vaccinated.

That request has been largely rejected by governors in GOP-led states, including Georgia. The Braves announcement came one day after Gov. Brian Kemp signed an executive order rolling back the state’s coronavirus restrictions beginning April 8, including the ban on large gatherings.