The Latest: NHL's Canucks have 17 players in COVID protocol 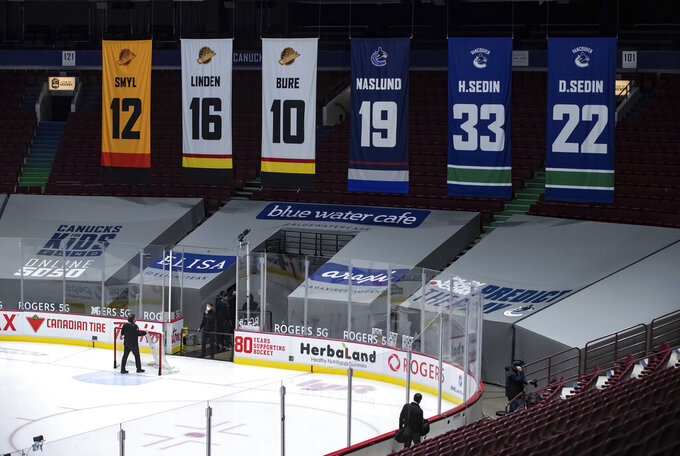 An arena worker removes the net from the ice after the Vancouver Canucks and Calgary Flames NHL hockey game was postponed due to a positive COVID-19 test result, in Vancouver, British Columbia, Wednesday, March 31, 2021. (Darryl Dyck/The Canadian Press via AP)

The Vancouver Canucks now have 17 players in the NHL COVID-19 protocol with the addition of rookie forward Nils Hoglander.

It marks the fifth straight day the Canucks’ list has grown. The 17 players in the protocol at the same time represents the most by one NHL team since the New Jersey Devils had 18 on Feb. 12.

There are 22 players listed for a third consecutive day, which remains the highest total since 24 players were listed on Feb. 16. The NHL’s one-day high is 59 players who were in the protocol on Feb. 12.

The additions of Hoglander and Halak increases the total to 190 NHL players who have spent at least one day on the COVID-19 list since the season began Jan. 13.

Dallas goalie Anton Khudobin was cleared after spending one day in the protocol. Los Angeles forward Brendan Lemieux was also cleared after a seven-day stint, which came after the Kings acquired him in a trade with the New York Rangers.

The Seattle Sounders of Major League Soccer have been given the go-ahead to have fans back at Lumen Field for the first time in over a year.

The Sounders are expecting to host approximately 7,000 fans for the first five home games. The team's MLS season opener against Minnesota United is a week from Friday (April 16).

The team says season ticket holders will get priority access to tickets.

Face masks that fit within CDC guidelines are required for all fans age two and older but can be removed while eating and drinking. All tickets will be sold in pods between one and six tickets that must be purchased together and must be used by members of the same household or permissible quarantining unit, as permitted by regional health authorities.

All tickets are electronic, No paper tickets will be permitted or printed.

Some New York Mets players have hesitated to get vaccinated against the coronavirus, causing the team to set up education efforts.

Major League Baseball and the players’ association said in a March 29 memorandum to players that COVID-19 protocols such as mask use and restrictions on movement and gathering would be relaxed once 85% of major league players and primary field staff on a team are vaccinated against the coronavirus.

Players on several teams started to get the vaccine last week during the final week of spring training, when they became eligible.

“There has been some hesitation on the part of some players, and that is why we’ve set up the education,” Mets president Sandy Alderson said Monday.

Alderson said the Mets want to get as many players vaccinated as possible.

The Jackrabbits (4-1) are ranked No. 4 in the Football Bowl Subdivision and are in a four-way tie for first place in the Missouri Valley Conference.

The game will not be rescheduled.

The Milwaukee Brewers announced Monday the team received the COVID-19 vaccine over the weekend but wouldn’t disclose what percentage of players and staffers participated.

Major League Baseball has announced it would relax protocols for teams that had 85% of their players and primary field staff vaccinated. Brewers president of baseball operations David Stearns declined to say whether the Brewers had reached that 85% threshold.

Stearns did say the Brewers who participated received the one-dose Johnson & Johnson vaccine.

The Brewers also put out a public service announcement Monday promoting COVID-19 vaccination. The release of the video coincided with the first day that Wisconsin made vaccination available to everyone 16 and older.

The video features star outfielder and 2018 NL MVP Christian Yelich as well as pitchers Freddy Peralta and Brent Suter. During a Monday Zoom session with reporters, Suter noted that he and his wife had tested positive a couple of months ago.

The NHL’s deputy commissioner says the COVID-19 outbreak on the Vancouver Canucks is concerning, but Bill Daly remains confident the team will be able to complete its schedule.

Daly said in an email to The Canadian Press the league believes the Canucks will return and conclude their 56-game schedule. He also said the league will not change its COVID protocols in the aftermath of the Canucks’ situation.

The team has had four games postponed because of the virus. As of Sunday, 16 of the 22 players on the Canucks’ active roster were on the NHL’s protocol list.

A player on the list has not necessarily tested positive.