The Latest: Nigeria urges vaccine to be available to all 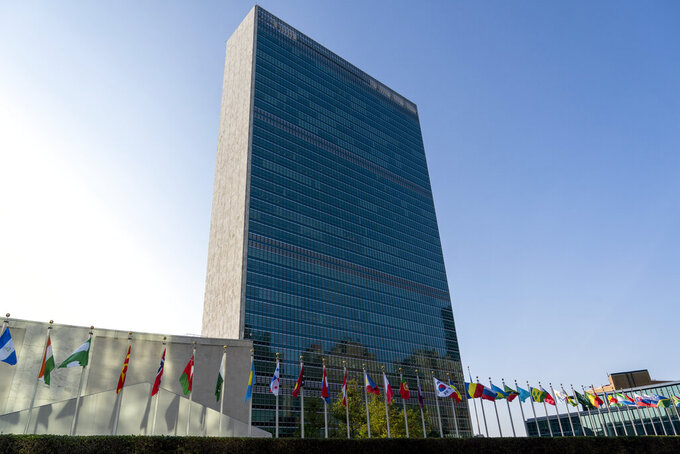 Member state flags fly outside the United Nations headquarters during the 75th session of the United Nations General Assembly, Tuesday, Sept. 22, 2020. This year's annual gathering of world leaders at U.N. headquarters will be almost entirely "virtual." Leaders have been asked to pre-record their speeches, which will be shown in the General Assembly chamber, where each of the 193 U.N. member nations are allowed to have one diplomat present. (AP Photo/Mary Altaffer)

The president of Africa’s most populous country, Nigeria, is calling for the “uninhibited supply of safe and effective coronavirus vaccines for all.”

African nations have been outspoken in seeking the equitable distribution of any COVID-19 vaccine, while watching anxiously as some of the world’s richest countries strike deals with pharmaceutical companies to secure millions of doses of potential vaccines.

President Muhammadu Buhari warns that if the United Nations can’t marshal an inclusive response to the pandemic, then it “would have failed in its core mission of giving expression, direction and solution to the yearnings of the international community.”

The U.N.’s health agency, the World Health Organization, has said Africa should receive at least 220 million doses through an international effort to develop and distribute a vaccine known as COVAX.

But Africa’s top public health official has said the continent needs at least 1.5 billion doses, enough to cover 60% of the population for “herd immunity” with the two likely required doses.

Argentine President Alberto Fernández is asking the world to think beyond creating a vaccine that will help end the coronavirus pandemic.

In his prerecorded speech to the U.N. General Assembly on Tuesday, he challenged leaders to use the health crisis as a moment of inflection to find solutions for other scourges as well.

He says the world needs to “be capable of dreaming and creating a vaccine against social injustice, environmental destruction and discrimination.”

The center-left president also urged leaders to treat an eventual COVID-19 vaccine as a global public good accessible equitably to all countries.

Fernández said the planet is facing an “historic opportunity” to unite and that international cooperation “like we once knew how to do” is the only path forward.

His call echoes that of other Latin American leaders pressing for more solidarity among nations that have largely faced the pandemic on their own.

As the world’s leaders gather remotely this year for the U.N. General Assembly, something else looks unusual: All of the speakers on the first day are men.

As the schedule goes, it will take some 50 speakers before President Zuzana Čaputová of Slovakia gives prerecorded remarks Wednesday afternoon.

According to tradition, Brazil speaks first and the United States second at the U.N. gathering. After that, the world body says, “the speaking order is based on the level of representation, preference and other criteria such as geographic balance.”

Incidentally, the U.N. has never had a female secretary-general, though a spirited campaign pressed for one ahead of the selection of current U.N. chief Antonio Guterres.

Egyptian President Abdel-Fattah el-Sissi used his speech to the U.N. General Assembly to call for reforms at the world body, including finding new ways for countries to adhere to its resolutions and expanding the Security Council to better represent African nations.

In prerecorded remarks Tuesday, the leader of the Arab world’s most populous nation also slammed the international community for continuing to “turn a blind eye” to countries that support terrorism. While not naming any nation specifically, he accused countries of sending foreign fighters to neighboring Libya under the aim of “colonial illusions.”

In the past, El-Sissi has threatened military action against Turkish-backed forces in Libya. He again threatened to intervene to protect Egypt’s western border, warning that any breach “will be fiercely faced by Egypt in defense of its people.”

Libya has been plagued by chaos since a NATO-backed uprising in 2011 toppled longtime dictator Moammar Gadhafi. The country is split west to east with its major cities controlled by rival governments.

Philippines President Rodrigo Duterte has defended his drug crackdown and dismissed criticism from human rights advocates as he addressed the U.N.’s annual gathering of world leaders for the first time.

With the coronavirus taking a toll on the Philippines, the often brash Duterte struck a somewhat conciliatory tone about the organization he’s often criticized and at times threatened to leave.

Duterte said in a prerecorded video Tuesday for the U.N. General Assembly that “the Philippines values the role that the United Nations plays in its fight against the pandemic.”

He welcomed the U.N.’s launch of a relief fund and called on the international community to ensure potential vaccines are accessible to all.

He also expressed openness to “constructive engagement” with the U.N.

Duterte often lashes out at what he decries as international meddling in Philippine domestic affairs. Western governments and human rights groups call it justifiable alarm about an anti-drug crusade that’s left over 5,700 mostly poor suspects dead.

Colombian President Iván Duque is calling on the international community to reject Venezuela’s plans to hold a legislative election in December.

In a prerecorded speech for the U.N. General Assembly on Tuesday, Duque called the vote a “manufactured orchestra” that “looks to legitimize the dictatorship.”

U.S.-backed opposition leader Juan Guaidó has called on Venezuelans not to participate in the planned election to replace National Assembly lawmakers.

The socialist Venezuelan leader is expected to address the U.N. gathering Wednesday. He is calling on the U.N. to send a mission to observe the vote.

Though about 60 U.N. members back Guaidó, the majority recognize Maduro.

France’s president says the coronavirus pandemic should shock nations into working together — and resisting a world order dominated by the U.S. and China.

In a video recording from Paris, he said, “No country will come out of this ordeal on its own."

He says the pandemic should be an “an electric shock” to encourage more multilateral action. Otherwise the world will be “collectively condemned to a pas de deux” by the U.S. and China in which everyone else is “reduced to being nothing but the sorry spectators of a collective impotence.”

Macron also warned Russia to reveal what happened to opposition leader Alexey Navalny and called for a U.N. mission to the Chinese region of Xinjiang, where Uighur Muslims have been held in camps.

“As a country that has known too well the anguish of institutional racism, South Africa supports the demands for swift actions against racism” whether it be perpetrated by companies, states or others, he said in his pre-recorded message to the U.N. General Assembly.

South Africa last year marked a quarter-century since the end of the racist system of apartheid, and Ramaphosa worked closely with Nelson Mandela, the country’s first Black president.

South Africa remains one of the most unequal countries in the world. Like many African nations, it has not escaped the problem of police brutality.

President Donald Trump says the United Nations must hold China “accountable” for failing to contain the coronavirus, which has killed about 200,000 Americans and nearly 1 million around the world.

Trump is accusing China of not sharing timely information with the world on the new disease in a taped address to the virtually gathered United Nations General Assembly.

Trump says: “The United Nations must hold China accountable for their actions.”

Trump is also using his address to tout a pair of recent international accords he helped to broker— one between Kosovo and Serbia and the other between the United Arab Emirates, Bahrain and Israel — as the United States “fulfilling our destiny as peacemaker.”

Trump has repeatedly used his appearances at the international gathering to oppose “globalization” and promote his “America First” foreign policy. His 2020 address is not different, as he admonished other nations that “only when you take care of your own citizens, will you find a true basis for cooperation."