The Latest: No. 1 Barty into Australian Open quarterfinals 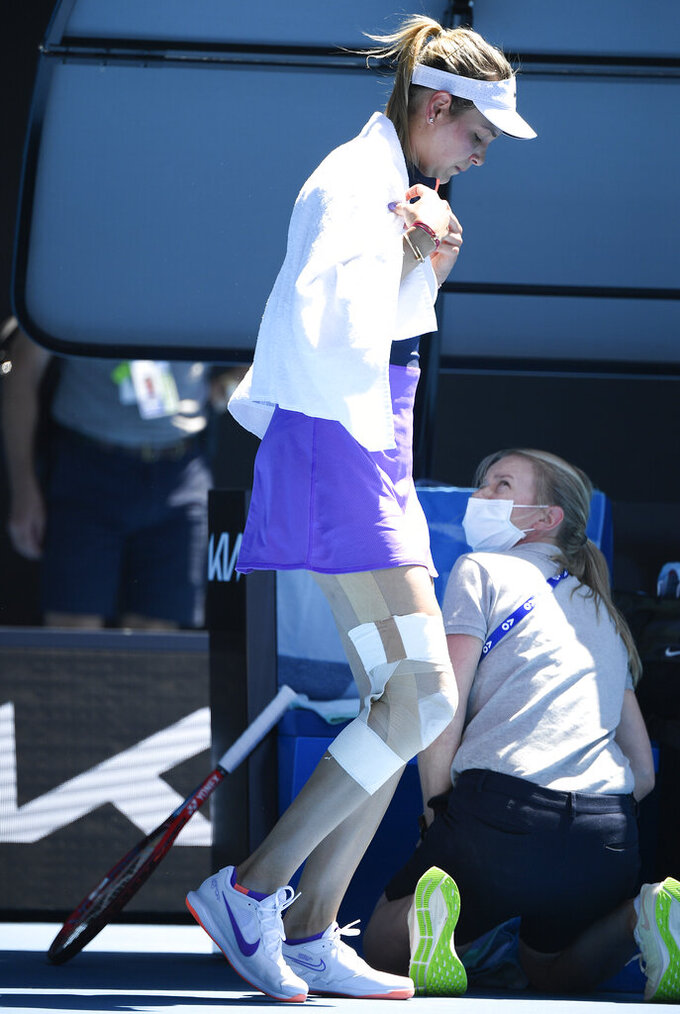 Croatia's Donna Vekic is treated by a trainer during a break in her fourth round match against United States' Jennifer Brady at the Australian Open tennis championship in Melbourne, Australia, Monday, Feb. 15, 2021.(AP Photo/Andy Brownbill) 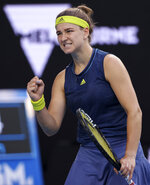 Barty lost in the semifinals last year to eventual champion Sofia Kenin and didn’t play another major tournament in 2020 after deciding to stay in Australia during the COVID-19 pandemic.

She had two match points in the eighth game of the second set but made four consecutive errors. Rogers capitalized to break and then hold and force Barty to again serve for the match.

Barty made no mistakes the second time when she held at love to close it out. Barty is aiming to be the first Australian woman since 1978 to win the Australian title. She will next play No. 25 Karolina Muchova.

Mertens won the Gippsland Trophy tuneup tournament at Melbourne Park before the Australian Open started and won the first four games against Muchova but then started to tighten up as the Czech player found her range with her big ground strokes.

Muchova is into the quarterfinals at a major for the second time.

Ninth-seeded Matteo Berrettini of Italy has pulled out of the Australian Open before his fourth-round match against Stefanos Tsitsipas because of an abdominal injury.

That allows the fifth-seeded Tsitsipas to move into the quarterfinals at Melbourne Park for the second time in three years. He will face Rafael Nadal next.

Tsitsipas lost to Nadal in the Australian Open semifinals in 2019.

Berrettini said he was told he could hurt himself worse if he tried playing Monday.

He said he was injured in the third set of his fourth-round victory over Karen Khachanov on Saturday.

Berrettini's best Grand Slam showing was reaching the semifinals of the 2019 U.S. Open.

Rafael Nadal has advanced to the Australian Open quarterfinals for the 13th time.

He was wary of Fognini and lifted his game in the second and third sets to avoid any repeat of the 2015 U.S. Open. That’s when Fognini became one of only two players who’ve rallied from two sets down to beat Nadal in five.

There was no chance this time. Nadal responded to dropping a service game in the second set by breaking straight back.

He will now play either fifth-seeded Stefanos Tsitsipas or ninth-seeded Matteo Berrettini in the last eight. It will be Nadal's 43rd Grand Slam quarterfinal. He shares the record for most men's major titles with Roger Federer. They each have 20.

Nadal's preparation for the year's first major was hampered by back stiffness.

After the win over Fognini he said: “I’m happy the back is holding better."

Casper Ruud has retired after losing the first two sets of his fourth-round match at the Australian Open and giving Andrey Rublev an easier run into an all-Russian quarterfinal against fourth-seeded Daniil Medvedev.

The No. 24-seeded Ruud had treatment for an apparent stomach muscle injury during the match on Margaret Court Arena and quit after falling behind 6-2, 7-6 (3).

The match lasted 1 hour and 17 minutes.

Rublev advanced to a fourth Grand Slam quarterfinal and joins two other Russians in the last eight. It’s the first time in the Open era that three Russian men have reached the quarterfinals at a Grand Slam tournament.

Medvedev earlier beat American Mackenzie McDonald in straight sets. Russian qualifier Aslan Karatsev has also reached the quarterfinals in the other half of the draw.

Jennifer Brady has set up an all-American quarterfinal at the Australian Open against Jessica Pegula.

The 22nd-seeded Brady made it to the round of eight at Melbourne Park for the first time by defeating No. 28 Donna Vekic of Croatia 6-1, 7-5 with the help of nine aces.

Brady went through two weeks of hard quarantine when she got to Australia last month because someone on her flight tested positive for COVID-19 upon arrival. She was not allowed to leave her hotel room at all during that time.

Brady is from Pennsylvania and played college tennis at UCLA.

She was a semifinalist at last year's U.S. Open.

Vekic's right knee was heavily taped by a trainer early in the second set, but she kept things close from there until 5-all. That's when a double-fault handed over a break at love to Brady, who then served out the victory.

Daniil Medvedev has added the Australian Open to his list of major quarterfinal appearances and stopped the run of 192nd-ranked American Mackenzie McDonald.

Medvedev was the 2019 U.S. Open runner-up and reached the semifinals there last year.

He had lost in the fourth round at Melbourne Park each of the past two years. But he compiled 29 winners to just 15 unforced errors against McDonald, who won NCAA singles and doubles titles for UCLA in 2016 but is working his way back from a torn hamstring tendon less than two years ago.

Next up will be a match against either his Russian countryman Andrey Rublev or Norway’s Casper Ruud.

Jessica Pegula has reached her first Grand Slam quarterfinal at the Australian Open by earning her first victory over an opponent ranked in the Top 10.

The 61st-ranked American, whose parents own Buffalo’s NFL and NHL franchises, beat No. 5 seed Elina Svitolina of Ukraine 6-4, 3-6, 6-3 in Rod Laver Arena.

Pegula is a 26-year-old who has won four matches at Melbourne Park over the past week after entering the tournament with a total of three Grand Slam match wins for her career.

She came into the day with an 0-6 record against Top 10 women.

In the quarterfinals, the unseeded Pegula will play No. 22 Jennifer Brady of the United States or No. 28 Donna Vekic of Croatia.

Play is underway on Day 8 as Americans Jessica Pegula, Jennifer Brady and Shelby Rogers look to advance to the quarterfinals.

Pegula, who is appearing in the second week of a major for the first time, takes on fifth-seeded Elina Svitolina. Svitolina beat Pegula in straight sets when they met last month in Abu Dhabi.

Next up at Rod Laver Arena will be Brady's fourth-round match against Donna Vekic. Brady has only had her service broken once in three matches.

Rogers has the toughest job of all when she faces top-ranked Ash Barty to begin night play at Rod Laver. Rogers' only advantage is that Barty won't have any partisan Aussie fans to cheer her on — for the third day in a row, spectators are banned on-site due to a five-day COVID-19 lockdown.