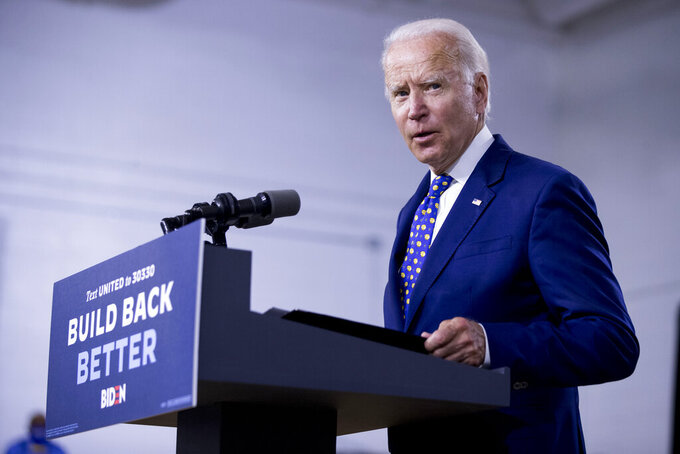 FILE - In this July 28, 2020, file photo, Democratic presidential candidate former Vice President Joe Biden speaks at a campaign event at the William "Hicks" Anderson Community Center in Wilmington, Del. Biden’s campaign is reserving $280 million in digital and television ads through the fall, nearly twice the amount Donald Trump’s team has reserved at this point. The Biden campaign announced in a Aug. 5 memo it’s reserving $220 million on television airtime and $60 million in digital ads, in contrast to the $147 million the Trump campaign has reserved, according to a review of Kantar/CMAG data by the Associated Press.(AP Photo/Andrew Harnik, File) 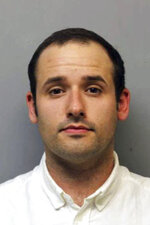 WASHINGTON (AP) — The Latest on Tuesday's elections (all times local):

Rep. Ilhan Omar of Minnesota has survived a stiff Democratic primary challenge from a well-funded opponent who tried to make an issue of her national celebrity.

Omar defeated Antone Melton-Meaux, an attorney and mediator who raised millions of dollars. The victory means Omar is nearly certain to easily win a second term in November in her solidly liberal 5th Congressional District.

Omar in 2018 became one of the first two Muslim women elected to Congress, building on a national profile that started when the onetime refugee from Somalia was elected to the Minnesota Legislature just two years earlier.

Her aggressive advocacy on liberal issues, and her eagerness to take on Donald Trump, made her even more prominent. She is known as one of the four “squad” members of progressive first-term congresswomen of color.

She’s a businesswoman who has expressed support for the far-right conspiracy theory QAnon and has been criticized for a series of racist comments.

Greene beat neurosurgeon John Cowan in a primary runoff for the open seat on Tuesday.

That’s despite several GOP officials denouncing her campaign after videos surfaced in which she expresses racist, anti-Semitic and anti-Muslim views. She has responded to the criticism by blasting “the fake news media” and “the DC swamp.”

Her victory comes in a deep-red area in northwest Georgia.

Greene will face Democrat Kevin Van Ausdal in November. Republican Rep. Tom Graves, who did not seek reelection, last won the seat with over 76% of the vote in 2018.

Lewis, a one-term congressman and former conservative radio host, had the name recognition and money to easily beat several challengers on Tuesday. Lewis has spent months on a mostly virtual campaign aimed at taking down Democratic Sen. Tina Smith.

He has been an outspoken critic of the state’s coronavirus restrictions, and he has worked to tie Smith to what he calls “heavy-handed lockdown measures.”

Smith is seeking election to her first full term since being appointed to replace Al Franken after Franken was caught up in sexual misconduct allegations. She won the Democratic primary Tuesday.

The fall campaign is shaping up as a referendum on President Donald Trump, who came close to carrying Minnesota in 2016 and is making an extra push to win the state this time.

Democratic Sen. Tina Smith has won the Democratic primary in Minnesota as she seeks to win her first full term in the seat once held by Al Franken.

Smith faced four little-known opponents on Tuesday. She was appointed to the seat in early 2018 after Franken resigned amid sexual misconduct allegations. She won an election later that year to finish the remainder of his term.

Smith is a former lieutenant governor. Jason Lewis, a one-term congressman and a former syndicated radio talk show host, was the favorite among Republicans seeking to challenge her in November. He is a staunch Trump supporter.

The fall campaign is shaping up as a referendum on President Donald Trump, who came close to carrying Minnesota in 2016 and is making an extra push to win the state this time.

Smith says she has a record of working across party lines to get things done despite being in the minority in the GOP-controlled Senate.

The 48-year-old Zuckerman, a Hinesburg farmer, says he was motivated to run by what he calls “the imperative nature of the climate crisis.” Zuckerman says he thinks Scott is “a really admirable person,” but he hasn’t been really visionary on how to address these issues.

Scott cruised to the Republican Party's nomination to seek his third, two-year term as the state’s governor.

Scott defeated four little-known Republican challengers on Tuesday to win his party’s nomination to run in the November election.

He didn’t hire staff or actively campaign during the primary, citing the coronavirus.

When announcing his reelection plans in May, Scott said, “Facing, fighting and defeating this virus — and rebuilding a stronger, more resilient economy — are my top priorities.”

On the Democratic side, there’s a competitive race for the nomination between Lt. Gov. David Zuckerman and former Education Secretary Rebecca Holcombe, who has never run for office. There are also two lesser-known Democratic candidates.

Vermont and New Hampshire are the only two states in the country where governors serve two-year terms.

Biden defeated Vermont Sen. Bernie Sanders and Hawaii Rep. Tulsi Gabbard on Tuesday’s ballot. Sanders and Gabbard dropped out of the race months ago but didn’t ask the secretary of the state’s office to remove their names from the ballot.

Biden visited Connecticut in October, when he appeared at a fundraiser hosted by Democratic Gov. Ned Lamont and his wife, Annie, at their home in Greenwich.

Biden was expected to visit the state in March for another fundraising event at a private home, but that was scrapped because of the COVID-19 pandemic.

Biden is set to be formally nominated as the Democratic presidential nominee at next week’s Democratic National Convention. On Tuesday, he announced California Sen. Kamala Harris as his running mate.

In 2016, Connecticut went for Democrat Hillary Clinton over the Republican Trump by about 13 percentage points.

Connecticut Republican Party chair J.R. Romano had criticized Secretary of the State Denise Merrill for holding a GOP primary, saying it was a waste of money for communities because Trump faced no viable competition. Merrill argued that she was following state law.

De La Fuente was endorsed by the Alliance and Reform parties and has appeared on the ballot in at least a half dozen states as a Republican. He is the onetime owner of more than two dozen car dealerships.

In 2016, Connecticut went for Democrat Hillary Clinton over the Republican Trump by about 13 percentage points.

A Republican congressional candidate in Connecticut has abruptly ended his campaign on the day of his primary election following his arrest on a domestic assault charge.

The state Republican Party says Thomas Gilmer was arrested late Monday and dropped out of the race because of “the severity of the accusations." The party had endorsed Gilmer over his primary opponent.

Wethersfield police say Gilmer was charged on a warrant with first-degree unlawful restraint and second-degree strangulation and posted a $5,000 bond.

In a statement obtained by the Hartford Courant, Gilmer said, “I cannot in good conscience move forward in this campaign while I am simultaneously forced to clear my name. And clear my name I will."

The 29-year-old Gilmer, of Madison, was competing against Justin Anderson, of East Haddam, a lieutenant colonel in the Connecticut Army National Guard who served two combat tours in Afghanistan. The winner of the race in November will face U.S. Rep. Joe Courtney, a Democrat who is favored to win reelection to represent a district spanning eastern Connecticut.