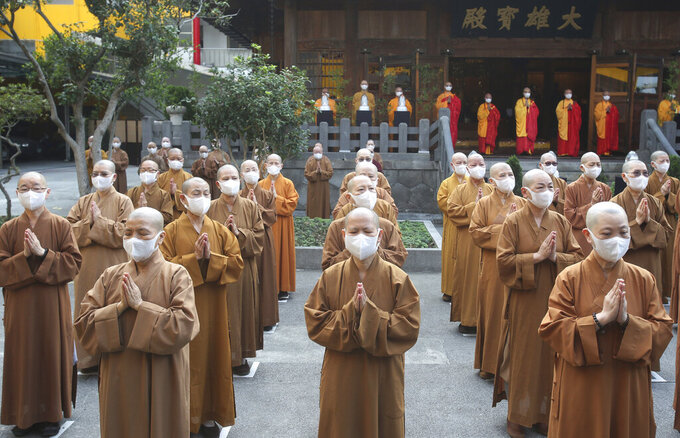 Monks and nuns pray together during Buddha's Birthday celebrations at the Lin Chi Temple in Taipei, Taiwan, Sunday, May 9, 2021. Buddha's birthday is celebrated in East Asia on the eighth day of the fourth month in the Chinese lunar calendar. (AP Photo/Chiang Ying-ying)

SALEM, Ore. — Oregon lawmakers have passed a bill to give tenants who are struggling with financial hardships due to the pandemic more time to pay past-due rent.

Currently tenants have until July, but the legislation will extend the deadline to next Feb. 28. The bill already passed the Senate and now goes to the governor.

The measure protects renters from the long-term impact of not making payments on time by barring such information from being reported to consumer credit agencies or being used in consideration of future rental applications. The measure also bars landlords from screening out applicants based on pandemic-era evictions.

In March, more than 17% of Oregon renters in a U.S. Census survey reported being behind on rent payments.

— A jumbo pop-up hospital treating COVID-19 patients in hard-hit Mumbai has more than 2,000 beds, most of them full

— Mexico says Russia is having production problems with its Sputnik V vaccine; Russia denies the report.

— Volunteers at Hindu temples, Muslim groups and Sikh relief organizations in US mobilize to support India during its virus surge

In his announcement Tuesday, the governor cited the widespread access to coronavirus vaccines for adults across the state.

McMaster’s statement says that “it goes against all logic to continue to force our children — especially our youngest children — to wear masks against their parents’ wishes.”

The order also bars state and local government agencies from requiring people to show proof of vaccination in order to receive government services or access public buildings and facilities.

The governor’s order also limits local governments from issuing mask ordinances based on his prior emergency declarations related to the pandemic. Those governments will have to find justification for such mask rules within their own ordinances.

SALEM, Ore. — Oregon’s government has set vaccination targets that officials hope will lead to the reopening of the state’s economy.

Gov. Kate Brown said Tuesday most statewide pandemic restrictions will be lifted when 70% of Oregon’s residents 16 and older get the first coronavirus vaccine dose. In addition, individual counties can move into the “lower risk” category for restrictions once 65% of the area’s eligible population is vaccinated.

Brown cautions that Oregon may continue to require the use of masks and physical distancing.

HARTFORD, Conn. — Connecticut education and health officials are working to organize clinics that will give children between 12 and 15 years of age access to Pfizer’s coronavirus vaccine as soon as the federal government gives final approval for that age group.

The Department of Education said Tuesday that clinics have already been held at schools in more than 30 districts for youngers 16 to 18 year old.

Clinics are now being planned that could be expanded to vaccinate younger students. But the department says some local districts may opt instead for bus trips to mass vaccination sites or work with local providers to schedule vaccinations.

MONTPELIER, Vt. — Vermont says it is ready to begin providing the Pfizer coronavirus vaccine to adolescents between the ages of 12 to 15 within days of its use being authorized by the federal government,.

Vermont's state health commission said Tuesday that vaccinations could begin being administered to adolescents soon after approval, which is widely expected to come Wednesday.

Vaccination clinics are being planned for more than 40 schools, and adolescents will be able to get the vaccine at any location that offers the Pfizer vaccine. There are about 27,000 Vermonters in the 12-15 age group.

TORONTO — Canada’s largest province says it will stop giving out first doses of the Oxford-AstraZeneca vaccine due to concerns over blood clots.

Ontario Chief Medical Officer of Health Dr. David Williams says the decision has been made out of an abundance of caution because of increased instances of a rare blood clotting disorder linked to the shot.

AstraZeneca is restricted in some European countries because of a potential link to extremely rare blood clots. In Canada, at least 12 cases have been confirmed out of more than two million doses given and three women have died.

Ontario says it has 49,280 doses of the shot remaining in the province out of over 707,000 received. Health officials are awaiting results of a clinical trial in the United Kingdom looking at giving a different vaccine for the second dose. That would allow people who got AstraZeneca first to be given Pfizer or Moderna for their second dose.

LAS VEGAS -- Health officials in Nevada have said Clark County might not be vaccinating people fast enough to reach the state’s goal to remove capacity limits and social distancing requirements next month.

Southern Nevada Health District Chief Health Officer Dr. Fermin Leguen said about 50% of eligible residents 16 and older, or about 919,000 people, had received at least one shot of COVID-19 vaccines as of Friday.

Democratic Gov. Steve Sisolak set a state goal to reduce restrictions by June 1. But Clark County, which includes Las Vegas, set a threshold to vaccinate 60% of its population, or more than a million people, before fully reopening.

The Department of Health Services made its announcement a day after the U.S. Food and Drug Administration gave emergency-use authorization for the administration of Pfizer’s vaccine to the 12 to 15 age group.

A federal advisory committee and the Centers for Disease Control and Prevention are expected to follow suit on Wednesday. Arizona has state-run vaccination sites in metro Phoenix, Tucson, Yuma and Flagstaff.

PARIS — French Health Minister Olivier Veran, a neurologist, has administrated vaccine shots to several people himself in the Paris’ southern suburb of Montrouge, as France seeks to speed up its COVID-19 vaccination program.

On Tuesday, authorities allowed all people over 18 to get access to vaccines if some appointments remain available for the following day. All people over 50 and those with specific health issues can book in advance.

As the country is gradually reopening, the French government expect 20 million people, or 38% of the adult population, will have received at least one dose at mid-May. At the current speed, between 2.5 million and 3 million people are vaccinated every week.

Terrasses of cafes and restaurants, museums and non essential shops are set to reopen on May 19.

Numbers of daily infections have started decreasing in recent weeks. Over 4,700 COVID-19 patients were still in intensive care units on Tuesday.

BANGKOK — Buddhist monks in Thailand held a national prayer event Tuesday evening to boost the nation’s morale as the country struggles to curb a surge of COVID-19 cases.

The government’s National Office of Buddhism ordered all temples nationwide to hold the prayer event, and issued a handbook with several pages of ceremonial chants used to banish danger and disease during Buddha’s era. The office said it was taking action because the country’s third wave of the coronavirus was affecting the minds and bodies of monks and other Buddhists,

Thailand’s Supreme Patriarch, Somdet Phra Maha Muniwong — head of the country’s Buddhist clergy — led a prayer session lasting about an hour from his temple in the Thai capital Bangkok, which was broadcast live by the government’s television station. The words to the chants were shown onscreen for viewers who want to pray along from home.

The third wave of the coronavirus, which is deemed to have begun on April 1, has accounted for 58,061 of Thailand’s total cases, and 358 of its total deaths.

LONG BEACH, Calif. -- The city of Long Beach, California, is offering tickets to the Aquarium of the Pacific as an incentive to overcome resistance to COVID-19 vaccinations.

The Aquarium of the Pacific is one of the Los Angeles region’s major attractions, drawing about 1.7 million visitors annually.

Long Beach will give two aquarium tickets to anyone receiving their first dose of Pfizer or Moderna vaccine or a single dose of the Johnson & Johnson vaccine at any city-run vaccination site, the city said Tuesday. The offer runs through May 15.

“While we have made tremendous strides in vaccinating 60% of eligible Long Beach residents and 96% of our seniors, we know that vaccine hesitancy for some is real,” Mayor Robert Garcia said in a statement. “We are going to do everything we can to encourage folks to get vaccinated, and that includes incentives.”

NEW YORK — Vaccination rates for retirement-age Americans have been lowest in states in the South, according to a new government study.

The researchers found that, overall, 79% of people age 65 and older had received at least one dose of vaccine. But vaccination rates were more than 99% of seniors in New Hampshire, and as low as 69% in Alabama, Mississippi and West Virginia.

He says we can have a better, “one-dose” summer, as long as restrictions remain in place for case numbers to go down and more than 75% of Canadians get their first dose. He says a one-dose summer sets us up for a “two-dose fall,” when Canadians will be able to talk about going back to school, back to work, and back to more normality.

OMAHA, Neb. — The pace of coronavirus vaccinations in Nebraska has slowed significantly over the past month.

Health officials said 49.9% of the state’s population over the age of 16 has now been vaccinated and 1.55 million doses have been administered statewide since December. But demand for the shots has weakened across the state.