The Latest: Pacers' Oladipo to sit out restart of season 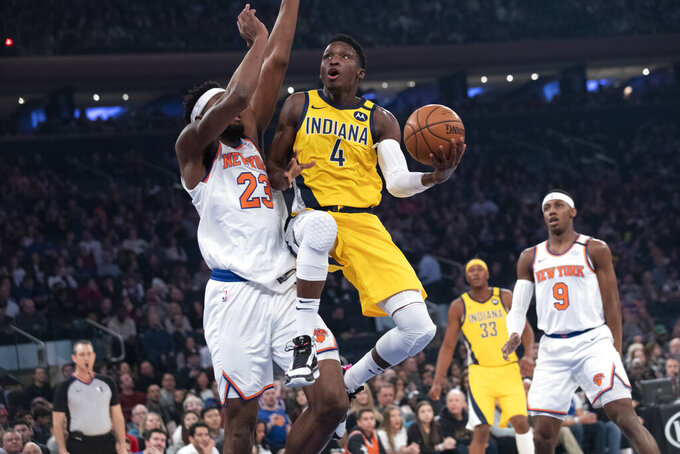 FILER - In this Feb. 21, 2020, file photo, Indiana Pacers guard Victor Oladipo (4) goes to the basket against New York Knicks center Mitchell Robinson (23) in the first half of an NBA basketball game at Madison Square Garden in New York. The Pacers will finish this season without Oladipo after the two-time All-Star decided to sit out because of the risk of re-injuring his right knee. (AP Photo/Mary Altaffer)

The Indiana Pacers will finish this season without Victor Oladipo after the two-time All-Star decided to sit out because of the risk of re-injuring his right knee.

Earlier this week, Oladipo told reporters he was still debating whether to join his teammates in Orlando.

“We totally respect and understand Victor’s decision to not play in the restart of the NBA’s season,” Pacers president of basketball operations Kevin Pritchard said Friday in a statement. “The first priority for our players is, and always will be, their health, whether that be physical or mental health. Victor has looked great in workouts, but the timing of the restart and lack of 5-on-5 activity makes it difficult to for him to commit to playing at the high level he expects with regards to further injury.”

On Wednesday, coach Nate McMillan said he anticipated having Oladipo in the NBA’s “bubble,” working out with his teammates and a final decision would be made at a later date.

But Oladipo didn’t wait that long.

After spending almost a full year rehabbing his right quadriceps tendon, the guard returned to the court Jan. 29.

Oladipo played in 13 games before the season was suspended by the COVID-19 pandemic. He was averaging 13.8 points, 3.2 rebounds and 3.0 assists while shooting 39.1%, and appeared to be rounding into form.

His contract expires after next season.

“His future health is the No. 1 priority and we look forward to having him back at full strength for the 2020-21 season,” Pritchard said. “This is not a unique situation for our team, playing without key players like Victor and Jeremy Lamb. This team has shown great resolve in responding to adversity and we fully expect this will be no different. We remain excited about what they can accomplish in Orlando “

Diamondbacks closer Archie Bradley said both of his parents and his brother all tested positive for COVID-19 back in March. All three of them have recovered.

Bradley said his mom was asymptomatic while his brother was only sick a few days. But his dad’s case was serious and he was in the hospital for 10 days.

“My dad’s like my best friend so I was definitely concerned,” Bradley said. “But I prayed about it, felt good about it and ultimately my dad’s a fighter and so is my family. We were lucky.”

Bradley was not living with his family and did not test positive for the virus. He threw a simulated inning on Friday during the team’s first workout at Chase Field.

Star catcher Buster Posey was away from camp on the first day to handle a personal issue, Kapler said. Posey could be back by Saturday.

“He has tested negative, I just don’t want that to be a concern at all,” Kapler said. “I don’t expect Buster to be far behind.”

A person with knowledge of the situation says that the Miami Heat have closed their training facility after a second player tested positive for coronavirus.

The Heat will have players at the arena over the coming days to satisfy their NBA-mandated testing requirements but will not reopen the gym for individual workouts before leaving for the Disney complex near Orlando on Wednesday, said the person who spoke to The Associated Press on condition of anonymity because no details were announced.

The second player’s identity was not released by the team. Heat guard Derrick Jones Jr. tested positive for coronavirus last week and has been working through the NBA protocols on a return-to-play plan.

Toronto FC pushed back its departure to Florida for the MLS is Back Tournament to Saturday, saying more time is needed to complete pre-travel COVID-19 testing.

The MLS team had been scheduled to leave by charter Friday. Toronto opens the World Cup-style tournament on July 10 against D.C. United.

The New York Red Bulls also delayed their Friday departure, saying a staff member had produced an inconclusive COVID-19 test result. The Red Bulls said they would reschedule their flight once all the test results were confirmed.

Six players from FC Dallas and one from Columbus Crew SC have already tested positive in the Sunshine State. They have been isolated and are receiving care while the other members of their delegations are in quarantine pending more testing.

Major League Soccer had required teams to arrive in Florida no later than a week before their first game at the tournament, which runs July 8 to Aug. 11 at Disney’s Wide World of Sport Complex in the Orlando area. But issues with test results have caused several delays.

Kansas has suspended its voluntary football workouts because of an increase in positive COVID-19 cases in the program.

The school says it has tested 164 athletes and recorded 16 positives, including 12 football players. It says 45 athletes are currently in quarantine across all sports.

“When we welcomed our young men back to campus a couple of weeks ago for voluntary workouts, even with the policies and procedures in place to try and protect them from becoming infected with the virus, events outside of our control has made the decision to pause these workouts necessary,” coach Les Miles said in a statement.

The school says the other teams with athletes back on campus will continue their voluntary workouts.

New Jersey’s premier thoroughbred track is scrambling to follow capacity limits set by the state as it prepares for its opening night of racing.

Monmouth Park is scheduled to present a six-race card Friday night. Track officials said in an afternoon statement that no more than 500 people would be allowed in certain areas, but added that information on a final capacity number would be released later in the day.

The Asbury Park Press reported the track had submitted a plan to the state to allow roughly 16,000 people in the track’s outdoor areas, but the plan was not approved. The track has hosted as many as 60,000 for the Haskell Stakes, its signature event.

Monmouth Park’s sports book will open but be restricted to 25% of normal capacity. All visitors to the track or sports book will be required to wear a mask and be given a brief health questionnaire.

A third Washington Nationals player has decided to opt out of playing this Major League Baseball season because of concerns about the coronavirus.

Manager Dave Martinez said depth catcher Welington Castillo was uncomfortable playing because he has young children. He joins first baseman Ryan Zimmerman and pitcher Joe Ross among those deciding not to play for the defending World Series champions.

The 33-year-old Castillo played last season for the Chicago White Sox and then joined the Nationals as a backup option.

Indians outfielder Delino DeShields Jr. has tested positive for the coronavirus and is being quarantined from his teammates.

Antonetti said DeShields is doing well and has only had “very mild symptoms” at this point. He’ll have to twice test negative before he’s permitted to re-join the ballclub.

The 27-year-old DeShields spent the past five seasons with Texas. He was acquired by the Indians in the offseason trade that sent two-time Cy Young Award winner Corey Kluber to the Rangers.

The Sept. 12 football game between Lafayette College and Navy has been canceled.

Lafayette informed the Naval Academy that it cannot bring its football team back to campus in time to meet medical advisory guidelines established by the FBS.

Navy is seeking to fill the date with another opponent.

The Green Bay Packers are optimistic they will have fans at Lambeau Field this season, but they note that seating capacity would be cut significantly and spectators must wear face coverings.

The NFL club also acknowledges the “possibility that Lambeau Field will be unable to host fans for games this season" because of the pandemic. Training camps across the league are to begin in mid-July.

Those who opt out can have their 2020 payment refunded in full or credited to 2021.

The Latvian soccer federation says its national team will play a postponed friendly at Montenegro on Oct. 7.

The match in Podgorica was originally scheduled to be played March 26 but was called off because of the coronavirus pandemic.

Soccer has resumed around much of Europe in empty stadiums. The Champions League is scheduled to be completed in August at a mini-tournament in Portugal.