The Latest: Pitino calls for delayed start to basketball 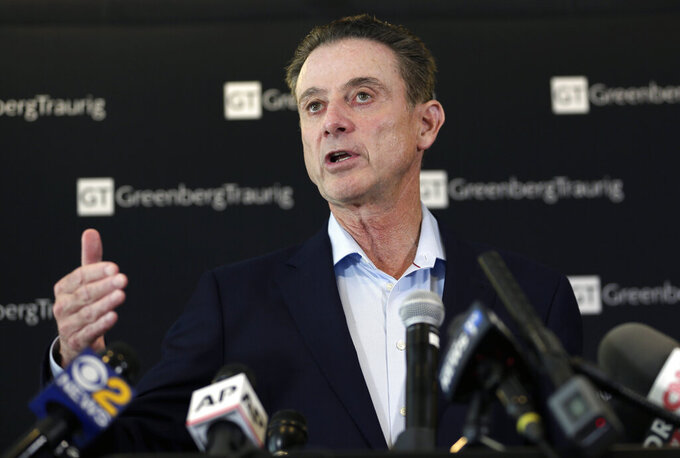 FILE - In this Feb. 21, 2018, file photo, former Louisville basketball coach Rick Pitino appears during a news conference in New York. Hall of Famer Pitino was named basketball coach at Iona College on Saturday, March 14, 2020. Pitino coached at Louisville from 2001-17 before being fired in a pay-for-play scandal and had been coaching in Greece. He replaces Tim Cluess, who resigned Friday after 10 years and six NCAA Tournament appearances due to health concerns. (AP Photo/Seth Wenig, File)

Iona coach Rick Pitino is calling for a delayed start to the college basketball season as COVID-19 cases rise across the country.

“Save the Season,” Pitino tweeted on Saturday. “Move the start back. Play league schedule and have May Madness. Spiking and protocols make it impossible to play right now.”

NCAA vice president of basketball Dan Gavitt said this week that he’s fully confident there will be a season, but an increase in coronavirus cases have led to multiple cancelations in football and caused uncertainty about basketball.

Many schools are still trying to fill out schedules with the season set to start on Nov. 25.

Germany’s game against Ukraine in the Nations League has been given the go-ahead to proceed by local health authorities.

Saturday's game in Leipzig had been in doubt after four Ukraine players and one staff member tested positive for the coronavirus.

But further tests among the rest of the squad all produced negative results a few hours before kickoff.

Germany team doctor Tim Meyer said, “We trust the health authorities’ thorough work." He said the risk of infection is “much lower” during the game than around it.

The doctor also cited the security of the “double negative test results.”

No fans will be in attendance.

Milan says Pioli is showing no symptoms and that the 55-year-old coach has gone into isolation at home.

The Serie A leaders canceled training and will resume Monday “subject to the checks set out in the federal protocol.”

The club says tests on the rest of the team and staff have come back negative.

Milan is scheduled to play Napoli on Nov. 22 in its first match after the international break.

Pioli’s side has two more points than second-placed Sassuolo.

It says Brozovic has been isolated from the rest of the team which is to play Sweden in Stockholm on Saturday in a Nations League game.

Defender Domagoj Vida was pulled out of Croatia’s friendly match against Turkey on Wednesday after a positive test.