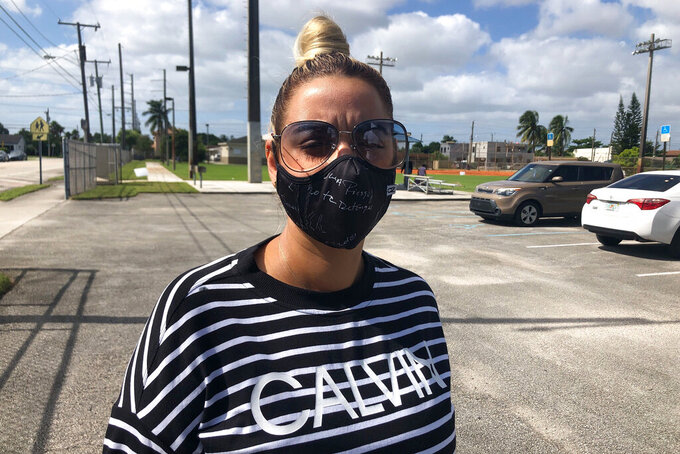 Yaima Mesa speaks about voting Tuesday, Nov. 3, 2020 in in Hialeah, Fla. Mesa said she knows many fellow Cubans support Trump and she says she does feel the economy had been in good shape before the pandemic. (AP Photo/Adriana Gomez Licon)

The Latest on the 2020 general election (all times local):

President Donald Trump has won Florida’s 29 electoral votes, defeating Democrat Joe Biden in a prized battleground state crucial to the Republican’s bid for another four years in the White House.

Trump withstood an aggressive challenge by the former vice president, who questioned the president’s handling of the coronavirus pandemic, his rush to appoint a new justice on the U.S. Supreme Court and how he has addressed social unrest after high-profile police killings of Black people.

Democrats had hoped to boost turnout among their ranks with a mail-in voting push, but it was not enough. In the end, Trump prevailed with the help of a loyal base, particularly in the state’s rural reaches.

Florida voters have approved a measure raising the state’s minimum wage to $15 an hour over the next six years, which advocates say will lift the pay for hundreds of thousands of workers in the state’s service-heavy economy.

A supermajority of Florida voters approved the amendment to the Florida Constitution that will raise Florida’s minimum wage from the current $8.56 an hour to $15 an hour by 2026.

Although Florida’s current minimum wage is higher than the federal minimum wage of $7.25 an hour, supporters of Amendment 2 had said it is impossible to live on that wage given the state’s cost of living.

Opponents of Amendment 2 said it would stifle growth as Florida’s battered tourism economy recovers from the impact of the new coronavirus.

Gimenez, a former firefighter, prevailed over Debbie Mucarsel-Powell in a district that stretches from the Miami suburbs to Key West. The seat has swung back and forth between Democrats and Republicans for several elections.

Gimenez has made restoring the economy amid the coronavirus pandemic one of his top campaign issues. Mucarsel-Powell, who is originally from Ecuador, also stressed recovery from the pandemic as a major priority.

Broward County Sheriff Gregory Tony, who was appointed to the post in the aftermath of the Parkland high school massacre, won election Tuesday to a full term.

The 41-year-old Democrat easily defeated Republican H. Wayne Clark in the heavily Democratic county. Tony, a former Republican, was appointed to the position in 2019 by Republican Gov. Ron DeSantis when he fired then-Sheriff Scott Israel for his actions and those of his deputies during and after the Feb. 14, 2018, mass shooting at Marjory Stoneman Douglas High School. It left 17 dead.

Tony had defeated Israel in August’s Democratic primary after a nasty campaign where it became public that Tony had killed another teenager when he was 14. That shooting that had been ruled self-defense, but Gregory had not disclosed it when applying for law enforcement jobs.

Tony has been an aggressive disciplinarian. According to the South Florida Sun-Sentinel, he has fired 14 deputies and three jailers, some for excessive force. He recently fired two jail administrators over the treatment of an inmate as she gave birth in jail.

Cohn is a former television journalist. The district runs from just east of Tampa to just west of Orlando.

Cammack, 32, defeated Democrat Adam Christensen in the firmly conservative congressional district that stretches from Ocala to just south of Jacksonville in north Florida.

Cammack won the August primary with 25% of the vote in a 10-way race.

Christensen, 26, owns a company that tests botanical oils for purity.

Republican U.S. Rep. Brian Mast has won reelection to his Florida seat for a third term.

Mast, 40, served in the Army as a combat engineer and lost both legs when he stepped on a bomb in Afghanistan in 2010. After his military discharge, Mast worked as an explosives instructor for the Department of Homeland Security before he was elected in 2016.

He is a supporter of President Donald Trump and is a member of the House foreign affairs and transportation committees.

Loomer, 27, is a rising celebrity on the far right and raised more than $2 million compared with Frankel’s $1.4 million. She has been barred from Facebook, Twitter and other social media sites because of her anti-Muslim speech and calls herself “the most banned woman in the world.”

Attendees at Loomer’s victory party after the August primary included Roger Stone, whose prison sentence for lying to Congress was recently commuted by Trump.

Frankel, 72, is a political fixture in Palm Beach County, serving in various posts for decades.

Crist was a Republican until his final year as governor, but left the party in 2010 as an independent before becoming a Democrat in 2012.

Republicans once again made Murphy’s seat a target after she defeated 12-term Republican John Mica in 2016 and was able to fend off the GOP challenge in the central Florida district that includes part of Orlando.

Murphy sits on the powerful Ways and Means Committee and its subcommittees on trade and worker and family support. She was born in Vietnam and came to the United States as an infant when her family fled the country.

Before being elected to Congress, she was a national security adviser at the Pentagon, taught at universities and worked in her family business. She went unchallenged in the August primary.

Valentin, a medical doctor, won a three-way GOP primary by 654 votes after investing about $200,000 of his own money in the race.

Keith Montgomery said he cast a ballot for President Donald Trump. The 53-year-old Clearwater man also voted for Trump in 2016.

“I voted Republican," Montgomery said. "I don’t like defunding the police at all. I think that’s crazy and anybody who suggested that is crazy.”

Montgomery, who is disabled, said he’s watched Trump’s rallies on most nights.

“He’s honest,” Montgomery said. "He’s to the point and honest.”

Montgomery said he trusts Trump with the pandemic response.

Moritz Linn, a 19-year-old student at University of California, Berkeley, said he traveled from the West Coast to vote in Miami-Dade.

Linn voted for President Donald Trump and said he liked the president’s governing style and record as a businessman.

“He is brutally honest," Linn said. “I like the fact that he will say whatever he is thinking, and he would do whatever he thinks is best, and he doesn’t care whether he is going to get bashed on for four more years or whether people are going to slander his name.”

Linn said Trump took the right measures when he shut the country down earlier this year to curb the spread of the coronavirus. Linn fell ill with COVID-19 over the summer but said he did not feel very sick except for a bit of shortness of breath.

Lifelong Republican Todd Foote voted for President Donald Trump in 2016, but the 46-year-old Parkland father of four said he will never vote Republican again after the 2018 shooting that killed 17 at Marjory Stoneman Douglas High School while his son was a student.

“I went straight down the ticket red my entire life," Foote said. "It wasn’t until the shooting. It’s sad that it takes an event like this to revisit how you see the world.”

Foote said his son was a freshman at the time and heard the bullets from the biology building next door. Five of his closest friends were killed. Foote said it changed the way he voted indelibly. Gun rights was never a voting issue for Foote before, now it’s his top priority. He’s even become active in local and national groups that support gun control legislation.

“Something as simple as background checks, it just make me sick," Foote said. "It made me decide this person (Trump), this party refuses to deal with these mass shootings in these kids’ schools.”

The retired travel agent, who was born in Cuba, voted at a precinct in the Miami suburb of Hialeah on Tuesday morning.

“He is direct. He is a straight shooter,” Cabrera said. “He has done a good job with the economy.”

Nia Casado said she cast a vote for Joe Biden because President Donald Trump is dividing the nation and has to go.

“He’s just a terrible person," Casado, 24, said of Trump. “He gives everyone the impression they can do whatever they want.”

Casado works at a COVID-19 testing facility and cast her vote Tuesday in Fort Lauderdale.

“Having Trump in office in general is just dividing more people. We need to get him out if we want to come together.”

“We’ve never had a president who just approved of discrimination and racism against people,” Castillo said.

Castillo opted for a mail-in ballot, which she turned in by hand in September instead of relying on the U.S. Postal Service.

She also cast her vote for Biden because of his stance on healthcare, adding she doesn’t want her 89-year-old mother to lose health benefits.

“I know we need a change in this country,” she said.

Florida voter Mervat Harry said she’s planning to vote for President Trump because she believes he’s in best position to lead the nation for the next four years.

The 57-year-old Tarpon Springs resident, who was born in Egypt and lived in Sudan before moving to the United States, said she planned to cast her vote on Election Day. She is concerned about the country moving toward socialism.

“I know the meaning of socialism,” the former substitute teacher said.

Kickstarting the economy in the midst of a pandemic is also a concern, and she said she believes the nation will flourish under another Trump presidency.

“We need more jobs, we need people to go back to work,” said Harry.

Keegan Connolly, a 25-year-old registered Democrat from Tallahassee, said he cast his ballot during early voting on Friday for Joe Biden. Connolly said he trusts Biden to surround himself with the right people.

“Trump has been so corrosive to the presidency and to his ability to conduct foreign policy and maintain stable relationships both here and abroad, Connolly, a researcher at a non-profit said while explaining why he voted for Biden. “I feel he’s just more level-headed.”

Besides the presidential race, 27 congressional seats are at stake in Florida. Neither of the state’s two senate seats are up for election this year.

Florida residents will also get to vote on six state constitutional amendments, including an increase on minimum wage.