The Latest: S Korea begins stronger limits in some areas 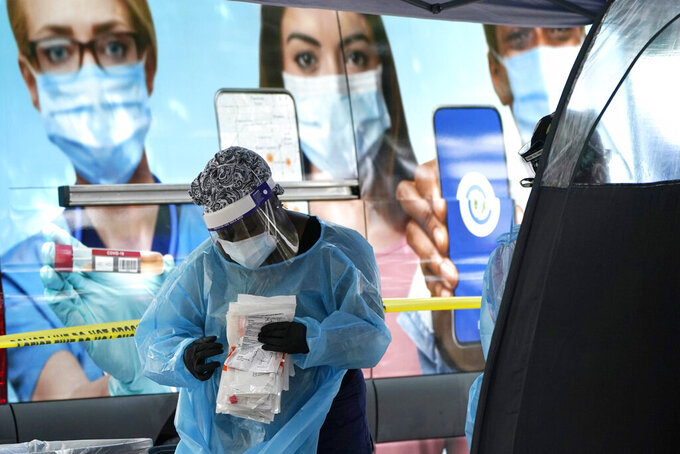 A health care worker works at a walk-up COVID-19 testing site, Wednesday, Nov. 18, 2020, in Miami. Florida health officials have reported a steady increase in the number of new coronavirus cases each day over the past month and a half, though the numbers are no where near the peak in July. (AP Photo/Lynne Sladky)

The 343 new cases announced Thursday raised the country’s case total to 29,654 for the pandemic, with 498 deaths from COVID-19.

On Thursday, elevated physical distancing rules took effective in the greater Seoul area, the southern city of Gwangju and some parts of Gangwon province. In those areas, no more than 100 people may attend rallies, concerts and other events, while sporting events and religious services are limited to 30-50% capacity. Dancing at night clubs and drinking at karaoke rooms are prohibited.

— Health experts say masks are useful tool for arresting spread of the coronavirus. Studies show they help in multiple ways and work best when everyone wears one.

— Athletes at the postponed Tokyo Olympics won’t have the luxury of hanging around once they’ve wrapped up their event. No late-night parties or nights on the town.

WELLINGTON, New Zealand — The small Pacific nation of Samoa is reporting its first positive test for the coronavirus, although officials say a second test on the same patient came back negative.

Samoa was among a dwindling handful of nations to have not reported a single case of the virus.

According to the Samoa Observer, officials say the patient is a sailor who has been in quarantine since flying in from New Zealand on Friday. The sailor tested positive four days after arriving, but a second test Thursday was negative.

The Cabinet was to meet to discuss the situation.

DENVER — Publics schools in Denver will go to fully remote learning for all grades for the rest of the semester as the coronavirus surges.

Officials said Wednesday that remote learning will begin for more than 90,000 students in Colorado’s largest school district on Monday and run through the end of winter break. The district’s decision also applies to special education students.

ST. PETERSBURG, Fla. — Five Florida mayors are expressing concern about the rising number of coronavirus cases in the state, and are urging Gov. Ron DeSantis to change his approach to the pandemic.

Following a months-long decline from a huge summer spike in coronavirus infections, Florida has seen a mid-autumn climb in COVID-19 cases and hospitalizations. Still, the governor has resisted a return to statewide restrictions in place earlier in the year.

TOPEKA, Kan. — Kansas Gov. Laura Kelly has issued a new mask mandate in hopes of lessening the spread of the coronavirus after the state again reported another record seven-day increase in new cases.

State law allows Kansas’ 105 counties to opt out of the order. Most did when Kelly issued a similar order in July. But the state’s rolling seven-day average for new coronavirus cases was more than nine times higher Wednesday than it was than when her first order took effect.

Kelly’s order takes effect Nov. 25, the day before Thanksgiving, and only in counties that don’t yet have their own mask mandates. That is a majority of the state's counties.

The governor says she is giving counties a week to work out their own mask rules.

WASHINGTON — Health and Human Services Secretary Alex Azar is trying to tamp down concerns the stalled transition of power to President-Elect Joe Biden will scramble the government’s efforts to distribute the COVID-19 vaccine to Americans.

At a vaccine news briefing Wednesday, Azar says “in the event” of a transition, the vast majority of the HHS and Pentagon officials working on vaccine distribution are all career government employees and “there is really just total continuity that would occur.”

The Biden campaign has raised concerns that President Donald Trump’s refusal to concede defeat will only add to the suffering as the coronavirus spreads in many parts of the country.

RICHMOND, Va. — Gov. Ralph Northam on Wednesday urged Virginians to stay home for the Thanksgiving holiday, saying it would be “an act of love” to help keep people safe amid steadily rising coronavirus cases.

If people must get together, Northam said, they should keep gatherings small and celebrate outside.

The Democratic governor’s comments come a few days after he announced substantial new statewide restrictions on gatherings and certain businesses in an effort to slow rising COVID-19 cases and hospitalizations.

The state’s cap on gatherings will be reduced from 250 people to 25, the mask requirement will be applied to younger children, the number of spectators allowed at athletic events will be reduced, and alcohol sales will be prohibited at dining and drinking establishments after 10 p.m.

In Virginia, case counts have been increasing with particular intensity in the state’s southwest, where cases were sparse early in the pandemic.

NASHVILLE, Tenn. — In western Tennessee, The Jackson Sun newspaper reported that a key hospital in Madison County was no longer accepting patient transfers due to a rise in coronavirus patients.

Calling it a “sobering day,” West Tennessee Healthcare CEO James Ross said the hospital, which serves as the health care hub for the region, typically accepts 50 to 60 ambulance transfers outside of the county a day.

As of Wednesday, the hospital had reported 573 patients, approaching its maximum 642-bed capacity. More than 100 patients are being treated for COVID-19.

Tennessee has seen just over 4,000 COVID-19 related deaths to date, according to researchers from Johns Hopkins University in Baltimore. That death count is the 19th highest in the country overall and the 27th highest per capita at 59.0 deaths per 100,000 people.

The city has said schools would close if the coronavirus positivity rate reached 3% citywide over a seven-day period. As the rate neared that point last week, de Blasio advised parents to prepare for a possible shutdown within days.

The city’s more than 1 million public school students will be taught entirely online. As of the end of October, only about 25% of students had gone to class in school this fall, far fewer than officials had expected.

More than 2,300 students or staff at public schools had tested positive since the start of the school year.

The Louisiana Department of Health added another 8,900 cases on Wednesday, pushing the confirmed total to nearly 201,000.

There have been more than 5,900 confirmed deaths from the virus.

AMMAN, Jordan — Jordan has reported 7,933 new cases of the coronavirus, the highest daily amount since the start of the pandemic.

The numbers were pushed higher by an outbreak at a garment factory in southern Jordan, where 1,623 foreign workers tested positive for the virus.

Health Minister Nathir Obeidat says a “procedure was taken to isolate the factory.”

Jordan has reported a total of 163,926 confirmed cases. Obeidat says 60 more people have died, raising the confirmed death toll to 1,969.

The plan will shut down indoor dining at bars and restaurants, close gyms and fitness centers, and put organized youth sports on hold for four weeks. Bars and restaurants will still be allowed to offer takeout, according to a person with knowledge of the governor’s plan. The person spoke to The Associated Press on condition of anonymity because the person was not authorized to speak ahead of the governor’s Wednesday night announcement.

In a call with reporters Tuesday, Walz said the state is trying to ease the strain on hospitals. He said restrictions would be targeted and based on data.

There were 5,102 cases reported in Minnesota on Wednesday, along with 67 deaths. The state totals stand at more than 242,000 cases and 3,010 confirmed deaths.

NEW YORK — Vaccine maker Pfizer says it’s already in regular communication with the president-elect Joe Biden’s transition team as part of ongoing efforts to keep all interested parties updated on its coronavirus vaccine and its distribution.

“There is no room for politics in this process,” said Pfizer spokeswoman Sharon Castillo.

Last Sunday, Biden chief of staff Ron Klain said the transition team planned to meet with Pfizer and other vaccine makers, as President Donald Trump continues to stall the formal transition process to a new administration.

Castillo said Pfizer maintains ongoing communication with the Trump administration, state governors, and leading lawmakers of both parties in Congress. The Biden team is part of that effort.

“We’re in the middle of a transition and we’re communicating with both sides,” she said.

There’s no word yet on a formal meeting between Biden and the pharmaceutical chiefs.

NEW YORK — Vaccine maker Pfizer says it’s already in regular communication with the president-elect Joe Biden’s transition team as part of ongoing efforts to keep all interested parties updated on its coronavirus vaccine and its distribution.

“There is no room for politics in this process,” said Pfizer spokeswoman Sharon Castillo.

Last Sunday, Biden chief of staff Ron Klain said the transition team planned to meet with Pfizer and other vaccine makers, as President Donald Trump continues to stall the formal transition process to a new administration.

Castillo said Pfizer maintains ongoing communication with the Trump administration, state governors, and leading lawmakers of both parties in Congress. The Biden team is part of that effort.

“We’re in the middle of a transition and we’re communicating with both sides,” she said.

There’s no word yet on a formal meeting between Biden and the pharmaceutical chiefs.

The South Dakota State Medical Association has been urging people to voluntarily wear masks but updated its stance to “strongly support” a statewide mandate.

South Dakota is second in the nation in new cases per capita over the last two weeks.

There were 2,089 new cases per 100,000 people, according to data from Johns Hopkins University. That’s roughly one out of 48 people in South Dakota testing positive in the last two weeks.

Republican Gov. Kristi Noem has opposed statewide mask mandates, arguing they have not been proven to halt the spread of infections. She plans to give an update on the state’s coronavirus status later Wednesday.