The Latest: Sabres to have limited number of fans at 4 games 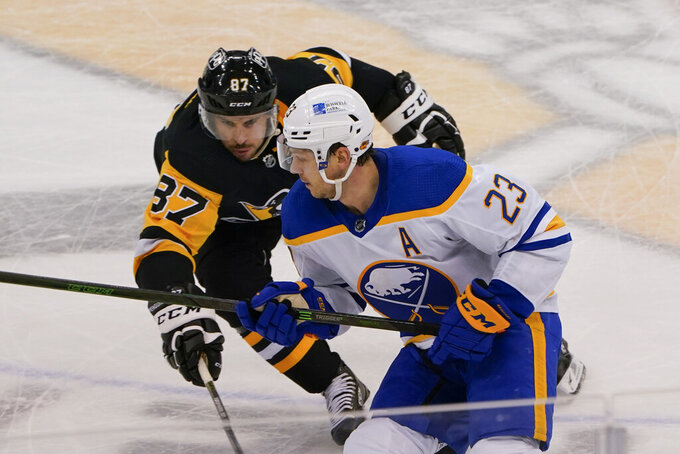 The Buffalo Sabres are welcoming a limited number of fans to attend four games next month.

Tickets will go on sale Monday for Buffalo’s games against the New York Rangers on April 3, Washington on April 9, Pittsburgh on April 17 and Boston on April 23.

The Sabres had fans in attendance only once this season. They honored front-line health care workers last week. The team was scheduled to have paying fans attend a game against Boston two days later, but the outing was postponed after the Bruins had five players enter the NHL’s COVID-19 protocol.

Stricklin is in isolation at his home. He also missed last weekend’s series against Tennessee.

No other players or coaches were affected by the coach’s positive test.

The 49-year-old Stricklin is in his eighth season as Georgia’s coach. He led the Bulldogs to the NCAA Tournament in 2018 and 2019.

The National Women’s Hockey League announced Friday there were no positive COVID-19 results from PCR tests administered to players and team personnel for the Isobel Cup Playoffs in Boston to decide the league champion.

Action begins Saturday and rapid tests will only be administered if a player or staff member exhibits symptoms or was exposed to a known positive case.

COVID-19 protocols include mask wearing in locker rooms and at all times when off the ice. All non-player staff have to wear masks in facilities at all times and no fans will be allowed.

Admission to the rink and associated facilities is limited to essential personnel. No fans are allowed.

Buffalo Sabres interim coach Don Granato and assistant Matt Ellis are headed back to work after being cleared from the NHL’s COVID-19 protocol.

The Sabres announced Granato and Ellis are traveling to join the team in Boston after spending a night in self-isolation in Pittsburgh.

Both were placed in the protocol on Thursday, hours before Buffalo’s game against the Penguins. That led to general manager Kevyn Adams stepping in to coach the 4-0 loss, which extended the Sabres franchise-record winless skid to 0-14-2.

The Michigan Wolverines are out of the NCAA Division I men's hockey tournament because of positive COVID-19 test results within the team's Tier 1 testing group.

The NCAA's Ice Hockey Committee and Medical Advisory Group made the decision Friday.

Michigan coach Mel Pearson said he was “devastated” for the players and called it unfortunate. He said he didn’t completely understand the final decision but had to respect it.

Michigan's athletes and staff had remained in daily testing protocol since the conclusion of the Big Ten Tournament and were preparing for Friday’s contest when notified by the NCAA.

The eighth-ranked Wolverines were scheduled to meet No. 9 Minnesota Duluth, the two-time defending national champion, in a Midwest Regional semifinal. The game will be ruled a no-contest and Minnesota Duluth will advance to the next round.

Michigan joins Notre Dame, who had to bow out of the tournament Thursday for the same reason.