The Latest: Smith back with Orioles after positive test 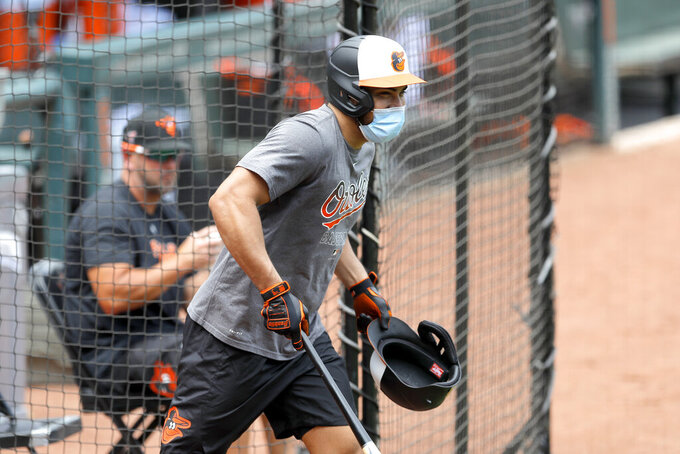 The Latest on the effects of the coronavirus pandemic on sports around the world:

Outfielder Dwight Smith Jr. has rejoined the Baltimore Orioles after missing the start of summer camp following a positive test for the coronavirus.

Smith hopes to be ready to play in Baltimore’s opener at Boston on July 24.

Outfielder Anthony Santander also missed the start of camp because of a positive test. He reported on Tuesday.

Smith tested positive when camp opened early this month — a result that caught him by surprise.

“It was kind of alarming because I really didn’t have symptoms. I didn't lose taste or smell,” he said. “I felt normal and everybody around me, my family, was fine.”

Smith hit .241 with 13 homers and 53 RBIs in 101 games for Baltimore last year. He is expected to be a starter for the rebuilding Orioles, who are coming off two straight 100-loss seasons.

Jones said Friday he tested positive when he returned to Edmonton from his home in Dallas. He says he was asymptomatic.

Jones said he completed his 14 days of isolation before camp started, but was held out of main sessions for the first three days as he tried to get himself back up to speed.

He said he revealed his positive test “to set the record straight.”

“It’s obviously a very weird disease, a weird time in the world right now,” Jones said. “Some people get really affected by it and it can be deadly and other people would never know they had it and I was maybe lucky enough to be in that group. If I had never gotten tested, I would have never realized I had it.”