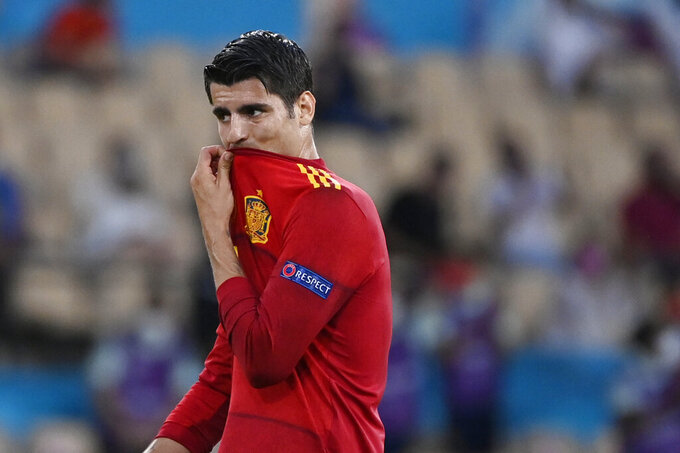 The chances came and went but neither Spain nor Sweden managed to put any of them in the net in a 0-0 draw at the European Championship.

Spain dominated possession and stayed close to the Swedish net during most of the match but couldn’t capitalize on its many scoring opportunities at La Cartuja Stadium in Seville.

Sweden looked dangerous a few times. The team came close near the end of the first half when Real Sociedad forward Alexander Isak had his shot from inside the area hit the post after deflecting off Spain defender Marcos Llorente.

Álvaro Morata had Spain’s best chance just a few minutes earlier but his shot missed wide with goalkeeper Robin Olsen as the only opponent to beat inside the area.

Pedri González has become the youngest Spaniard to play in a European Championship.

The 18-year-old Pedri started in Spain’s Group E opener against Sweden in Seville.

It was only the fifth international appearance for the Barcelona midfielder.

The previous youngest player for Spain at the continental tournament was Miguel Tendillo. He was 19 years old in the 1980 edition.

The capacity at Wembley Stadium will increase to about 40,000 as the European Championship progresses after the British government decided to further ease coronavirus restrictions later this month.

The number of spectators will be increased from the permitted 22,500 currently for the group matches.

One round of 16 game, both semifinals and the final will benefit from the enlarged capacity. The move comes despite the government’s delaying the removal of more coronavirus restrictions in England by four weeks until July 19.

Spectators at Wembley have to provide proof of being fully vaccinated or a negative COVID-19 test to access the stadium.

Wembley’s normal capacity for soccer is 90,000.

Slovakia capitalized on a second-half red card and got a goal from Milan Skriniar in a 2-1 victory over Poland at the European Championship.

The Inter Milan center back brought down a corner and toe-poked the ball into the net from 15 meters in the 69th minute. The goal came seven minutes after Poland midfielder Grzegorz Krychowiak had been sent off for a second yellow card.

Slovakia went ahead in the 18th minute when Wojciech Szczesny became the first goalkeeper to score an own-goal at the tournament. Szczesny was unfortunate as the ball rebounded off his near post, onto his outstretched arm and back into the net following a shot by Slovakia winger Robert Mak.

Karol Linetty equalized barely 30 seconds into the second half.

Wojciech Szczesny has become the first goalkeeper to score an own-goal at a European Championship.

The Poland keeper was unfortunate as the ball rebounded off his near post, onto his outstretched arm and back into the net following a shot by Slovakia winger Robert Mak.

The 18th-minute goal gave Slovakia a 1-0 lead in St. Petersburg.

Cristiano Ronaldo says speculation about his future at Juventus “doesn’t faze me at all.”

The Portugal forward says he’s focused only on the European Championship “regardless of staying in Juve or being transferred.”

Ronaldo has been linked with a return to Manchester United. He left the English club in 2009 for Real Madrid. He has spent the past three seasons in Turin.

Ronaldo says “if I were 18 or 19 maybe I would have some sleepless nights. But I’m 36 years old and whatever comes will be for the best.”

Defending champion Portugal will play its opening match at Euro 2020 on Tuesday against Hungary at the Puskas Arena. The group also includes World Cup champion France and Germany.

Bavaria health minister Klaus Holetschek has called on soccer fans to “show the coronavirus the red card” by remaining careful while Germany plays its European Championship games in Munich.

Up to 14,000 fans will be allowed into the stadium for the German team’s group games against France, Portugal and Hungary under strict hygiene conditions. A quarterfinal match will take place in Munich on July 2.

Fans attending matches will need to show a negative test result for COVID-19, proof of two vaccine shots or proof of recovery from an infection. They will also need to wear protective masks at all times.

Holetschek says “we all know the pandemic is not over. Therefore the European Championship will be different from what some may have wanted.”

UEFA has defended itself from claims Denmark players were put under pressure to resume their European Championship game against Finland after Christian Eriksen collapsed on the field.

UEFA says it’s “sure it treated the matter with utmost respect for the sensitive situation and for the players.”

UEFA announced the game in Copenhagen on Saturday would restart after a 90-minute stoppage “following the request made by players of both teams.”

Schmeichel says the players were given options to resume, come back on Sunday at noon, or forfeit the game as a 3-0 loss.

UEFA says “the players’ need for 48 hours’ rest between matches eliminated other options.”

Patrik Schick scored his second goal from near the halfway line to give the Czech Republic a 2-0 victory over Scotland at the European Championship.

Scotland lost possession in their half and the ball fell to the Bayern Leverkusen forward. He spotted opposing goalkeeper David Marshall off his line and launched a curling shot that bounced into goal in the 52nd minute.

Schick earlier gave the Czechs the lead in the 42nd minute with a powerful header after he muscled himself between two Scotland defenders.

The Czech Republic forward scored the goal against Scotland from near the halfway line in his team’s opening European Championship match.

Scotland had just lost possession in their half and Schick spotted Scotland goalkeeper David Marshall off his line. His shot squeezed inside the near post in the 52nd minute to give the Czechs a 2-0 lead.

Belgium’s players will spend less time in St. Petersburg ahead of their third European Championship match because team management wants the squad to prepare “in a more COVID-safe environment.”

The change in Belgium’s plans comes as authorities in the Russian city say they are tightening anti-coronavirus restrictions from Thursday in an effort to curb a new spike in infections.

That includes closing food courts in the city’s shopping malls and its Euro 2020 fan zone.

Dejan Kulusevski and Mattias Svanberg will join up with the Sweden squad at the European Championship once they have finished their periods of isolation after testing positive for the coronavirus.

The six players who were brought in to train in a reserve bubble alongside the Euro 2020 squad have been released.

Sweden team doctor Ander Valentin says Kulusevski and Svanberg “will return to us in the squad as soon as they are guaranteed infection-free.”

They returned positive tests on Tuesday.

Sweden’s first game at Euro 2020 is against Spain on Monday.

Christian Eriksen has told his Denmark teammates to look forward to their European Championship game against Belgium on Thursday.

Three of Denmark’s players have spoken to the media for the first time since Eriksen’s collapse during Saturday’s game against Finland at Euro 2020.

Pierre-Emile Hojbjerg says Eriksen delivered a message via video link from the hospital that he is doing OK and that they should try to focus on playing the next game. He says seeing Eriksen smile gave him ”a form of energy” and that the team will play for the midfielder against Belgium.

Eriksen suffered cardiac arrest and had to be resuscitated with a defibrillator. Goalkeeper Kasper Schmeichel praised Denmark’s medical staff as ”heroes” who performed ”a miracle.”

Forward Martin Braithwaite fought back tears as he described praying for Eriksen on the field as he was getting treatment.

Robert Lewandowski will make his first appearance at this European Championship on Day 4 of the tournament.

The FIFA player of the year will be Poland’s main scoring threat when the team takes on Slovakia in St. Petersburg in the middle of three Euro 2020 matches.

Scotland will play the Czech Republic in the first match of the day in Glasgow and Spain will take on Sweden in Sevilla in the last one.