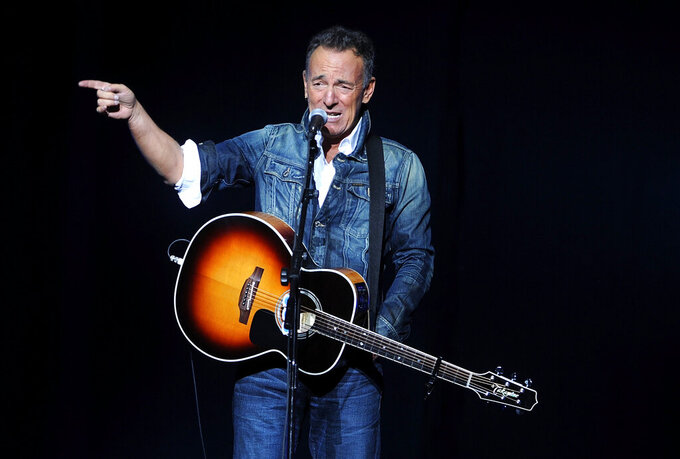 WASHINGTON (AP) — The Latest on President Donald Trump's impeachment, President-elect Joe Biden's inauguration and the fallout from the Jan. 6 attack of the Capitol by pro-Trump loyalists (all times local):

Actor-playwright Lin-Manuel Miranda and rockers Jon Bon Jovi and Bruce Springsteen are among the stars who will highlight a prime-time virtual celebration televised Wednesday night after Joe Biden is inaugurated as the 46th president.

Biden’s inaugural committee announced the lineup Sunday for “Celebrating America,” a multinetwork broadcast that the committee bills as a mix of stars and everyday citizens.

Miranda, who wrote and starred in Broadway’s “Hamilton,” will appear for a classical recitation. Musicians John Legend, Demi Lovato and Justin Timberlake, among others, will join Springsteen and Bon Jovi. Actresses Kerry Washington and Eva Longoria will act as hostesses, with former NBA star Kareem Abdul-Jabbar also scheduled to appear.

The segments will include tributes to a UPS driver, a kindergarten teacher and Sandra Lindsey, the first American to receive the COVID-19 vaccine outside a clinical trial.

The broadcast is in lieu of traditional inaugural balls. Biden plans still to be sworn in on the Capitol's West Front, but with a scaled-down ceremony because of the coronavirus and tight security after the Jan. 6 violent insurrection on the Capitol as Congress convened to certify his victory.

HERE’S WHAT YOU NEED TO KNOW ABOUT IMPEACHMENT, THE INAUGURATION AND THE FALLOUT FROM THE JAN. 6 RIOTING AT THE CAPITOL:

Across the country, some statehouses are closed, fences are up and extra police are in place as authorities brace for potentially violent demonstrations over the coming days. The safeguards will remain in place leading up to President-elect Joe Biden’s inauguration on Wednesday. Biden plans to roll back some of President Donald Trump’s most controversial policies and take steps to address the coronavirus pandemic hours after taking office.

— Deceptions in the time of the ‘alternative facts’ president

— Guard troops pour into Washington as states answer the call

— Harris to be sworn in by Justice Sotomayor at inauguration

— Biden to prioritize legal status for millions of immigrants

— Will Trump’s mishandling of records leave a hole in history?

— Biden says his advisers will lead with ‘science and truth’

HERE’S WHAT ELSE IS GOING ON:

Aides to the California Democrat confirm the timing and say Gov. Gavin Newsom is aware of her decision. That clears the way for Newsom to appoint fellow Democrat Alex Padilla, now California’s secretary of state, to serve the final two years of Harris’ term.

Padilla will be the first Latino senator from California, where about 40% of residents are Hispanic.

Harris will give no farewell Senate floor speech. The Senate isn’t scheduled to reconvene until Tuesday, the eve of Inauguration Day.

The threat of extremist groups descending on state capitals in a series of demonstrations Sunday prompted governors to roll out a massive show of force and implement tight security measures at statehouses across the country.

Fencing, boarded-up windows and lines of police and National Guard troops have transformed statehouse grounds ahead of expected demonstrations leading up to President-elect Joe Biden’s inauguration on Wednesday.

The stepped-up security measures were intended to safeguard seats of government from the type of violence that occurred at the U.S. Capitol on Jan. 6, when a mob supporting President Donald Trump overran the building while Congress was certifying the Electoral College vote.

The FBI has warned of the potential for armed protests in the nation’s capital and all 50 state capitals. Some social media messages had targeted Sunday for demonstrations, though it remained unclear how many people might show up.