The Latest: Syracuse players all test negative after ACC 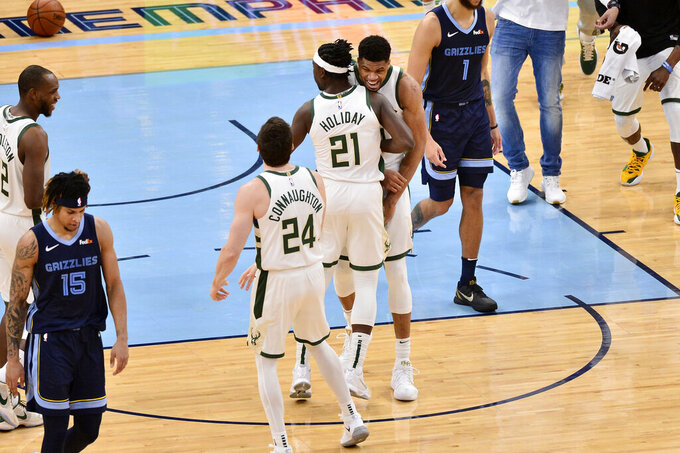 Wildhack also said Friday night that no member of the program will be required to enter quarantine.

Virginia withdrew from the ACC Tournament on Friday because of a positive COVID-19 test on a player.

North Carolina A&T has pulled out of the Mid-Eastern Athletic Conference Tournament and ended its season amid a positive COVID-19 test within the program.

The school and league announced the move Thursday, a day before the Aggies were due to play as the No. 1 seed from the league’s Southern Division. North Carolina A&T was pursuing its first NCAA bid since 2013.

In a statement, athletics director Earl M. Hilton III says the news is “devastating,” adding: “My heart aches so much for these young men.”

The Aggies were due to play the winner of Thursday’s North Carolina Central-Norfolk State game in Norfolk, Virginia. The winner will now advance to Saturday’s championship game.

The Milwaukee Bucks are increasing the number of fans who can attend their home games.

Bucks officials announced Thursday that the Milwaukee Health Department has approved a plan to allow a maximum attendance of 18% of Fiserv Forum’s seating capacity, which is approximately 3,280 fans

The change will take effect March 20 when the Bucks host the San Antonio Spurs.

The Bucks have been playing home games with fans filling 10% of Fiserv Forum’s seating capacity, which adds up to about 1,800 spectators.

There were no fans at Fiserv Forum for the start of the season. The Bucks began allowing spectators during an eight-game homestand that began Feb. 16, and they’ve been playing with fans filling 10% of the seating capacity since Feb. 21.