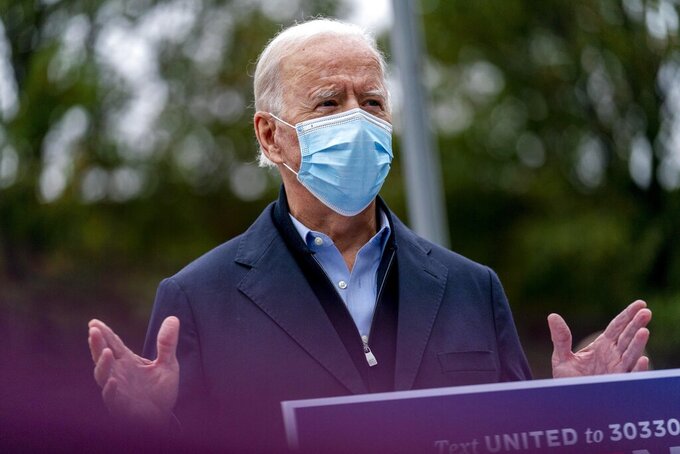 President Donald Trump is celebrating the expected confirmation of Amy Coney Barrett to the U.S. Supreme Court as he campaigns in Pennsylvania during his third rally of the day.

Trump asked a crowd of thousands that gathered Monday at an airport in Martinsburg: "That was a good choice, wasn’t it?”

Trump says he’s glad that Barrett didn’t run for president and that he would rather be running against former Vice President Joe Biden.

He says, “We were all watching in great amusement as she was so-called grilled by the opposition.”

President Donald Trump plans to intensify an already breakneck travel schedule in the final full week of the presidential campaign, overlooking a surge of coronavirus cases in the U.S. and a fresh outbreak in his own White House. Democrat Joe Biden traveled to Chester, Pennsylvania, on Monday to boost get-out-the-vote efforts.

— House already won? Pelosi thinks so, and reaches for more

— Pence to keep up travel despite contact with infected aides

Democrat Joe Biden plans to campaign in Iowa on Friday, making his first trip as the party’s presidential nominee just four days before the election to a state President Donald Trump carried easily in 2016.

Biden aides confirmed that the former vice president was expected to hold a morning campaign event Friday in central Iowa, though it was not clear exactly where he planned to campaign.

Biden is campaigning this week in Pennsylvania and Florida, key swing states Trump won in 2016. Biden is also planning to campaign Tuesday in Georgia, where no Democrat has won since 1992.

It would be an ironic homecoming for Biden in Iowa. He was last in the state on Feb. 2, the eve of a unceremonious fourth-place finish in Iowa’s leadoff Democratic nominating caucuses. Biden staged a dramatic comeback beginning Feb. 29 by winning the South Carolina primary.

Polls have shown the race to be very close in Iowa, where Trump defeated Democrat Hillary Clinton in 2016 by 9.4 percentage points, and winning in more than 30 counties carried in 2012 by Democrat Barack Obama.

Vice President Mike Pence has met a few hundred supporters on an airport tarmac for a campaign rally in northern Minnesota’s Iron range.

Most in the crowd on Monday were not wearing masks or social distancing as the vice president gave his remarks in the freezing weather.

The vice president made the campaign stop in Minnesota after refusing to quarantine following exposure to staffers who tested positive for COVID-19. He arrived at the rally wearing a mask but removed the mask as he reached the podium to speak to the crowd of supporters.

Amid chants of “four more years,” Pence touched on military spending, the economy, support for law enforcement and health care before lauding the Trump administration’s response to the pandemic in his speech. The vice president said the administration is aiming to have a vaccine for the virus and “tens of millions of doses” before the end of the year.

He says, “I’ll make you a promise, with that same energy and ingenuity, the work of your president, the work at the state level, the work of health care providers, doctors and nurses, we’re going to continue to work our hearts out until the day comes that we put this coronavirus in the past.”

Speaking to reporters as he campaigned in Pennsylvania on Monday, Biden urged the president “to have a little bit of shame because people are dying” amid new spikes in coronavirus cases across the country.

The U.S. death toll from the pandemic tops 225,000. Biden has made Trump’s handling of the virus an anchor of his general election campaign.

Biden also has been critical of Republicans’ speedy confirmation of Barrett. But he said Monday he gives “my word” that he hasn’t decided whether he’d back some Democrats’ calls to expand the court if he takes office to counter Republican power plays.

He said he’d give a “bipartisan” commission of “constitutional scholars” 180 days from Inauguration Day to recommend changes to the federal court system. Biden said he’s “not a fan” of court expansion but promised to listen to experts.

Democrat Joe Biden says he’s adding Iowa and Wisconsin to his travel itinerary for the final week before Election Day, but insists he’s not overconfident about his prospects of unseating President Donald Trump.

Biden made the comments Monday in Chester, Pennsylvania, where he sought to boost get-out-the-vote efforts.

Biden’s last-minute travel mixes states that had razor-thin margins four years ago with more heavily Republican areas that had once been considered reliable Trump states.

Pennsylvania and Wisconsin were among the Great Lakes states that Trump won by less than 1 percentage point over Democrat Hillary Clinton in 2016. Biden has traveled to Pennsylvania more than any other state since becoming the Democratic nominee.

Trump’s winning margin in Iowa approached double digits in 2016. Biden will spend Tuesday in Georgia, which hasn’t supported a Democratic presidential nominee since 1992.

Trump campaign manager Bill Stepien said earlier Monday that he wants Biden “to expend his limited travel on states that he’s not going to win in 2020.”

President Donald Trump is downplaying his opponent’s concerns about the surge in coronavirus cases as he campaigns in Pennsylvania.

Trump spoke to thousands of supporters who gathered midday Monday to hear him near an airport surrounded by Lancaster County farmland. Most were not wearing masks.

With Election Day just over a week away, average deaths per day across the country are up 10% over the past two weeks, from 721 to nearly 794 as of Sunday, according to data from Johns Hopkins University. Confirmed daily infections are rising in 47 states, and deaths are up in 34.

President Donald Trump has wrapped up the first of three campaign rallies in Pennsylvania, where he told supporters that he wanted to discuss an issue of “existential importance” as he focuses on former Vice President Joe Biden’s policies on energy.

Pennsylvania is the second leading producer of natural gas in the country behind Texas.

Trump claims that Biden would “abolish the entire U.S. oil industry.” Trump says that means no fracking and no jobs for Pennsylvania families, adding “Biden’s plan is an economic death sentence for Pennsylvania’s energy sector.”

He is seizing on Biden’s comments in last week’s debate that he would “transition away from the oil industry.”

But Biden sought to clarify later that he was talking about ending federal subsidies for oil companies. He also said “we’re not getting rid of fossil fuels for a long time.”

Biden has also repeatedly pledged not to abolish fracking. Instead, he has called for no new fracking permits on federal lands.

Trump spoke to hundreds of supporters in Allentown as he focuses on the key battleground state of Pennsylvania.

President Donald Trump’s son-in-law and senior adviser Jared Kushner says the president wants to help Black people succeed but that they have to want to be successful for the policies to work.

He said Black people are mostly Democrats, but are starting to see that Trump’s policies can help them solve problems they have complained about for years.

Kushner also criticized people who raised their voices after the death of George Floyd, a Black man who died in police custody, but then didn’t follow through and work to find ways to improve the lives of Black people in America.

“You saw a lot of people who were just virtue signaling -- they go on Instagram and cry, or they would, you know, put a slogan on their jersey or write something on a basketball court,” Kushner said. “Quite frankly, that was doing more to polarize the country than it was to bring people forward. You solve problems with solutions.”

Melania Trump is set to make her first solo campaign-trail appearance of 2020 for President Donald Trump.

Trump’s reelection campaign says the first lady will appear at an event Tuesday in Atglen, Pennsylvania, that will be moderated by former White House counselor Kellyanne Conway.

The campaign says she will share the president’s agenda with Pennsylvanians.

The first lady has not appeared at one of the president’s campaign events since June 2019 in Orlando, Florida, where the president formally announced his bid for a second term.

She had been scheduled to headline campaign fundraisers back in March, but those events were canceled due to the coronavirus outbreak. Mrs. Trump recently recovered from a bout with COVID-19, the disease caused by the novel coronavirus.

White House chief of staff Mark Meadows is taking issue with Democratic presidential nominee Joe Biden’s criticism that the Trump administration has given up on trying to control the coronavirus pandemic.

Biden had seized on Meadows’ Sunday comments on CNN in which Meadows said “we’re not going to control the pandemic.” Asked why, Meadows said it’s “because it is a contagious virus just like the flu.”

Those comments had produced criticism and at least one news headline saying: “White House gives up on trying to control virus spread.”

On Monday, Meadows tried to do some cleanup. He says, “The only person waving a white flag along with his white mask is Joe Biden.”

Meadows says Trump won’t give up until all Americans are safe and the virus is defeated. He says, “We are going to defeat the virus. We are not going to control it. We will try to contain it as best we can.”

Meadows spoke to reporters at the White House on Monday before the Republican president travels to campaign events in the critical battleground state of Pennsylvania.