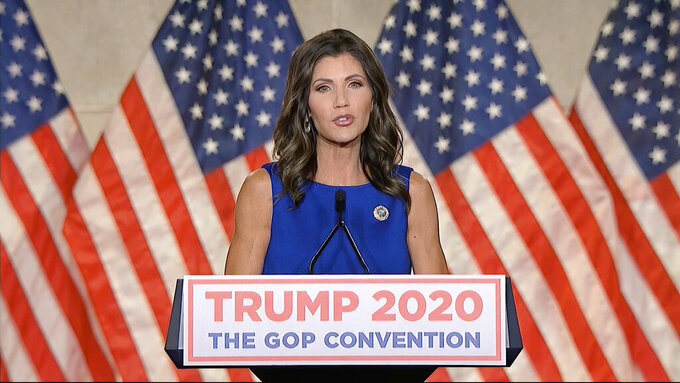 The president, first lady, Pence and Pence’s wife stood on stage with their hands over their hearts as country music star Trace Adkins performed “The Star-Spangled Banner.”

Trump didn’t make any comments at the podium, but after the national anthem, he and the first lady greeted people in the audience, chatting with supporters while standing a few feet away.

Pence was delivering the evening’s keynote from Fort McHenry, where Americans defended Baltimore Harbor from the British in the War of 1812 and inspired Francis Scott Key to write “The Star-Spangled Banner."

HERE’S WHAT YOU NEED TO KNOW ABOUT WEDNESDAY’S REPUBLICAN NATIONAL CONVENTION:

Vice President Mike Pence is denouncing violence in American streets but not acknowledging the Black people who have been injured or killed by law enforcement.

In his speech to the Republican National Convention of Wednesday, Pence brought up the violence that erupted in Kenosha, Wisconsin, following the shooting by police of Jacob Blake.

A white 17-year-old police admirer was arrested earlier Wednesday on suspicion of first-degree intentional homicide after two people were shot to death during a third straight night of protests in Kenosha over Blake’s shooting.

Blake was shot in the back seven times on Sunday as he leaned into his SUV, three of his children seated inside. His family says he is paralyzed from the waist down.

Pence, accepting the GOP nomination for vice president, said, “The violence must stop, whether in Minneapolis, Portland or Kenosha.” He added, “We will have law and order on the streets of this country for every American of every race and creed and color.”

Vice President Mike Pence says people in the path of Hurricane Laura should heed warnings about the strength of the storm and he pledged the Trump administration’s help.

He said, “Stay safe and know that we’ll be with you every step of the way.”

Pence spoke at Fort McHenry in Baltimore, Maryland, as he “humbly” accepted the GOP’s nomination for vice president at the Republican National Convention. It was not clear until just before he took the stage that he would address the looming Category 4 hurricane.

The strengthening storm menaced Texas and Louisiana along the Gulf Coast, raising fears of a 20-foot (6-meter) storm surge that forecasters said would be “unsurvivable.” Authorities implored coastal residents of Texas and Louisiana to evacuate, but not everyone did before winds began buffeting trees back and forth.

A Black conservative running for a Utah congressional seat says America needs more leaders like President Donald Trump who stand by their principles, won’t compromise and who “will stand up to the lawlessness supported by the radical left.”

On Wednesday at the Republican National Convention, Burgess Owens decried civil unrest that’s followed some racial injustice protests and said America is at a crossroads in November.

He declared, “Mobs torch our cities while popular members of Congress promote the same socialism my father fought against in World War II.”

Owens is in a race that could test GOP’s ability to recapture the suburban districts that gave Democrats control of the House. The former NFL player and Fox News commentator handily won the Republican primary by running to the right of his opponents, and he is trying to reclaim the suburban Salt Lake City district once held by Mia Love, another Black conservative who lost in 2018 to a moderate Democrat, Ben McAdams.

A young Republican congressional candidate from North Carolina is decrying “the radical left” but urging Americans to “to be a radical” for freedom, liberty and the republic.

Twenty-five-year-old Madison Cawthorn made the comments in an address at the Republican National Convention on Wednesday.

Cawthorn, who is white, says national leaders on the left have embraced “radicalized identity politics” that rejects the vision of the Rev. Martin Luther King Jr.

Cawthorn says millions of people risk their lives to come to the U.S. “because they believe in the dream of MLK and the American dream,” and urged people to join the GOP as “the party of freedom.”

Cawthorn defeated Trump’s preferred candidate in an upset in the June GOP primary runoff. He would be among the youngest members of Congress ever if elected in November.

At the end of his speech, Cawthorn, who uses a wheelchair after being partially paralyzed years ago, stood up with the help of a walker.

A supporter of President Donald Trump’s who is charged with insider trading ended up speaking at the Republican National Convention after all.

The campaign would not definitively say earlier Wednesday whether Jack Brewer, a former professional football player and a member of Black Voices for Trump, would speak. But he did address the convention on Wednesday night.

Brewer argued that not liking Trump’s tone was not enough to merit a vote for Democrat Joe Biden.

The U.S. Securities and Exchange Commission accused Brewer this month of illegal insider trading in the stock of a small company that operated a communications network for police. Brewer’s investment advisory firm is registered with the SEC.

A message to Brewer through one of his companies wasn’t returned Wednesday.

A Washington nun who is also a surgeon and retired U.S. Army officer says, “Donald Trump is the most pro-life President that this nation has ever had.”

Sister Deirdre “Dede” Byrne of the Little Workers of the Sacred Hearts of Jesus and Mary focused her remarks Wednesday night at the Republican National Convention on abortion.

She says the president’s “belief in the sanctity of life transcends politics.”

While Trump has fully embraced an anti-abortion agenda, some people of faith — particularly more liberal ones — point to a broader view of the “pro-life” label in criticizing some of his policy proposals as inconsistent with that interpretation. For example, Trump’s administration has slashed the refugee admissions cap for the U.S. to historic lows, while also pursuing a policy of separating migrant families at the border.

One of President Donald Trump’s most visible and vocal supporters says her boss’s empathy for the changes in her life portray the type of world she wants for her daughter.

White House press secretary Kayleigh McEnany said Wednesday night during the Republican National Convention that Trump has supported her “both as a new mom and as an American with a preexisting condition.”

McEnany underwent a preventative mastectomy in 2018 after learning she carried a genetic mutation that enhanced her chances for breast cancer.

McEnany, who has a 9-month-old child, said, “I want my daughter to grow up in President Donald Trump’s America.”

South Dakota Gov. Kristi Noem is echoing many of her fellow Republicans’ dark portrayal of America under Democratic leadership who have spoken at the Republican National Convention this week.

But she’s doing so as she elevates her national profile with some talk of her running for president in 2024.

Noem on Wednesday night broadly cast cities governed by Democrats as “being overrun by violent mobs,” as many have before her on the two previous nights of the convention.

Noem has crept into the national conservative discussion by appearing regularly on Fox News in the past year after installing a satellite television link-up in her office in remote Pierre, South Dakota, and consulting often with former Trump campaign adviser Corey Lewandowski.

Noem did not mention her praise of hydroxychloroquine as a treatment for COVID-19, a position that won her praise from President Trump, as did her lifting of the ban on fireworks at Mount Rushmore where she appeared with Trump for an Independence Day weekend rally in July.

Studies have shown hydroxychloroquine isn’t effective against the virus and may even be harmful as a treatment for COVID-19.

A speaker who had been expected to deliver remarks on the third night of the Republican National Convention has been unexpectedly removed from the program hours before airtime. Another speaker's appearance is up in the air.

The campaign confirmed that Robert Unanue, the president and CEO of Goya Foods, will not be speaking Wednesday night, citing a “logistical problem.”

Unanue’s praise of President Donald Trump at the White House last month sparked a boycott of his company’s products.

Also unclear is the status of a speech by former professional football player Jack Brewer.

Brewer was charged with insider trading by the U.S. Securities and Exchange Commission earlier this month. The campaign would not say definitively whether he will speak.

Organizers on Tuesday pulled another featured speaker, “Angel Mom” Mary Ann Mendoza, after she directed her Twitter followers to a series of anti-Semitic, conspiratorial messages hours before her prerecorded segment was set to air.