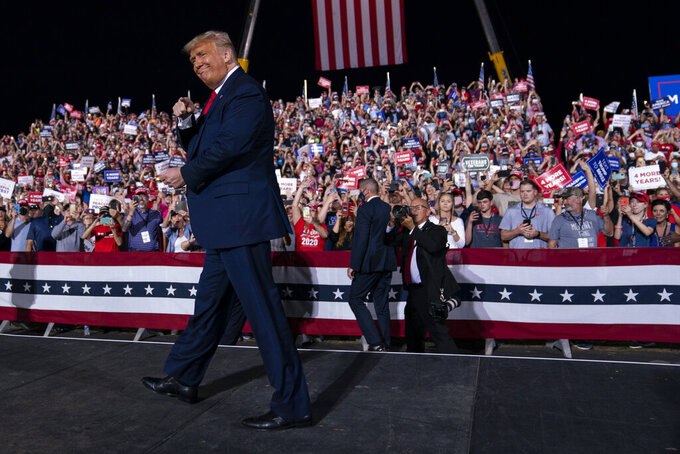 President Donald Trump is keeping up a public feud with “60 Minutes” correspondent Lesley Stahl, who he says took him too seriously after he pleaded for suburban women to love him.

Stahl interviewed Trump at the White House on Tuesday for Sunday’s edition of the news magazine. Trump abruptly ended the interview.

Addressing a campaign rally Wednesday in Gastonia, North Carolina, Trump says Stahl pressed him on his plea for love from suburban women, many of whom have turned away from the president.

Trump says although he was kidding, “I mean it.”

He says Stahl told him: “You are begging for women to love you.”

The president also alluded to a threat he first issued on Twitter to release a White House video of the interview before it airs on Sunday.

President Donald Trump was campaigning in Gastonia, North Carolina, on Wednesday night. His Democratic challenger, Joe Biden, dispatched his ex-boss, former President Barack Obama, to make a pitch for him in Philadelphia.

— Obama, in pitch for Biden, urges Black men not to sit out

— 5 questions as Trump and Biden prepare for final debate

— Will voting in a non-battleground state make a difference?

Obama acknowledged at a Wednesday afternoon roundtable with 14 Black men that the coronavirus pandemic would have been difficult for any leader. But he asked the group to consider “the degree of incompetence and misinformation, the number of people who might not have died had we just done the basics.”

Obama says, “I am so confident in Joe Biden and Kamala Harris surrounding themselves with people who are serious, who know what they’re doing, who are representative of all people — not just some people — and us being able to then dig ourselves out of this hole.”