The Latest: Wake Forest's Tariq Ingraham out for season 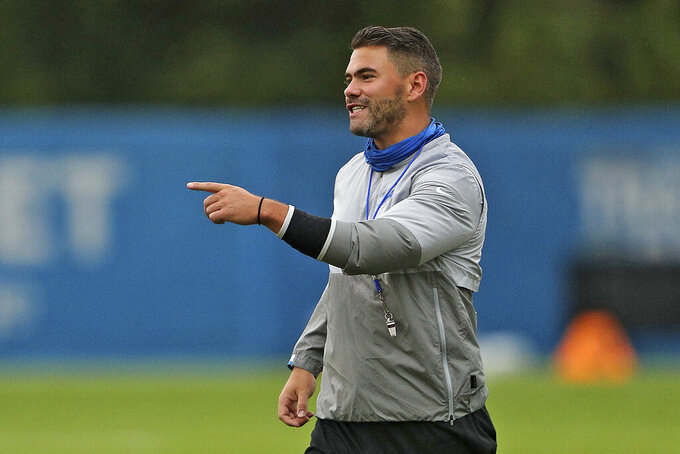 Wake Forest says redshirt freshman Tariq Ingraham is out for the season as he recovers from COVID-19, while graduate transfer Ian DuBose is out indefinitely for medical reasons.

Dr. Chris Miles, who works with Demon Deacons athletics from the Wake Forest Baptist Health system, said in a statement that Ingraham and DuBose are expected to make full recoveries.

Coach Steve Forbes said both players will remain part of the program while recovering and continuing coursework for the spring.

Athletics spokesman Will Pantages said the team returned to practice Sunday, then voted after Monday’s workout to allow players to go home if they chose for Christmas with the plan of returning for practice Saturday.

Wake Forest has now had five straight games either postponed or canceled after the Atlantic Coast Conference announced Tuesday that next week's game against Syracuse was postponed. The Orange have paused team activities due to contact tracing. Both teams are working with the ACC on rescheduling it.

Teams are not allowed to disclose if a player is in quarantine or has tested positive.

Edwards, who signed with Atlanta as an undrafted rookie out of Ferris State, has appeared in one game. He has been on the Falcons’ practice squad most of the season.

The RedHawks had already canceled home games this week against Defiance College and Bellarmine University due to COVID-19 related concerns. They also have postponed upcoming games against Ohio and Central Michigan and will resume their schedule some time after the New Year.

South Carolina’s 2-8 football team won’t be going to a bowl game after pausing team activities due to the novel coronavirus.

The Gamecocks were set to play UAB in the Gasparilla Bowl in Tampa, Florida on Saturday. Instead, the school announced Tuesday it was ending its season.

South Carolina athletic director Ray Tanner had contacted the bowl and the Southeastern Conference office about the Gamecocks not being able to play. Tanner said the combination of positive COVID-19 tests plus necessary contact tracing made it impossible to compete.

That brings the totals since testing began Aug. 1 to 201 players and 359 other personnel as confirmed positive cases out of more than 840,000 tests.

Individuals who test positive for COVID-19 are immediately isolated and not permitted access to club facilities or direct contact with players or personnel. Club medical staff are in regular communication with those who test positive to monitor symptoms.

The Detroit Lions have closed their training facility after two people within the franchise tested positive for COVID-19.

The Lions say players and coaches will have virtual meetings Tuesday.

Detroit is scheduled to play the Tampa Bay Buccaneers, who can clinch a spot in the playoffs with a win, on Saturday at Ford Field.

South Carolina's men’s basketball team has paused activities for a second time this month, canceling a game Wednesday night with South Carolina State after its latest round of COVID-19 testing.

The Gamecocks already have missed games against Wofford and rival Clemson due to the coronavirus. They returned to practice Saturday after more than a week away from the court and had hoped to resume their schedule against South Carolina State. Instead, the program said it will wait for further testing to determine when it can play.

South Carolina’s next scheduled game is at Kentucky on Dec. 29.

The table tennis world team championships have been canceled because of the pandemic.

The championships were originally scheduled for March in the South Korean city of Busan but were then postponed three times.

The International Table Tennis Federation says in a statement that it hoped to hold the event in February 2021 but was forced to cancel “due to the worsening situation in Korea Republic and with the pandemic still problematic in many regions of the world.”

South Korean authorities are trying to limit social gatherings following a recent surge in virus cases. The ITTF says it was informed the measures would not make it possible to host international sports events in the near future.