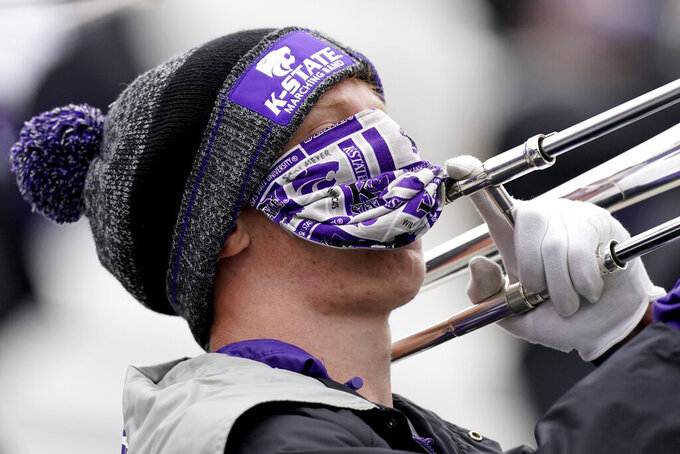 A member of the Kansas State marching band plays the trombone while wearing a face mask during the second half of an NCAA football game against Kansas Saturday, Oct. 24, 2020, in Manhattan, Kan. (AP Photo/Charlie Riedel)

The Wooden Legacy has been canceled this year because of the coronavirus pandemic.

Georgetown, Kansas, UCLA and Virginia had been scheduled to play in the two-day event on Nov. 25-26 in Anaheim, California.

The event’s website said, “See you November 2021!” A spokeswoman did not immediately return a message on Tuesday. The event is owned by ESPN Events.

The event named for the late UCLA coach John Wooden was to be reduced to four teams and played over two days this year. It previously featured eight teams playing over three days.

It was created in 2013 when the John R. Wooden Classic was merged with the Anaheim Classic.

Also, two eight-team men’s basketball tournaments played in South Carolina have been canceled this year because of the coronavirus.

The Charleston Classic and the Myrtle Beach Invitational, set to be played on Nov. 19-20 and Nov. 22, have been called off until 2021.

The websites of both events said that due to the pandemic, the tournaments would be played in Nov. 2021.

The Charleston Classic is held at the home arena of the College of Charleston and was set to include Florida State, Oklahoma State, Penn State, Seton Hall and Tennessee.

The Myrtle Beach Invitation is held on the campus of Coastal Carolina and was set to include Dayton, Missouri, Nebraska and Pitt.

Both tournaments are owned by ESPN Events.

The school says he is not showing symptoms and the team is following all contact tracing, quarantine and treatment protocols.

The positive test is the first in Cal’s athletic department since daily testing began at the beginning of October.

The NFL and its players' union say eight players and 11 other personnel tested positive in the latest round of screening for COVID-19.

All are in isolation and have no access to club facilities, and the medical staff is monitoring symptoms.

To date, more than 500,000 tests have been administered to players and personnel since the beginning of August.

Florida's football program is reporting six new positive tests for the coronavirus in the past week, bringing the team’s total for the month to 37.

The 10th-ranked Gators returned to practice and meetings starting Monday following a two-week hiatus because of a coronavirus outbreak.

Coach Dan Mullen, at least two assistants and more than two dozen players tested positive following a road trip to Texas A&M earlier this month. Everyone on the plane — about 75 people in all — was quarantined because of test results the following day, potential exposure and contact tracing protocols.

The outbreak forced the Gators to shut down team activities and work remotely. The Southeastern Conference rescheduled two games because Florida would not have had at least 53 scholarship players available to play.

The Gators (2-1) are scheduled to host Missouri (2-2) on Saturday, and Mullen says they expect to have enough to play.

A person with knowledge of the situation says coronavirus concerns at FIU have forced officials to call off the Panthers’ home football game with No. 19 Marshall, which had been scheduled for Friday night.

The schools will attempt to reschedule the game in December, according to the person who spoke to The Associated Press on condition of anonymity Tuesday because the postponement had not yet been publicly announced.

FIU has seen more than 30 players miss time this season because of positive coronavirus tests or a need to quarantine after potential exposure. Those absences have depleted the depth chart considerably.

FIU is winless in three games this season. Marshall is 5-0, the last unbeaten team in Conference USA.

Bethune-Cookman won't participate in intercollegiate sports this coming winter or spring. The universtiy located in Daytona Beach, Florida, says it's canceled all athletic events for the remainder of the academic year because of concerns about the coronavirus pandemic.

University President E. LaBrent Chrite said the decision was made “in the face of a surging COVID-19 spike” both in the state of Florida and across the country.

“We have concluded that the risks are too great for our student-athletes and staff to travel and compete at this time,” Chrite said.

Bethune-Cookman has 15 varsity programs, and the fall 2020 seasons were canceled back in July. Chrite said the latest decision was made “after a series of meetings with stakeholders across the campus” along with athletic director Lynn Thompson, coaches, health experts and state officials.

French soccer club Lens says 11 players and seven staff members have tested positive for the coronavirus in the latest round of testing.

Lens is scheduled to play Marseille on Friday.

Last Sunday’s game between Lens and Nantes was postponed after 11 Lens players and two staff members tested positive for COVID-19.

Lens has not named any of those concerned.