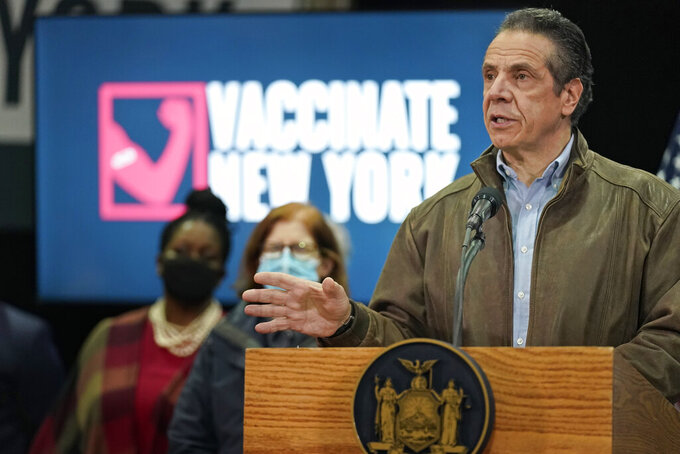 New York Gov. Andrew Cuomo speaks during a press conference before the opening of a mass COVID-19 vaccination site in the Queens borough of New York, Wednesday, Feb. 24, 2021. This FEMA run site, along with another in Brooklyn, gives priority to local residents in an effort to equitably distribute the vaccine. (AP Photo/Seth Wenig, Pool)

He fielded several questions about the state's decision in the spring to temporarily bar nursing homes from refusing to accept COVID-19 patients being discharged from hospitals solely because they’d had the virus.

Zucker said he wanted to “move forward” from such questions, but lawmakers, including both Democrats and Republicans, wouldn’t let him.

“It’s troubling to me that we keep going back to an issue where... all the data has shown... that this is not what brought the infection into the nursing homes,” Zucker said.

Most outbreaks were due to infected nursing home staff members unknowingly bringing the virus into facilities, Zucker said. Substantially all nursing homes had at least some infected patients before receiving any recovering COVID-19 patients discharged from hospitals.

Sen. Dan Stec, a Republican, asked Zucker if he’d rather have his grandparent in a room of 20 out of 50 people infected with COVID-19, or a room with one out of 50 infected.

Zucker said he’d be equally concerned in either room: “Because the disease is ... already in the facility.”

When asked whether the March directive contributed to outbreaks, Zucker said: “No.”

Zucker added there could have been “that random person” who spread it, but said: “This memo was not the driver of nursing home fatalities.”

Some lawmakers also grilled the commissioner about the state's underreporting of the number of COVID-19 deaths among residents in nursing homes and assisted living facilities.

The state's official death toll in long-term care facilities now stands at over 15,000, up from the roughly 9,000 previously disclosed as of late January. Critics say Cuomo was trying to minimize the extent of the pandemic among the state’s most vulnerable at a time when he was lauded for his pandemic leadership.

Lawmakers also questioned why New York ranks among the lowest in the nation for percentage of residents who have received at least one dose of COVID-19 vaccine.

“It is very clear that this administration ... will not acknowledge that you have done anything wrong,” Sen. Gustavo Rivera, a Democrat and Senate health committee chair, told Zucker during the hearing. “It’s as though the administration continues every day being perfect and doing nothing wrong.”

A growing body of research does suggest community spread is the biggest risk factor for outbreaks at nursing homes. Zucker has said that if the state didn't hadn't encouraged nursing homes to find space for patients being discharged from hospitals, it could have led to catastrophic conditions in emergency departments then overwhelmed with patients.

Long-term care residents represent at least a third of all reported pandemic deaths in New York, roughly in line with the national average, according to data from The COVID Tracking Project and John Hopkins University.

Zucker didn’t answer a lawmaker’s question about whether the governor’s office directed him not to respond for months to lawmakers’ August request for data on people living in nursing homes who died of COVID-19.

Zucker said the administration is “looking” at a state law providing partial immunity to nursing homes and hospitals amid the pandemic. Lawmakers rolled back that immunity last summer, but they left in place provisions that protect certain health care providers from being sued or prosecuted over care “related to the diagnosis or treatment of COVID-19.”