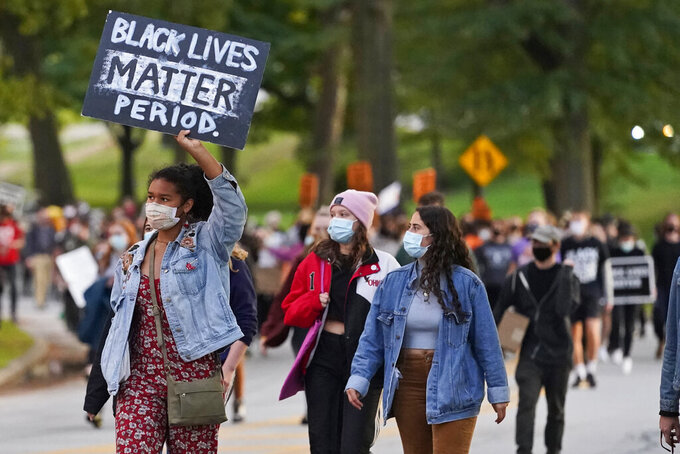 A woman holds up a sign during q protest, Tuesday, Sept. 29, 2020, in Cleveland. Racism would be declared a public health crisis in Ohio and the day celebrating the official end of slavery would become a paid state holiday under racial justice measures reintroduced Tuesday, Feb. 23, 2021, after unsuccessful efforts to pass them during the last legislative session. (AP Photo/Tony Dejak, File)

COLUMBUS, Ohio (AP) — Racism would be declared a public health crisis in Ohio and the day celebrating the official end of slavery would become a paid state holiday under racial justice measures reintroduced Tuesday.

The measures were originally introduced in the wake of the killing of George Floyd in Minneapolis, which sparked nationwide protests in the summer. Efforts to pass the measures last legislative session were unsuccessful.

Democratic Sen. Hearcel Craig, of Columbus, is a cosponsor of both measures and has been a vocal advocate for several racial justice proposals in the chamber.

“We still have a long way to go to achieve racial justice, but this bill will help us honor those who have paved the way to where we are today,” Craig, who is Black, said in a release outlining the effort to make Juneteenth a paid holiday in Ohio.

The effort passed through the Senate unanimously in the last General Assembly but didn't make it to the House.

“Juneteenth was celebrated more widely across the country in 2020. By declaring it a paid state holiday, I hope this renewed awareness and celebration of Black history will continue to increase in the years to come,” Craig said.

If passed, the bipartisan bill would help Ohio become the second state in the country, behind Texas, to make Juneteenth a paid holiday.

The effort by Black lawmakers to declare racism a public health crisis in Ohio took off shortly after millions took to the streets last May to protest the police killings of Floyd and Breonna Taylor in Lousiville, Kentucky.

Ohio became one of the first states to introduce the measure but it did not move past the committee hearings. More than two dozen cities, counties and boards of health across the state have since passed similar declarations.

“While Ohioans may not be currently engaging in protesting at the levels we saw last summer, we know that racism didn’t just go away,” Craig said. “Black Ohioans continue to be arrested and incarcerated at alarming rates, experience wage and workforce disparities as well as maternal and infant mortality and get diagnosed with long-term health conditions like diabetes at higher rates than white Ohioans."

The resolution also came as the rate of Black Americans contracting and dying of COVID-19 was proving to be disproportionate to their white counterparts. The proposal, according to Craig, aims to officially acknowledge racism in Ohio for the first time — and thus allow it to be fully addressed.

The resolution would also provide a glossary of terms to describe instances of systematic racism and how it can affect health. It will also call for funding to be put aside to address the impact of racism in the state, whether in education, housing, criminal justice or health care.

“It shouldn’t be controversial,” Democratic Sen. Sandra Williams, also a cosponsor, said of the effort. "We need to declare racism as a public health crisis to assure every Ohioan that the legislature is working to make Ohio a fairer, more equitable state.”