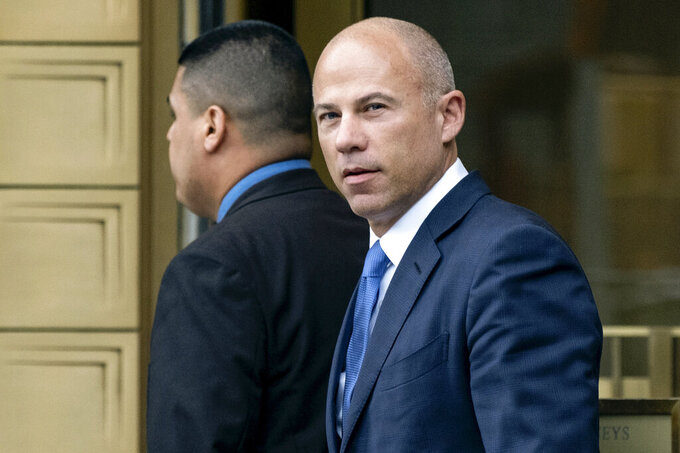 FILE - In this July 23, 2019, file photo, California attorney Michael Avenatti walks from a courthouse in New York, after facing charges. On Wednesday, June 9, 2021, Avenatti's lawyers said he should spend no more than six months behind bars after a jury concluded he tried to extort $25 million from Nike. (AP Photo/Craig Ruttle, File)

NEW YORK (AP) — Michael Avenatti should spend no more than six months behind bars after a jury concluded he tried to extort $25 million from sportswear giant Nike, his lawyers told a judge Wednesday, saying the once high-flying California attorney faces constant ridicule after his “cataclysmic fall.”

In a sentencing memorandum in Manhattan federal court, the lawyers wrote that Avenatti had suffered enough from a three-month stint in prison when his bail was revoked last year and from public ridicule. Sentencing is scheduled for June 30.

Probation Department calculated federal sentencing guidelines to call for a sentence of 11 to 14 years in prison, Avenatti’s lawyers noted. The lawyers said no more than six months in prison and a year of home confinement was appropriate.

They said Nike and a man who ran a youth basketball league in Los Angeles he once represented as he negotiated with Nike had not lost money from the crime, and a recurrence was impossible since Avenatti will never practice law again.

“Avenatti’s epic fall and public shaming has played out in front of the entire world. The Court may take judicial notice of this fact, as Avenatti’s cataclysmic fall has been well-documented. He is openly mocked by the former President of the United States and his preferred media outlets, to the glee of millions of the former President’s followers and supporters," they wrote.

“He cannot go anywhere in public without inducing and subjecting himself to vitriolic comments and abuse. These circumstances alone would deter anyone in Avenatti’s shoes from engaging in similar conduct,” the lawyers added.

In 2019, he was arrested in the Nike extortion case and was also charged in Los Angeles federal court with defrauding former clients and others of millions of dollars. Months later, he was charged with defrauding Daniels of hundreds of thousands of dollars she was owed for a book deal. He has pleaded not guilty to all charges and is awaiting trial in the other cases.

Last year, he was freed in April to home confinement from the Metropolitan Correction Center in Manhattan at the height of the initial wave of the coronavirus in U.S. prisons after he said he was uniquely vulnerable after a bout with pneumonia six months earlier and complained that a cellmate had recently been removed with flu-like symptoms including a severe fever and coughing.

Prosecutors declined through a spokesperson to comment. They are scheduled to make their own sentencing recommendations later this month.