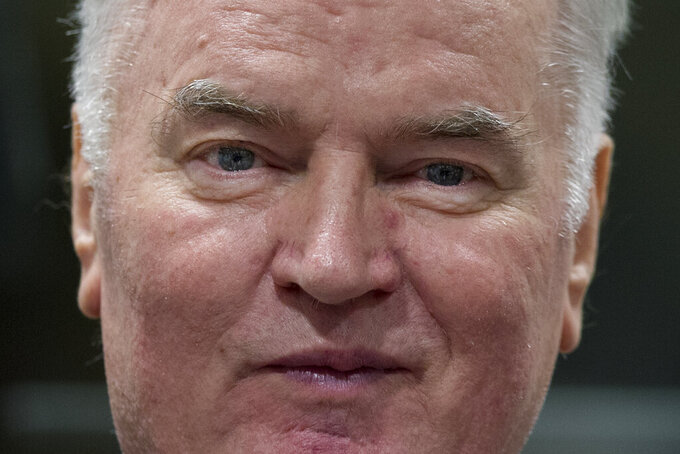 FILE - In this Wednesday, Nov. 22, 2017 file photo, Bosnian Serb military chief Ratko Mladic enters the Yugoslav War Crimes Tribunal in The Hague, Netherlands, to hear the verdict in his genocide trial. Former Bosnian Serb military chief Gen. Ratko Mladic said Friday, July 24, 2020 that his health is bad and getting worse, as his lawyers sought another delay in a United Nations hearing in his appeal against convictions for genocide, war crimes and crimes against humanity. (AP Photo/Peter Dejong, Pool, File)

THE HAGUE, Netherlands (AP) — Former Bosnian Serb military chief Gen. Ratko Mladic said Friday that his health is bad and getting worse, as his lawyers sought another delay for a United Nations hearing in the appeal of his genocide, war crimes and crimes against humanity convictions.

One lawyer warned judges that there are unanswered questions about Mladic's mental fitness to participate in the appeal hearings, citing a doctor as saying the 77-year-old may have early stage dementia. The one-time Bosnian War strongman may have experienced medical malpractice while receiving treatment for anemia, lawyer Dragan Ivetic said.

Ivetic urged the U.N. International Residual Mechanism for Criminal Tribunals to delay a hearing that was scheduled for Aug 25-26 until after medical experts can assess Mladic’s capacity to participate in the proceedings.

“How low does it go before he is not fit, legally competent? We do not know," Ivetic said at a status conference.

“We wish to avoid a miscarriage of justice,” he added. "We would rather support rescheduling the appeals hearing after competency is determined.”

A U.N. tribunal convicted Mladic in 2017 of masterminding crimes throughout the 1992-95 Bosnian War, including the murder by Bosnian Serb forces of more than 8,000 Muslim men and boys in Srebrenica, in eastern Bosnia. He was sentenced to life imprisonment.

Mladic appealed, but the case has been repeatedly delayed by his ill health and, more recently, by the coronavirus pandemic. At the public hearing late next month, his defense attorneys were expected to set out their arguments for overturning his convictions and sentence.

Prosecutors also have appealed against Mladic's acquittal on a second genocide count linked to so-called “ethnic cleansing” campaigns early in the 1992-95 conflict.

But Mladic's health could now again delay the case.

“My health condition is very bad indeed, and it is only deteriorating," Mladic said at Friday's hearing.

Ivetic cited a report from a doctor consulted by the defense as saying Mladic “has neurocognitive impairment in the stage between mild cognitive disorder and early dementia.”

Prosecution lawyers did not comment in court on Ivetic's claims.

In a June 16 ruling on Mladic's complaints about his anemia treatment, the court's president concluded that Mladic had “not demonstrated any error with respect to the medical care provided to him" by court staff.

The U.N. International Residual Mechanism for Criminal Tribunals was set up to deal with appeals and other cases stemming from two U.N. courts, now closed, that prosecuted crimes in the Balkan wars of the 1990s and the Rwanda genocide.