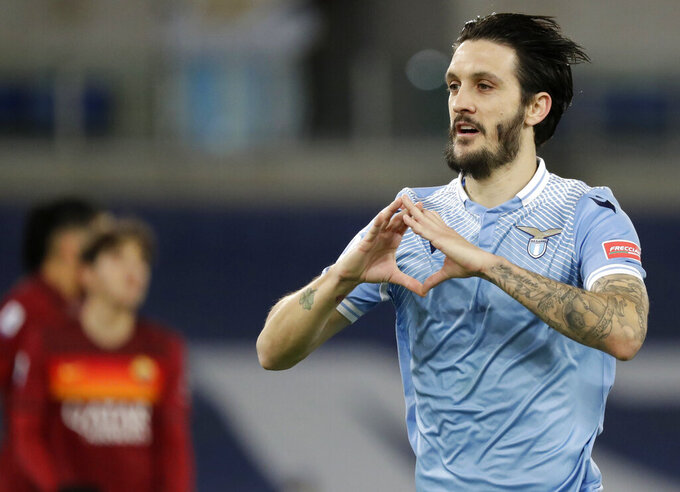 ROME (AP) — Lazio revived its chances of staying in the Champions League by convincingly beating third-placed Roma 3-0 in a Serie A derby on Friday.

Lazio moved up to seventh place, two points behind fourth-placed Juventus, which faces a challenging visit to Inter Milan on Sunday; and three points behind Roma, which saw its title hopes fade.

It was a third straight league win for Lazio, which faces Bayern Munich in the Champions League next month.

“This season it was a bit more important than usual, because we weren’t doing as well in Serie A as we wanted,” Luis Alberto said of the derby. “We improved a great deal, and we confirmed that in the derby."

It matched Lazio’s biggest margin of victory over Roma in Serie A, having also won the derby 3-0 in March 2019 and December 2006.

Immobile opened the scoring 14 minutes in by completing a counterattack when Roma defenders Chris Smalling and Ibañez both slipped to the ground.

Lazio doubled the lead nine minutes later when Ibañez was again left on the ground following strong play from Manuel Lazzari, who set up Luis Alberto for a clear look.

Immobile threatened throughout yet it was Luis Alberto who sealed it with a shot around a defender into the far corner in the 67th.

In a match usually marked by colorful fan choreography, no spectators were allowed inside the Stadio Olimpico due to the coronavirus pandemic.