Leader says Serbia is proud to give citizens Chinese vaccine 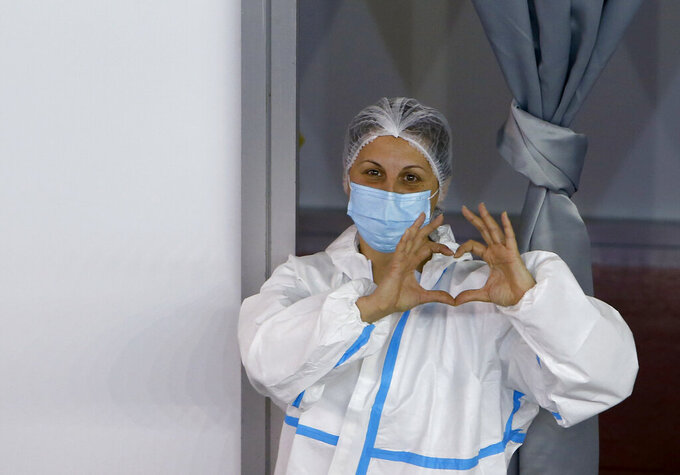 BELGRADE, Serbia (AP) — Serbia’s leader expressed his gratitude to Chinese President Xi Jinping on Wednesday for 1 million doses of a COVID-19 vaccine, saying he is proud Serbia became the first European country to give its population the shots made in China.

Serbian President Aleksandar Vucic said after meeting with the Chinese ambassador in Belgrade that by receiving the Sinopharm vaccine, “the citizens of our country expressed deep trust in the Chinese vaccine and with that also in the Chinese state and Chinese experts.”

This was not the first time the populist president publicly praised China and its Communist Party leader. Vucic kissed the Chinese flag when China delivered masks and other protective equipment in March 2020, and he criticized the European Union for an alleged lack of solidarity at the start of the coronavirus pandemic.

Vucic was less critical of the EU this time, although he has said that he “felt sick” when he learned that some unnamed member nations secured vaccine doses multiple times above the number needed to inoculate their populations while holding back on deliveries to poorer countries.

Although Serbia is formally seeking EU membership, it has at the same time turned to both China and Russia which has also promised to supply large quantities of the Russian-developed Sputnik V vaccine.

Vucic's office said in a statement on Wednesday that he spoke with Russian President Vladimir Putin, urging him to deliver additional doses of the Russian vaccine “so Serbian citizens can get reliable protection from the coronavirus as soon as possible."

Vucic also said that Serbia will build a facility with the help of Russian experts to produce the Sputnik V vaccines.

There have been widespread concerns in the EU about the safety and effectiveness of the Chinese and Russian vaccines, as they have not followed all required trials before getting approval in their countries.

However, Hungary broke ranks with the EU by granting provisional licenses to both Sinopharm and Sputnik V. Russian scientists say Sputnik V appears safe and effective against COVID-19, according to early results of an advanced study published Tuesday in a British medical journal.

Vaccine delivery is turning into a foreign policy matter in the Balkans, which were promised EU help in securing does through the U.N.-backed COVAX Facility, but no shots have been delivered through the program so far.

Serbia managed to purchase the Chinese vaccine and smaller quantities of Sputnik V and the Pfizer-BioN-Tech vaccines through direct deals, helping the country launch one of the quickest vaccination campaigns in Europe.

Vucic urged China Wednesday to deliver the rest of the Serbia's ordered vaccines as soon as possible. He did not specify the quantity.