In leaders' UN videos, the backgrounds tell stories, too 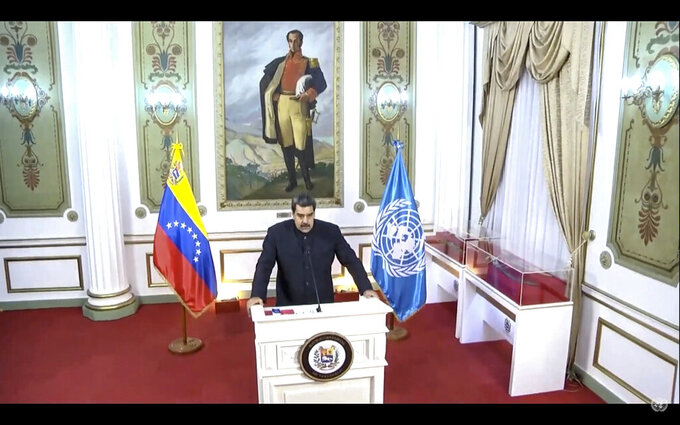 In this UNTV image, Nicolás Maduro Moros, President of Venezuela, speaks in a pre-recorded video message during the 75th session of the United Nations General Assembly, Wednesday, Sept. 23, 2020, at UN Headquarters. The U.N.'s first virtual meeting of world leaders started Tuesday with pre-recorded speeches from heads-of-state, kept at home by the coronavirus pandemic. (UNTV via AP)

UNITED NATIONS (AP) — Chinese President Xi Jinping urged the world to “reject attempts to build blocks to keep others out” as an image of his country’s storied Great Wall hung behind him. Philippines President Rodrigo Duterte used photos and videos to illustrate what he was talking about. Australian Prime Minister Scott Morrison shared his policy views — and his scenic view of Sydney Harbor.

If the annual U.N. General Assembly meeting of national leaders is always a window on the world, this year the window is opening directly onto their desks, presidential palaces and homelands.

Staying home because of the coronavirus pandemic, they are speaking by video, adding a new layer of imagemaking to the messages and personas they seek to project.

“They have to be authentic, they have to be believable, and this is even more of a challenge virtually. But it need not be, if you’re able to think about how to use your background creatively,” says Steven D. Cohen, a Johns Hopkins University business communication professor who has coached politicians.

“They can use what happens in the frame to complement those messages, to break through the glass of the computer and connect through stories, through visions," he says.

The General Assembly hall’s podium has provided decades of presidents, prime ministers and monarchs with a coveted portrait of statesmanship — and a setting conducive to it. While it’s no secret that many speeches are aimed largely at domestic audiences, sideline encounters and the prospect of live reactions from the international community can be “a factor for nudging people into what multilateral diplomacy is all about: finding common cause,” said Richard Ponzio, a former U.S. State Department and U.N. official and now a fellow at the Stimson Center, a foreign policy think tank.

Many leaders lamented that they can’t convene in person this year.

Others enhanced their presentations with subtitles or even cable-news-style chyrons, like “HOW WE CAN BUILD A BETTER FUTURE FOR ALL” and “WE MUST LEAVE NO ONE BEHIND” to underscore key messages from eSwatini’s prime minister, Ambrose Mandvulo Dlamini. Duterte overlaid parts of his speech with relevant photos and videos of coronavirus test centers, storms and more, going well beyond the maps and pictures that leaders occasionally hold up at the assembly podium.

Without the hall, some speakers opted for a more approachable posture. Pope Francis, for example, eschewed a podium to stand close to the camera in a bookcase-lined room, as though speaking to a visitor.

Many leaders sat at desks, sometimes giving the world a glimpse of personal photos, stacks of books and other presumably carefully curated workaday items, including a coffee cup for Mexican President Andrés Manuel López Obrador.

Speaking from a desk connotes being “friendly, conversational, trying to connect with people,” said Jim Bennett, executive director of the Virtual Meetings and Events Association, an event planners’ clearinghouse. But desks — especially large ones — also can signal authority.

Morrison chose an even more conversational setting: a sunny spot overlooking the city’s famous harbor and opera house, with boats passing in the background. Morrison, who has complained in the past about international institutions bossing countries around, called the virus a reminder of the importance of multinational cooperation, though he added that international institutions need to be “accountable to the sovereign states that form them.”

Fiji’s prime minister, Frank Bainimarama, had a crowd in the background of his speech for a special session on the U.N.'s 75th anniversary. After his remarks highlighting Fiji's role in peacekeeping missions and ocean preservation efforts, he and the spectators gave the U.N. a birthday cheer.

To be sure, many leaders spoke the traditional visual language of political speechmaking, flanked by flags with TV-friendly plain backdrops. Many others appeared in well-appointed offices and ceremonial rooms that could provide plenty of fodder for the decor-ranking that took flight online this spring as the pandemic forced TV commentators and other public figures to work from home. Kausea Natano, the prime minister of the Pacific island nation of Tuvalu, gave the global audience a picture of its tropical shore.

For heads of state, of course, a backdrop often speaks to more than individual taste.

Greek Prime Minister Kyriakos Mitsotakis’ against a panorama of the Acropolis and the Parthenon. In the background as Vietnamese President Nguyen Phu Trong spoke was a bust of revolutionary leader Ho Chi Minh — who, Trong said, aspired to see Vietnam join the U.N. long before it did in 1977, after decades of conflict.

Palau’s president, for one, used his video to send a more up-close-and-personal message in his final U.N. speech after serving as the Pacific island nation’s leader for 16 of the last 20 years.

With some points of pride in the background — a U.N. environmental award and baseball and basketball trophies from teams on which he played — and a bright pink polo shirt instead of the dark suits he wore to the assembly rostrum over the years, Tommy E. Remengesau Jr. reflected on what the group has and hasn’t tackled since he first addressed it in the wake of the Sept. 11 terror attacks in 2001.

“My message then was one of unity,” he said, and “this call remains apt today.”