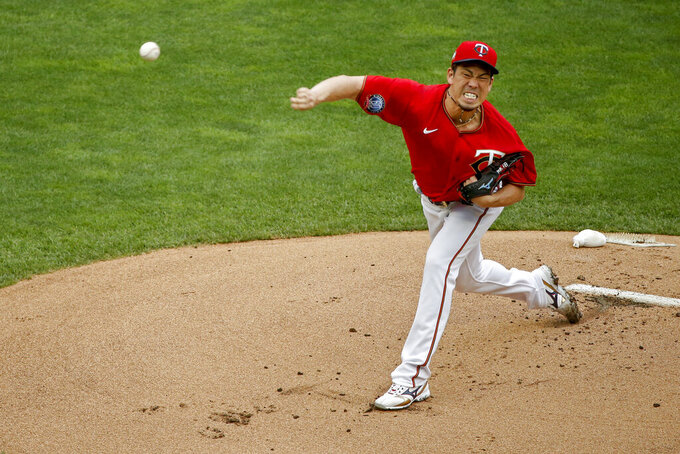 A look at what's happening around the majors on Thursday:

Star hitters Christian Yelich, Gary Sanchez, Hunter Pence and others are slumping badly in a season where hitters across the majors are struggling to find base hits. The league-wide batting average entering Wednesday’s games was .232, down from .252 last year. It’s the lowest mark ever, below the .237 average posted in 1968, despite the addition of the designated hitter to the NL.

Cuts are coming for players around the majors as teams trim their active rosters from 30 players to 28, per plans agreed to by MLB and the union before the start of this virus-shortened 60-game season. The sides decided Tuesday that rosters will remain at 28 through the World Series, instead of dropping to 26 on Aug. 20 as initially planned.

The Nationals will see how Max Scherzer is feeling, a day after the three-time Cy Young Award winner exited a start after just one inning because of trouble with his right hamstring.

Scherzer threw 27 pitches against the Mets and labored, his fastball in the low 90s mph. He said his hamstring problem first showed up a week ago, went away, then showed up again Tuesday when he was sprinting.

The Nationals already are missing World Series MVP Stephen Strasburg, who has a nerve issue in his pitching hand.

Guess which team is tied for the best winning percentage in the majors? The Miami Marlins, that’s who. The undermanned Marlins swept a seven-inning doubleheader Wednesday in Baltimore by scores of 1-0 and 2-1 to improve to 5-1 this season. They've won three straight against the Orioles since emerging from a coronavirus layoff that left them with a roster filled with call-ups, free agents and rookies. Miami allowed a total of one run and 10 hits in those three games at Camden Yards. Pretty impressive for a club that was inactive for eight days after 18 players tested positive for COVID-19. Miami, which lost 105 games last year, will try to keep it going against Baltimore as Don Mattingly looks for his 282nd win as Marlins manager, which would break a tie with Jack McKeon for the most in franchise history.

Kenta Maeda (2-0, 1.64 ERA) will try to remain unbeaten since being traded from the Dodgers to Minnesota in the offseason. The 32-year-old right-hander has helped the Twins open up quick this year. He pitches at PNC Park, with Pirates rookie JT Brubaker making his first major league start. Minnesota has won six in a row to match the best start in franchise history at 10-2. Pittsburgh has lost seven straight and owns the worst record in the majors at 2-10.

The Cardinals expect to have another workout at Busch Stadium while getting ready to resume their virus-interrupted season. St. Louis hasn’t played since June 29 -- at 2-3, its next game is scheduled for Friday night at home against the Cubs.

Quarantined in Milwaukee earlier this week after 13 positive COVID-19 tests in their traveling party -- All-Stars Yadier Molina and Paul DeJong among them -- the Cardinals returned to St. Louis on Wednesday and held a light workout.