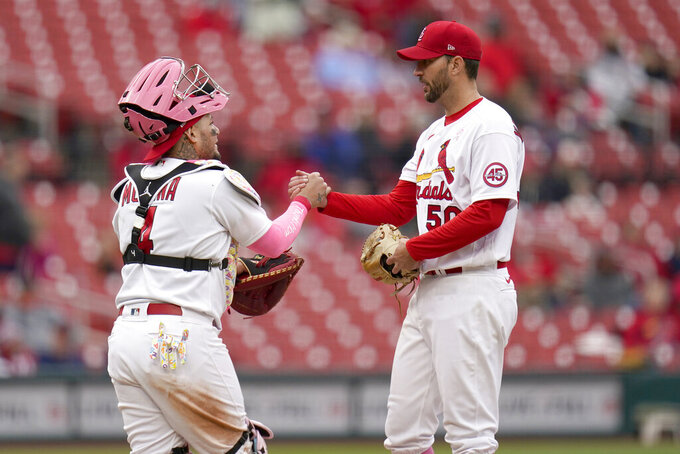 St. Louis Cardinals starting pitcher Adam Wainwright, right, is congratulated by teammate Yadier Molina before being removed during the ninth inning of a baseball game against the Colorado Rockies Sunday, May 9, 2021, in St. Louis. (AP Photo/Jeff Roberson)

Real soon, the sport will reach a big, round number: 20,000 total players.

There had been 19,989 players in MLB history going into the weekend, according to baseballreference.com, boosted by Seattle rookies Jarred Kelenic and Logan Gilbert making their debuts Thursday night.

First on the alphabetical chart is pitcher David Aardsma, who moved into the top spot ahead of Hank Aaron when he started out in 2004 for San Francisco. Aardsma’s last season was 2015 — that was the same year the player last on the list, pitcher Tony Zych, made his debut with the Mariners.

Of all the nearly 20,000 players so far to get into at least one game, 266 have reached the Hall of Fame. Walter Alston played two innings in his only game in 1936 for the Cardinals, striking out in his lone at-bat and making an error at first base — and later reached Cooperstown as the longtime manager of the Dodgers.

Now the New York Yankees are dealing with a couple of significant injuries, in addition to their coronavirus issues.

Center fielder Aaron Hicks had an MRI that revealed a torn tendon sheath in his left wrist. Yankees manager Aaron Boone said Friday the team will initially try to treat the injury with medicine, and if that goes well, Hicks could be available this weekend in Baltimore. But he could require surgery if the medicine is not effective.

“I think it could go either way,” Boone said.

New York slugger Giancarlo Stanton was scratched with left quad tightness less than an hour before the first pitch Friday night. His status for the rest of the Orioles series is uncertain.

However, the Yankees didn’t have any new positive tests for COVID-19 to add to their eight cases already, Boone said.

The team revealed earlier this week that shortstop Gleyber Torres tested positive for the coronavirus despite being fully vaccinated and having previously had COVID-19.

Pittsburgh also is sending an Anderson to the mound, with Tyler Anderson (3-3, 3.05 ERA) going against Johnny Cueto and the San Francisco Giants.

White Sox left-hander Carlos Rodón tries to extend his perfect start when he faces Mike Minor and the Kansas City Royals. Rodón (5-0, 0.58 ERA) is the first White Sox pitcher to win his first five starts since Chris Sale began the 2016 season with nine in a row. Rodón was slated to go on Thursday, but he was pushed back because of back and hamstring tightness. He tossed six innings of five-hit ball during a 3-0 win at Kansas City on May 7. Minor (2-2, 5.75 ERA) is looking for his first win since April 23.

Adam Wainwright (2-3, 3.80 ERA) pitches for the NL Central-leading St. Louis Cardinals at San Diego in a rematch of last year’s first-round playoff won by the Padres.

Wainwright is coming off 8 1/3 innings of three-hit ball Sunday in a 2-0 win over Colorado, but the 39-year-old right-hander is 0-1 with a 6.52 ERA in two starts away from home this season. He allowed two runs and six hits in Game 2 of the first-round series at San Diego last year, getting a no-decision in the 11-9 loss.

Chris Paddack (1-3, 4.78) takes the ball for a Padres team depleted this week by COVID-19 positives and contact tracing health and safety protocols.