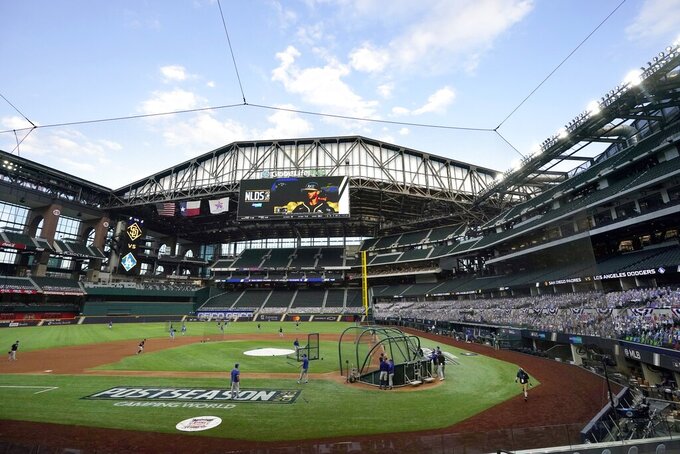 The roof at Globe Life Field is opened as the Los Angeles Dodgers take batting practice before Game 3 of the baseball team's NL Division Series against the San Diego Padres on Thursday, Oct. 8, 2020, in Arlington, Texas. (AP Photo/Tony Gutierrez)

A look at what's happening around the majors Saturday:

The Tampa Bay Rays have more revenge in mind heading to the AL Championship Series.

Mike Brosseau hit a tiebreaking homer in the eighth inning off All-Star closer Aroldis Chapman on Friday night, propelling Tampa Bay past the rival Yankees in their AL Division Series. It was a sweet piece of vengeance for Brosseau after Chapman buzzed a 101 mph fastball over his head during the regular season, escalating tensions in an already bitter rivalry. Brosseau downplayed their past drama.

“No revenge,” he said. “We put that the past. We came here to win the series.”

The Rays' reward: a rematch with the Astros, the team that knocked them out of the 2019 postseason.

“They’ve been the team to beat the last few years,” Brosseau said. “They knocked us out last year, so it will be fun to face them again.”

Game 1 will be Sunday night in San Diego. Houston will have a fully rested rotation, with Lance McCullers Jr. or Framber Valdez most likely to get the ball. The Rays will likely throw 2018 AL Cy Young Award winner Blake Snell.

Baseball's postseason gets a full day off from games before the AL Championship Series opens Sunday. In the meantime, the Rangers and MLB are preparing Globe Life Field in Arlington, Texas, to host baseball’s first in-person fans of this virus-altered season Monday.

Tickets are already sold out for the opener of the neutral-site NL Championship Series between the Braves and Dodgers, although plenty are available on the secondary market. MLB is selling 11,500 tickets for each NLCS and World Series game at the Rangers’ ballpark, 28% of capacity.

Tickets are being sold in pods of four, and each pod will be spaced at least six feet from other fans — a move MLB hopes will keep onlookers safe inside the stadium. Masks will be mandatory, concessions and parking will be cashless, and the team’s concessionaire is planning wrapped items.

Astros manager Dusty Baker is managing in the postseason with his fifth different franchise, but this one has certainly been different. The 71-year-old was hired in late January after AJ Hinch was fired in fallout from Houston’s sign-stealing scandal, and his introduction to Houston’s clubhouse was cut short in mid-March by the coronavirus pandemic.

Baker said it took until the tail-end of the 60-game regular season for him to really feel like Houston was his team.

“For a while, I kind of felt like a substitute teacher,” he said. “I didn’t know which guys were stubborn or sensitive. They didn’t know how honest or truthful to be with me or what would tick me off or make me happy. Now I’m turning into a permanent teacher the last month or so.”

After an improbable run to the playoffs, the Marlins confronted a hard reality in the NL Division Series: They still can’t beat the Braves.

The Marlins were sent to the sideline later than usual, but forcefully, when Atlanta completed a best-of-five sweep with a 7-0 win Thursday. The three-game drubbing showed the Marlins their great leap forward this year left them still a ways from overtaking their NL East rivals.

“You have to measure yourself with them, and have to be able to beat that club,” Miami manager Don Mattingly said. “We feel like we’re getting closer, but they let us know where we’re at.”

Sixto Sánchez and Miami’s other young pitchers had promising seasons, but the offense needs a boost. The Marlins’ productivity increased by more than half a run per game from 2019, but only four teams hit fewer homers, and their OPS ranked 23rd.

Miami expect prospects to help the offense continue to trend upward in 2021.

“We’ve got a number of guys who are going to have to take a step forward,” Mattingly said. “And there are other cats coming, too. There is going to be a lot of competition for jobs.”